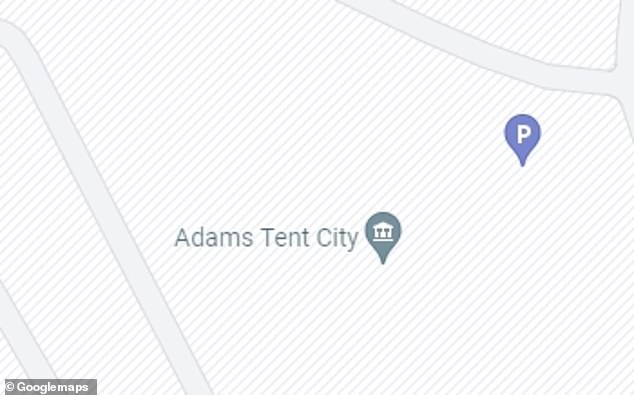 
Google Maps now shows a cheeky label for the location where New York City Mayor Eric Adams has decided to house asylum seekers in the city.

Rather than reading ‘Humanitarian Emergency Response and Relief Center’ – as Adams called the soon to be opened center on Randalls Island – the website has the facility tagged as ‘Adams Tent City.’

The tag appears when navigating over the northwest coast of the remote island between Manhattan and Queens, but is only visible when zoomed in to about 100ft above ground level.

The label even auto fills with an address in the search bar, which takes viewers right to the location.

It is unclear whether the tag was added by Google itself, or by a user having fun with location features which allow business owners to identify their storefronts.

On the ground and in person, the label is not far off the mark. Adams has set up a number of massive tents on the island, each of which are filled with hundreds of cots, couches, and rows of folding tables and chairs, and even fully equipped industrial kitchens. 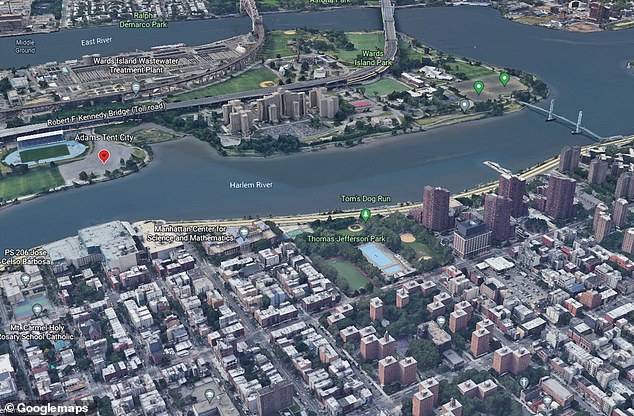 Adams Tent City as it appears in Google Maps searches. The facility is located on Randalls Island 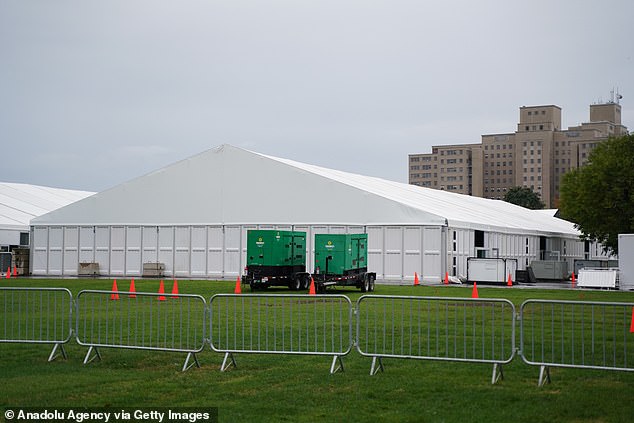 On the ground and in person, the label is not far off the mark. Adams has set up a number of massive tents on the island, each of which are filled with hundreds of cots, couches, and rows of folding tables and chairs, and even fully equipped industrial kitchens

On Tuesday, Mayor Adams tweeted out a pictures from inside the facility and a video of him touring the inside of the tents.

‘Spent last night at Randall’s Island inspecting our facility to care for asylum seekers,’ he wrote. ‘Care is the key word.’

‘We’re providing medical care, places to sleep, connection to legal services, laundry and more,’ he said. ‘We didn’t ask for this crisis but we’re meeting the moment.’

Adams announced plans to open the center just a month ago, and characterized it as a modern day Ellis Island.

‘More than 100 years ago, Ellis Island opened its doors to welcome in those ‘yearning to breathe free,” he said.

‘Now, more than ever, it’s clear that we are again dealing with a humanitarian crisis created by human hands.

‘While other leaders have abdicated their moral duty to support arriving asylum seekers, New York City refuses to do so.’

The facility is capable of housing up to 500 migrants at a time. It remains unclear when the facility will open, with the city saying only that it will ‘soon’ as of October 12. 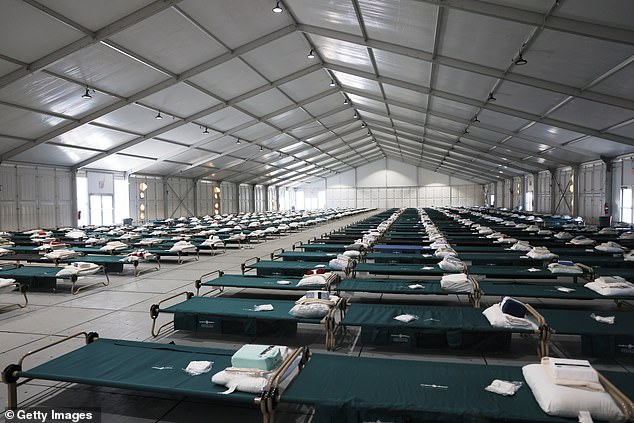 Rows upon rows of cots set up at the facility on Randalls Island. The center is capable of housing 500 people 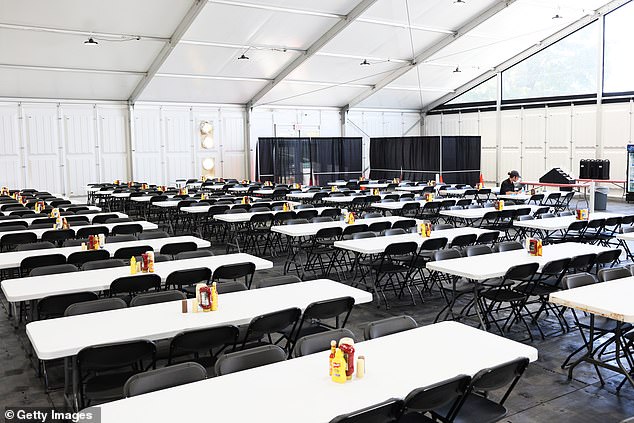 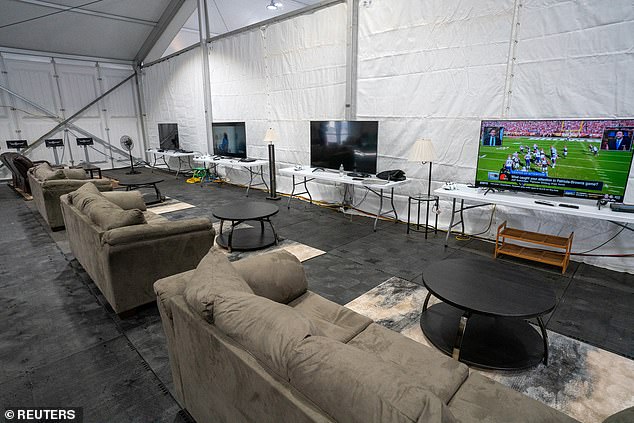 The project has been mired in controversy since its announcement, with critics decrying it as a waste of taxpayer dollars that New Yorkers sorely need.

Construction on the project originally began at a location in the Bronx, but that work was scrapped after ten days due to water drainage issues and the facility was moved to Randalls Island.

Adams has refused to comment on how much money that location change cost the city.

‘Once we get the exact cost, we will give it to you. We don’t do anything prematurely so you can say, ‘Eric lied on the cost,” he said in a defensive press conference earlier this month. ‘So, we’re going to give it once we get it.’

No matter the excuses, many said the project has been needlessly wasteful.

‘It’s sickening to see the way the city and the federal government are wasting taxpayer money to deal with problems they created that are totally avoidable,’ said US Rep. Nicole Malliotakis, according to the New York Post.

‘It’s frustrating to see the way money is thrown away by the city, state and federal governments at a time when we are dealing with budget issues, a $31 trillion debt and an economy where New Yorkers and Americans are struggling to get by,’ she said. 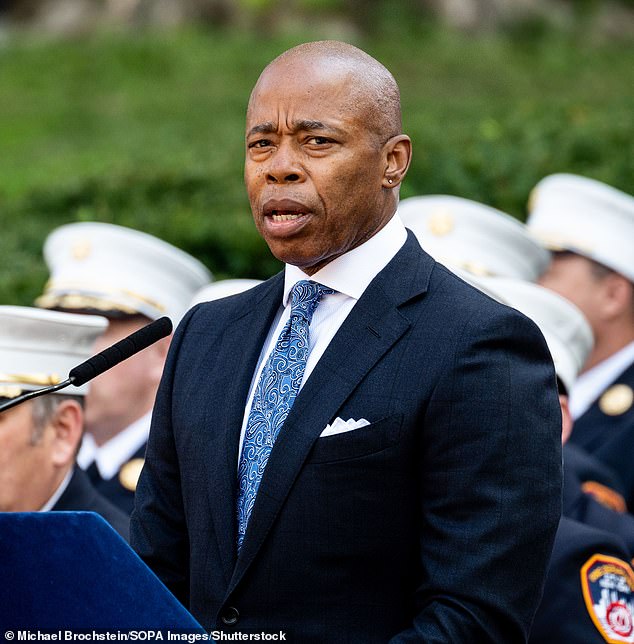 Controversy around the migrant center comes as thousands of asylum seekers have begun arriving in New York City, prompting Mayor Adams to declare a state of emergency and request billions of dollars in federal aid.

About 1,800 asylum seekers from Latin America arrived in NYC in just one weekend in early October, just as Adams asked for $1billion in federal funding to deal with the crisis.

‘Those numbers are unbelievable – 1,800,’ Adams said over Columbus Day. ‘We need every level of government to participate in dealing with this crisis that we are facing.’

‘You know, over just the last few days to receive those large numbers, it’s a strain on our system and we have to make sure we get the support that we need.’

As of Columbus Day, nearly 20,000 migrants had made their way to the Big Apple from border states, according to NY Daily News.

The recorded number stands at 19,200, according to Adams’ officials, however it is likely even more than that as this is just the number of migrants who have come through the shelter system in the five boroughs. 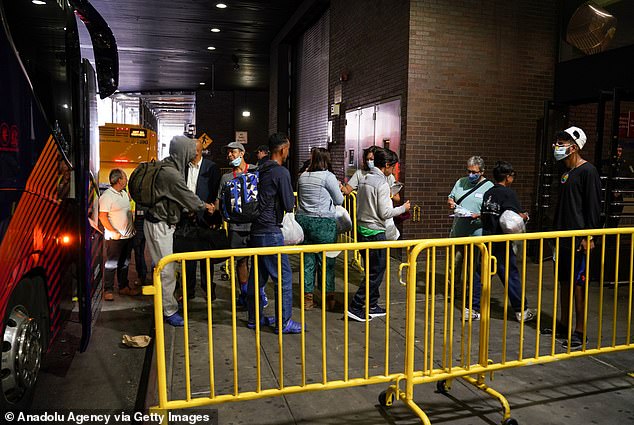 Adams warned that the Randalls Island facility is likely just the first of its kind to come to the city, and predicted that there would soon be emergency shelters in ‘every community’ in the city, and they should expect to see them ‘without warning.’

Adams noted that every borough would be ‘impacted’ by the crisis during a news conference at Yankees Stadium in the Bronx on October 12.

‘Every community is going to see asylum-seekers,’ Adams said.

The mayor has noted that the city’s shelters are already near 100 percent capacity, with about 61,000 people in the system, 20,000 of which are children. 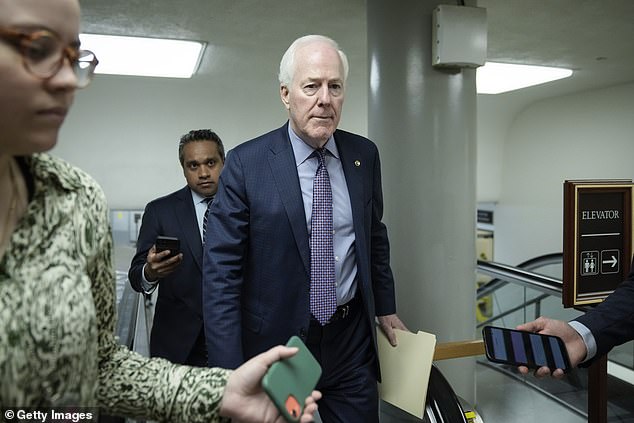 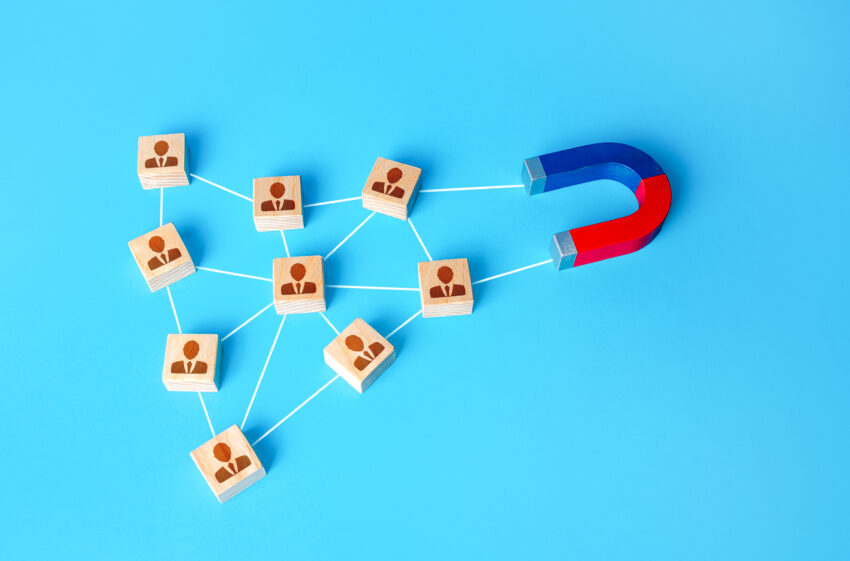 7 Benefits Of Networking For Small Businesses 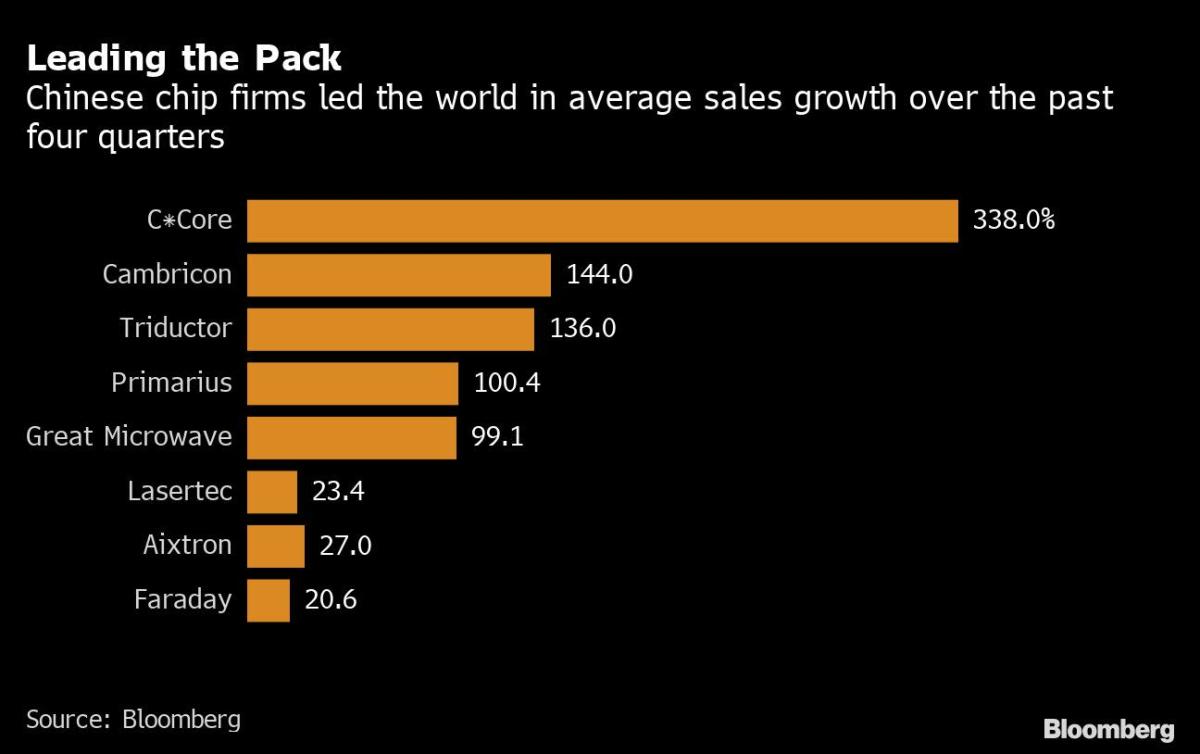