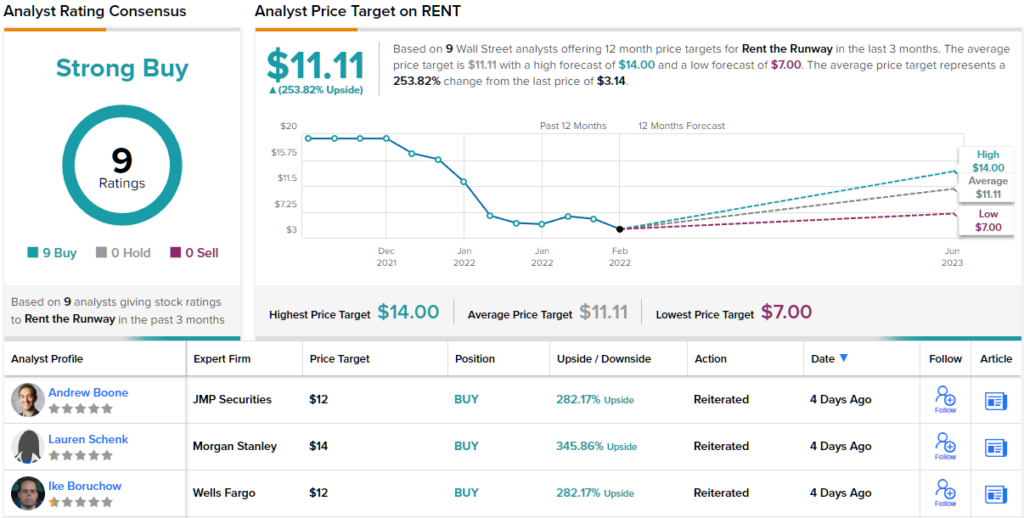 
Stocks are down, that’s a given in almost any corner of the market, with – broadly speaking – only the energy sector and some outliers providing investors with any cheer in 2022.

When will the tide turn? That’s anyone’s guess, but until it does, investors will need to hang tight and hope the cloudy macro picture clears eventually.

However, that does not mean opportunities have completely dried up; the nice thing about the market-wide pullback is that some names have retreated to such an extent, they now offer exceptional value.

Accordingly, the stock analysts at leading investment bank Goldman Sachs have homed in on two names which are down, but far from out. In fact, the analysts see them both claiming triple-digit gains over the coming year. Using the TipRanks database, we can also find out how these names fare amongst other Street analysts. Let’s dive in.

We’ll start off with a company that does exactly what it says on the tin. At Rent the Runway, you can basically get your hands on high-end fashion items for a short period, use them for whatever occasion and then hand them back. The company sees itself as a disruptor of the trillion-dollar fashion industry, offering its female clientele membership plans, with the platform boasting a huge selection of items from leading brands – who also stand to benefit from expanding their reach. The company also touts its Closet in the Cloud service as the world’s first and biggest shared designer closet.

The world might be beset by soaring inflation, war in Europe and a slowing global economy, but consumers still want to slip into some nice clothes whatever the macro conditions offer. That could be the conclusion following the company’s latest quarterly statement – for 1Q22.

RENT beat both the top-and bottom-line estimates. Revenue doubled year-over-year to reach $67.1 million while EPS came in at -$0.67. Wall Street analysts expected $64.1 million and -$0.73, respectively. At the same time, active subscribers increased by 82% from the same period last year while gross margins saw a 9% uptick. Even better, the Q2 outlook called for revenue between $72 million and $74 million – above the consensus estimate of $70.46 million.

Nevertheless, RENT’s share price has fallen 61% so far this year. This doesn’t mean that the stock is unsound, according to Goldman Sachs analyst Eric Sheridan.

“Looking forward, our view remains that RENT is levered to a broad re-opening economic dynamic and could prove to be more economically resilient as luxury consumers look for more affordable and flexible options in a more challenged economic environment. Long term, we still see RENT as the leader in the subscription-based effort to drive the adoption of the sharing economy theme in the apparel sector,” Sheridan opined.

“In our view, RENT has created a two-sided discovery engine on its platform which allows consumers to find/explore a wide range of apparel choices and allows brand designers to scale their businesses while also finding a consumer cohort that helps their brands expand their audience,” the analyst added.

The verdict? Sheridan gives RENT a Buy rating along with a $9 price target. Based on this target, shares are expected to climb ~187% higher over the one-year timeframe. (To watch Sheridan’s track record, click here)

The rest of the Street is just as confident; a full house of Buys – 9, in total – make the consensus view on this stock a Strong Buy. Going by the $11.11 average target, shares will add 254% over the next 12 months. (See RENT stock forecast on TipRanks)

Everybody knows Moderna now, but rewind to the start of 2020, and the vaccine giant was hardly known beyond biotech circles. Then came the Covid-19 pandemic and turned Moderna into a household name. You could make the argument it is the pandemic era’s greatest success story and one entirely built on a sole product – mRNA-1273 (Spikevax), its Covid-19 vaccine which was pipped to the approval post only by Pfizer/BioNTech’s offering.

The problem for Moderna in the post-pandemic world is twofold; one, what comes next as the Covid vaccine is still its only approved product and lone revenue generator. And secondly, with the pandemic on the backfoot in most parts of the world, how many eggs has this golden goose still got in it?

As for the former, the company has a bulging pipeline with 46 mRNA drugs in development, with mostly vaccines and some therapeutics targeting 4 different areas – infectious diseases, immuno-oncology, rare diseases and autoimmune disease.

As for the latter question, the company just reported positive interim Phase 2/3 data for its Omicron-containing COVID booster candidate mRNA-1273.214. Moderna is readying the regulatory filing which it should submit in the coming weeks and will hopefully allow for the vaccine’s use as a fall booster.

It is this anticipated tailwind along with the underappreciated pipeline which informs Goldman’s Salveen Richter’s bullish thesis.

“We expect shares to rise on an announcement of US government purchasing of new vaccines for the fall as it would show the potential for upside to MRNA’s estimated ~$21bn in Advance Purchase Agreements (APAs),” the 5-star analyst explained. “Broadly, we believe investors are underestimating the optionality of MRNA’s platform which has been significantly de-risked by the billions of vaccinations given over the past two years using mRNA technology.”

Following the huge gains made during the pandemic, investors’ concerns over Moderna’s future along with the negative macro developments have sent shares tumbling – they are now down ~54% since the turn of the year.

Richter, though, is anticipating a meaningful recovery; the analyst has a Buy rating for the shares backed by a $290 price target. The implication for investors? Upside of 147%. (To watch Richter’s track record, click here)

What does the rest of the Street make of Moderna’s prospects? It’s a mixed bag; based on 5 Buys and Holds, each, plus 1 Sell, the analyst consensus rates the stock a Moderate Buy. However, most feel the shares are now undervalued; going by the $215 average target, they are anticipated to appreciate ~84% in the year ahead. (See Moderna stock forecast on TipRanks) 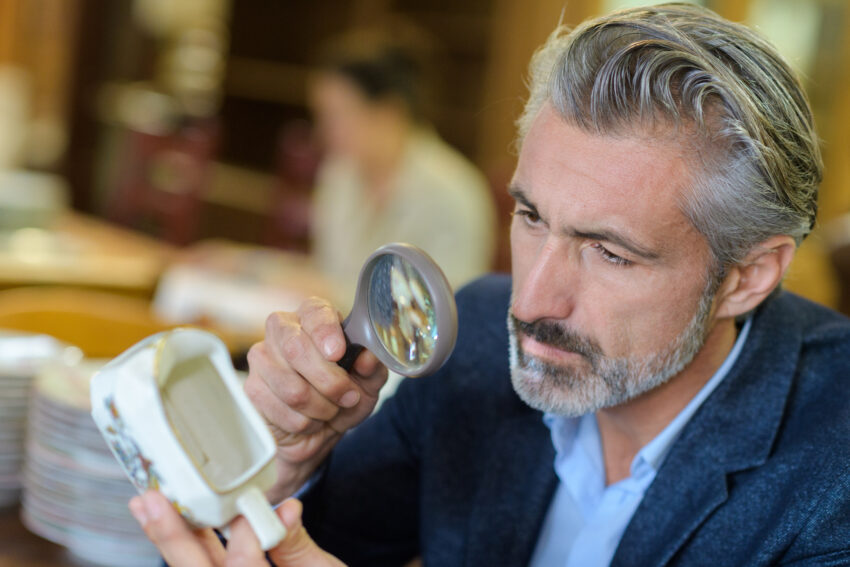 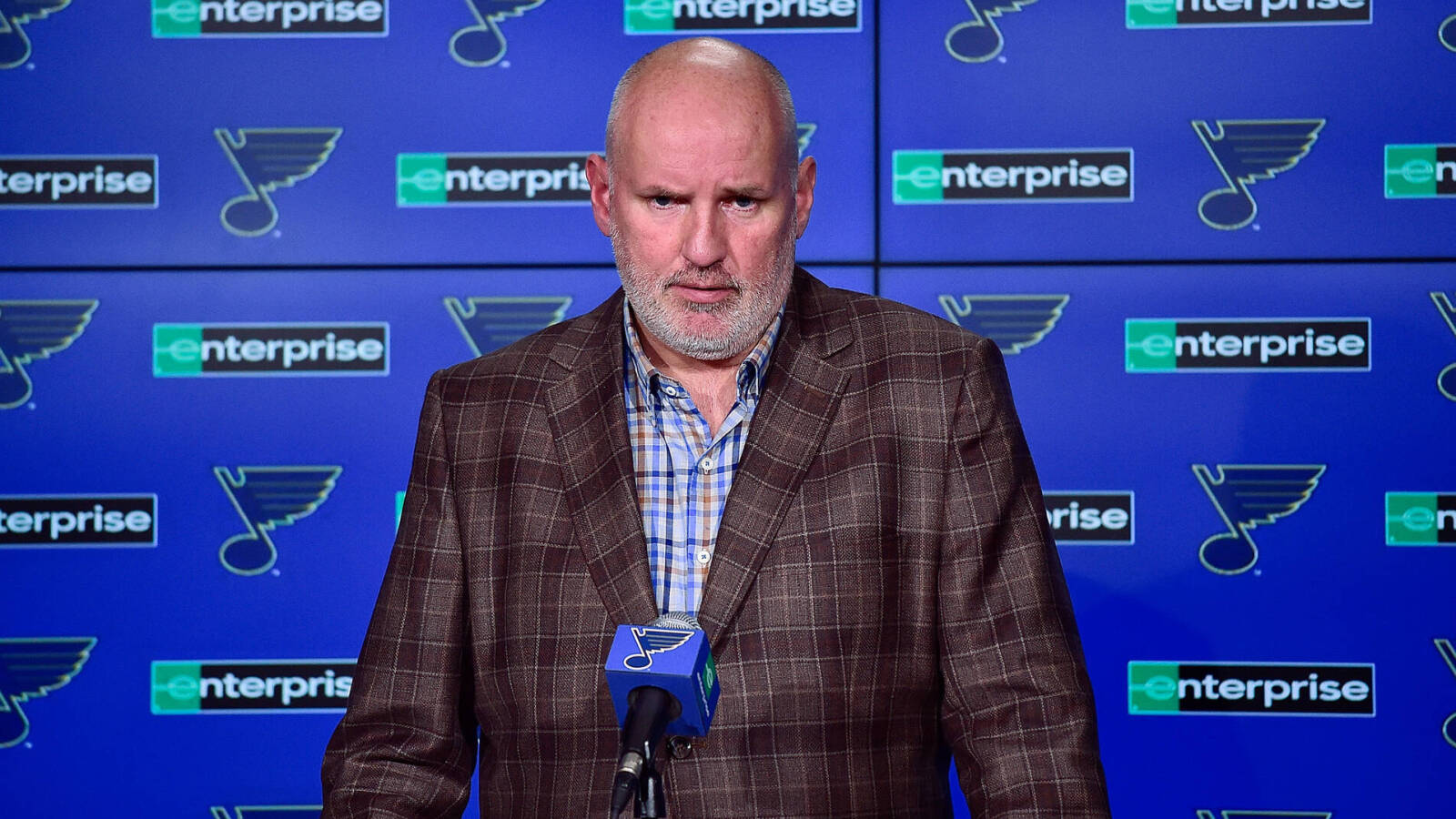 Five NHL teams that have been all-too-quiet this offseason

Apple’s iPhone 14 Event: How to Watch and What to Expect