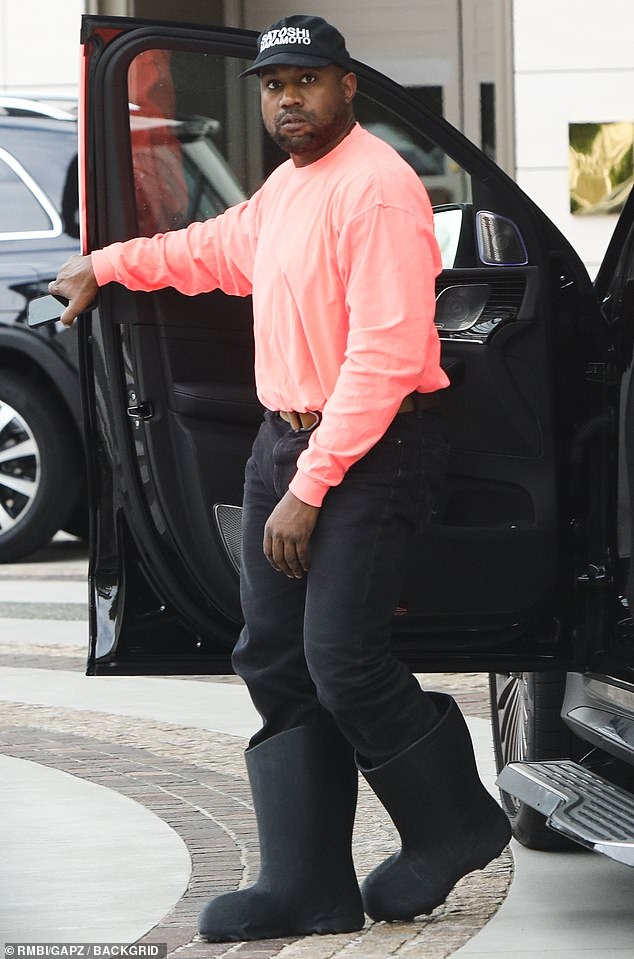 
Kanye West is going into business with conservative commentator Candace Owens’s CEO husband as the rapper enters into a deal to buy the ‘free speech platform’ Parler after he was kicked off Twitter for anti-Semitic posts.

The deal was announced early Monday with West saying it would ensure conservative opinions can be ‘freely expressed.’

The acquisition of Parler would give the rapper control of a social media platform and a new outlet for his opinions with no gatekeeper.

The deal comes after West dominated the headlines for his controversial decision to wear a ‘White Lives Matter’ T-shirt alongside conservative commentator Candace Owens, at his show during Paris Fashion Week.

‘Ye is making a groundbreaking move into the free speech media space and will never have to fear being removed from social media again.’

Nashville-based Parler, which has raised about $56 million till date, said it expects the deal to close during the fourth quarter of 2022. It was not disclosed how much West would be paying for the deal.

Kanye West, pictured in Beverly Hills on Sunday, is going into business with Candace Owens’ CEO husband George Farmer as the rapper enters into a deal to buy Parler 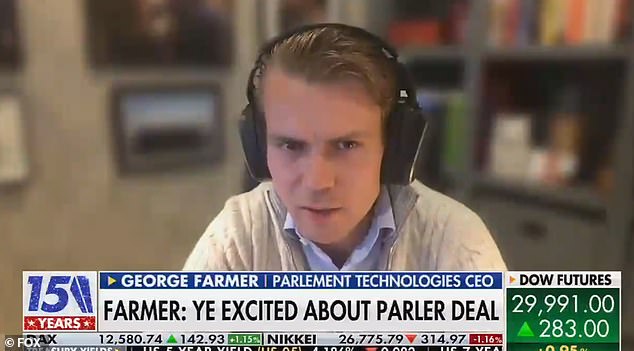 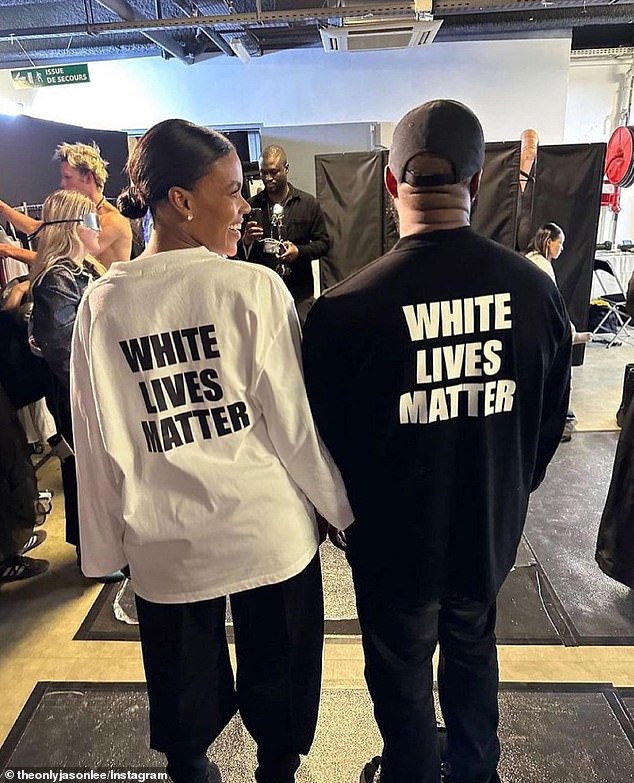 ‘Once again, Ye proves that he is one step ahead of the legacy media narrative. Parlement will be honored to help him achieve his goals,’ he added.

Farmer, who is the son of Lord and former Conservative Party treasurer Lord Michael Farmer, met Owens in 2018 at Turning Point UK and the couple married in 2019 at the Trump Winery in Charlottesville, Virginia.

The acquisition of Parler comes in response to what West calls his ‘recent censorship from Big Tech’ – after West’s Twitter and Instagram accounts were recently blocked because of anti-semitic posts by the rapper.

‘In a world where conservative opinions are considered to be controversial we have to make sure we have the right to freely express ourselves,’ West – who joined the platform on Monday – said, according to the statement.

The deal comes after Tesla CEO Elon Musk – who is in the process of acquiring Twitter – suggested that he’d like the platform to relax its moderation policies under his stewardship, and possibly reinstate Trump’s account. 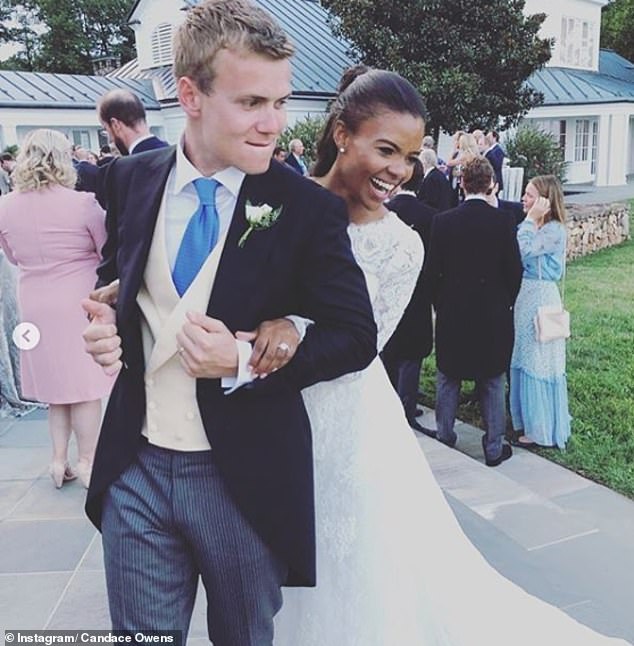 George Farmer, who is the son of Lord and former Conservative Party treasurer Lord Michael Farmer, met Owens in 2018 and the couple married in 2019 at Trump Winery in Charlottesville 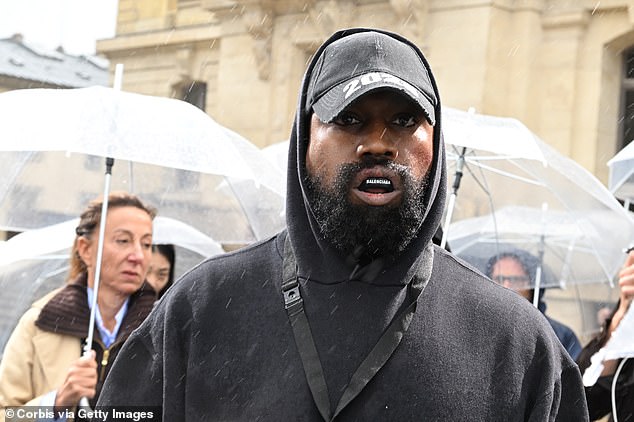 West, pictured at the Givenchy Womenswear Spring/Summer 2023 show as part of Paris Fashion Week in October 2022, will have a new outlet for his opinions with no gatekeeper 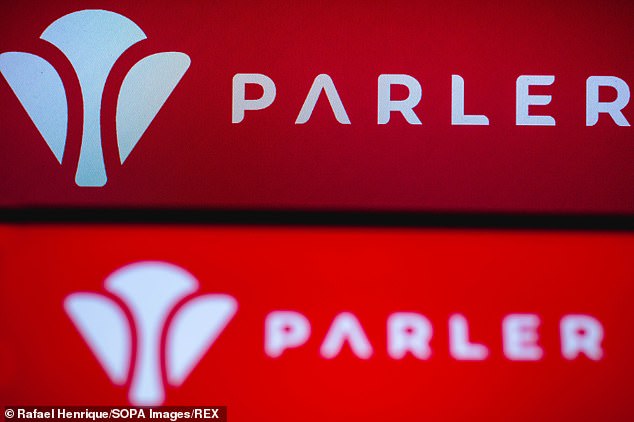 Parlement Technologies said in a statement it had reached an agreement in principle to sell ‘the world’s pioneering uncancelable free speech platform, to Ye’ (formerly West) 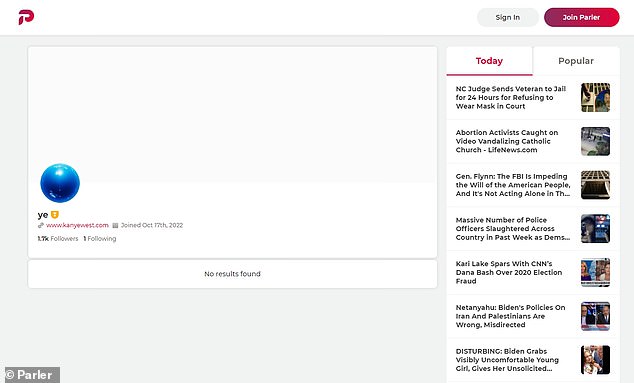 The acquisition could breathe new life into Parler, which has struggled amid competition from other conservative-friendly platforms like Truth Social. Pictured: Ye’s Parler account is live

Parlement Technologies said in a statement it had reached an agreement in principle to sell ‘the world’s pioneering uncancelable free speech platform, to Ye (formerly known as Kanye West).’

Yet, social media users were quick to criticize the rapper’s new venture.

‘Kanye West buying Parler was pretty much the only logical answer to the question, ‘What stupid thing could he possibly do next?’ one user said.

Another grouped the rapper in with Musk’s own social media platform venture: ‘Lol’ing – Kanye West is buying Parler, and Elon Musk is buying Twitter because of their fragile egos.’

‘Kanye West said he wants to buy Parler – the haven of hate, the cesspool of bigotry – one of the darkest places on social media – the place where terrorists go to socialize.

This is beyond mental illness folks.’

Social media users were quick to criticize the his new venture, many saying it must be a joke 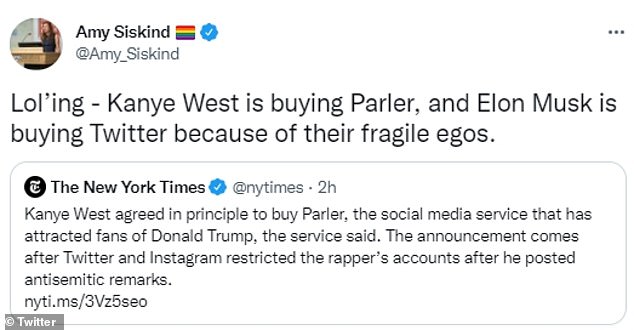 Another commenter grouped the Ye in with Musk’s own social media platform venture: ‘Lol’ing – Kanye West is buying Parler, and Elon Musk is buying Twitter because of their fragile egos’ 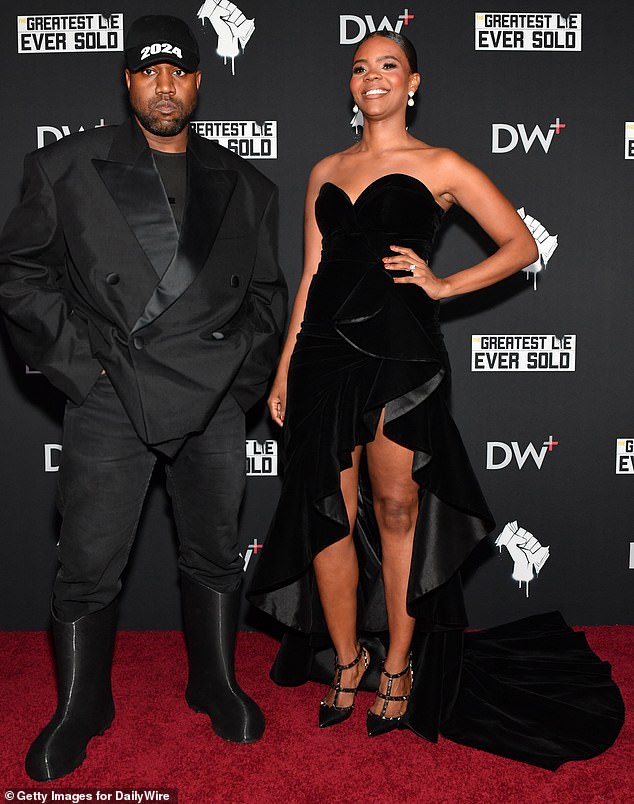 The rapper, who has a history of mental illness, appeared on October 12, 2022, at the Nashville premiere of Candace Owen’s new documentary, The Greatest Lie Ever Sold, which accuses the BLM organization of misappropriating millions of dollars in donations

The acquisition could breathe new life into Parler, which has struggled amid competition from other conservative-friendly platforms like Truth Social.

Parler, a micro-blogging app similar to Twitter launched in 2018, styles itself as being the anti-tech social networking service.

It is associated with supporters of Trump, conservatives, far-right extremists and conspiracy theorists.

It has been criticized for not policing hate speech – such as antisemitism – with users including those that have been banned from other mainstream social networks.

It didn’t start picking up steam until 2020. But it was kicked offline following the Jan. 6, 2021 attack on the U.S. Capitol. A month after the attack, Parler announced a relaunch. It returned to Google Play last month. 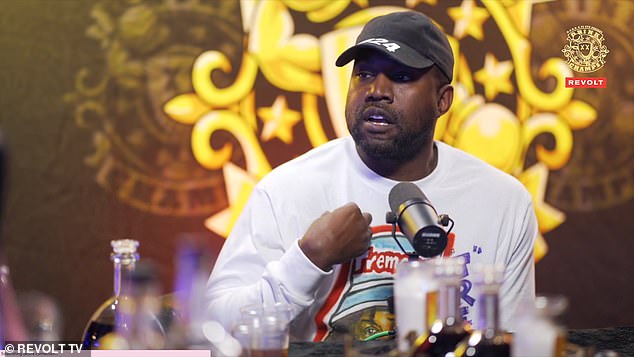 West, who still receiving criticism for his tweet in which he claimed to be going ‘def con 3’ against Jewish people, made new remarks on Revolt TV’s Drinks Champs podcast Sunday 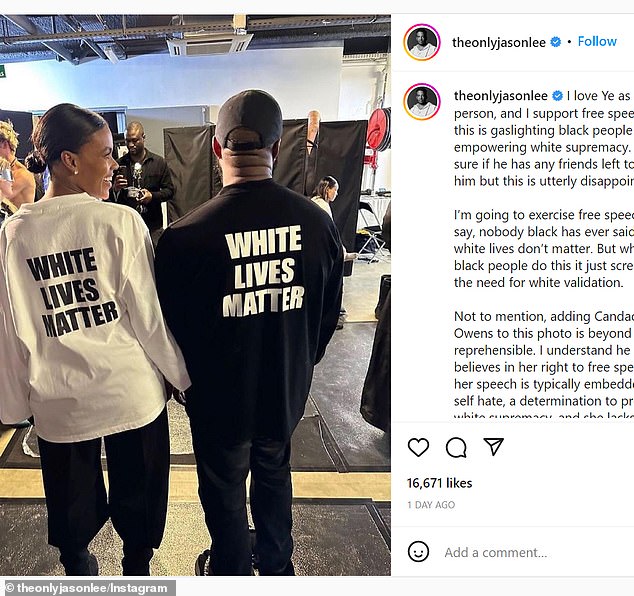 Parler’s user base grew hugely in 2020 where it had limited content moderation, but after reports it had been used to coordinate the January 6, 2021 storming of the U.S. Capitol building in Washington D.C., several companies took steps against it.

Both Apple and Google removed the app from their respective app stores, while the app went offline on January 10 that same year when Amazon Web Services cancelled its hosting websites. At this point, the company claimed to have 10 million users.

Versions of the app with content filters have since been re-added to the Apple and Google app stores.

The announcement comes after West continued his attacks on Jewish people by saying that ‘Jewish media’ blocked a recent interview while also claiming – contrary to the coroner’s report – that fentanyl caused George Floyd’s death in 2020.

West, 45, who still receiving major criticism for his tweet last week in which he claimed to be going ‘def con 3’ against Jewish people, made new remarks during an appearance on Revolt TV’s Drinks Champs podcast, released on Sunday.

The podcast is hosted by former rapper Noreaga aka N.O.R.E and DJ EFN. 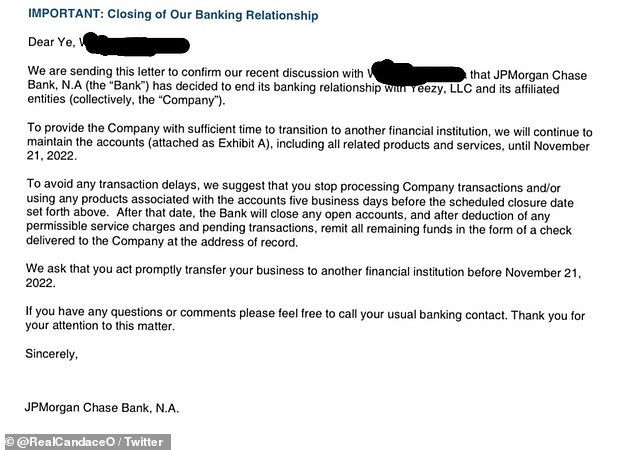 JP Morgan Chase broke up with Kanye in this letter that was posted by Candace Owens on Twitter. Kanye has been locked out of his accounts

West ranted in his Drinks Champs interview: ‘Could you even really run this interview? Because Mav didn’t run my interview. You know what I’m saying? They blocked me out.

In other sections of the interview, West said that ‘Jewish people control the black voice,’ and sarcastically stated that the ‘Jewish media’ would cancel one of the hosts for saying: ‘F**k Black Lives Matter.’ 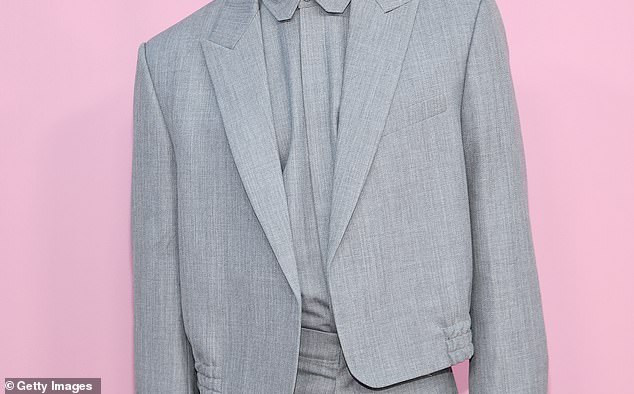 Virgil Abloh, the fashion designer who passed away in November 2021 following a short battle with cardiac angiosarcoma, a rare, aggressive form of cancer. He was 41 years old 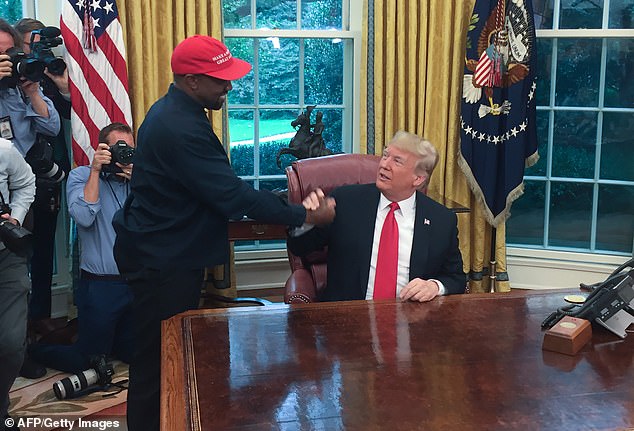 Donald Trump meets with rapper Kanye West in the Oval Office of the White House in Washington, DC, October 11, 2018 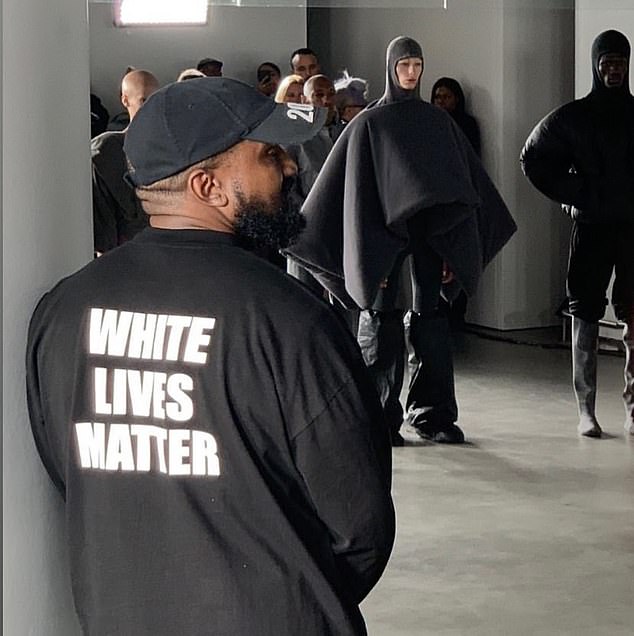 Shocker: Kanye West made a statement at his surprise Yeezy fashion show on Monday, wearing a black sweatshirt with the slogan ‘White Lives Matter’ written across it; seen Monday

Infamously, West said of the anti-Semitism allegations: ‘The funny thing is I actually can’t be Anti Semitic because black people are actually Jew also. You guys have toyed with me and tried to black ball anyone whoever opposes your agenda.’

Kanye West was referring to a scene on The Kardashians where Kim, 42, spoke about how she slept with Pete, 28, in front of a fireplace in a tribute to her grandmother.

She said her grandmother had told her ‘you really live life’ if you have sex in front of a fireplace.

Kanye told N.O.R.E and DJ EFN on Drink Champs:  ‘It’s Jewish Zionists that’s about that life, that’s telling this Christian woman that has four black children to put that out as a message in the media.’

He continued: ‘So when I drive by and I see the Hulu ads and I see the JP [Morgan Chase] ads, I’m gonna let y’all know right now, the devil is a defeated foe – you can’t poison me.’

Kardashian filed from divorce from West in February 2021.

The former couple are parents to four children: North, Saint, Chicago and Psalm.

Kim and Pete were together from October last year to August. 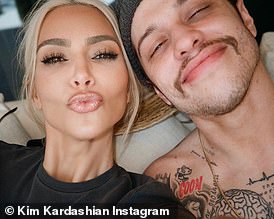 This week, JP Morgan Chase ended its relationship with West, giving him until November 21 to remove his funds from their bank. The bank has not gone into details about the termination.

On Wednesday, it was announced that West’s interview on The Shop, would not air. The show’s co-host, Maverick Carter said in a statement that the reason it was pulled was because West: ‘used to reiterate more hate speech and extremely dangerous stereotypes.’

Carter’s usual co-host, LeBron James, was not present for the taping.

Later in his Drinks Champs interview, West said of George Floyd’s death at the hands of Officer Derek Chauvin in Minneapolis in 2020: ‘He said a prayer for eight minutes, they hit him with the fentanyl. If you look, the guy’s knee wasn’t even on his neck like that.’

Bizarrely, West goes on to say that Floyd’s death made him think of his ‘friend’ Virgil Abloh, the fashion designer who passed away in November 2021 following a short battle with cardiac angiosarcoma, a rare, aggressive form of cancer.

The American rapper, who has a history of mental illness, had announced in 2020 that he would run for U.S. President in an apparent challenge to former U.S. President Donald Trump, but later pulled out.

West last month ended a partnership with apparel company Gap Inc, saying it failed to meet its obligations under the contract.

The Life of Pablo rapper wore a shirt reading ‘White Lives Matter’ at his YZY fashion show on October 3.

Fashion models in the rapper’s show also wore clothing with the message written across it, a response to the Black Lives Matter movement that was founded in 2013 following the fatal shooting of Trayvon Martin by George Zimmerman.

Also posing with West was the right-wing commentator Candace Owens, who beamed while wearing a complementary version of the ‘White Lives Matter’ shirt.

Kanye has aligned himself with right-wing figures such as Owens, as well as former President Donald Trump, regularly sporting a Make America Great Again baseball hat in public.

It is not the first time that Ye has stoked controversy surrounding race, after saying in 2018 that he thought 400 years of slavery ‘was a choice.’ 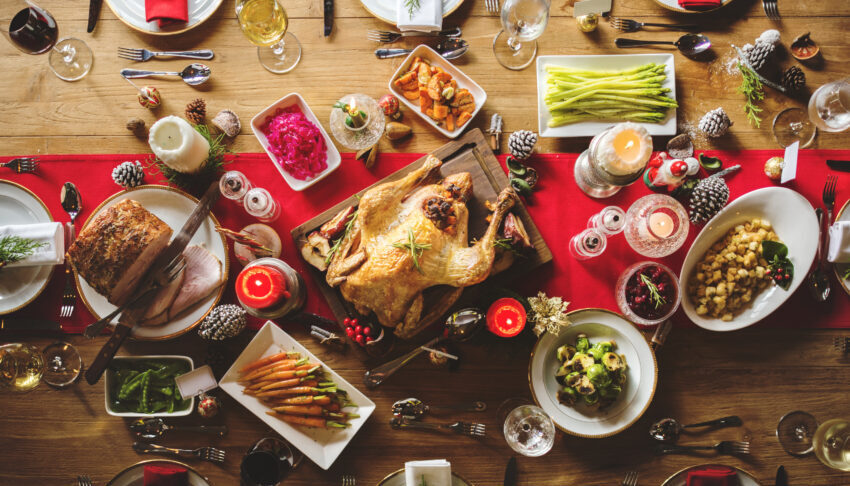 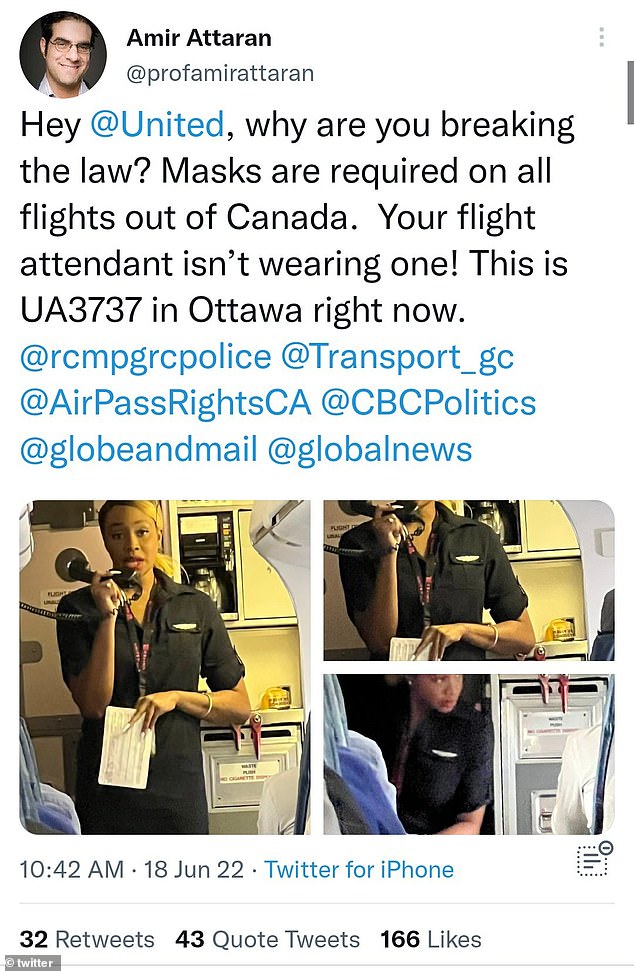 The U should pause — but not retire — the Turnover Chain