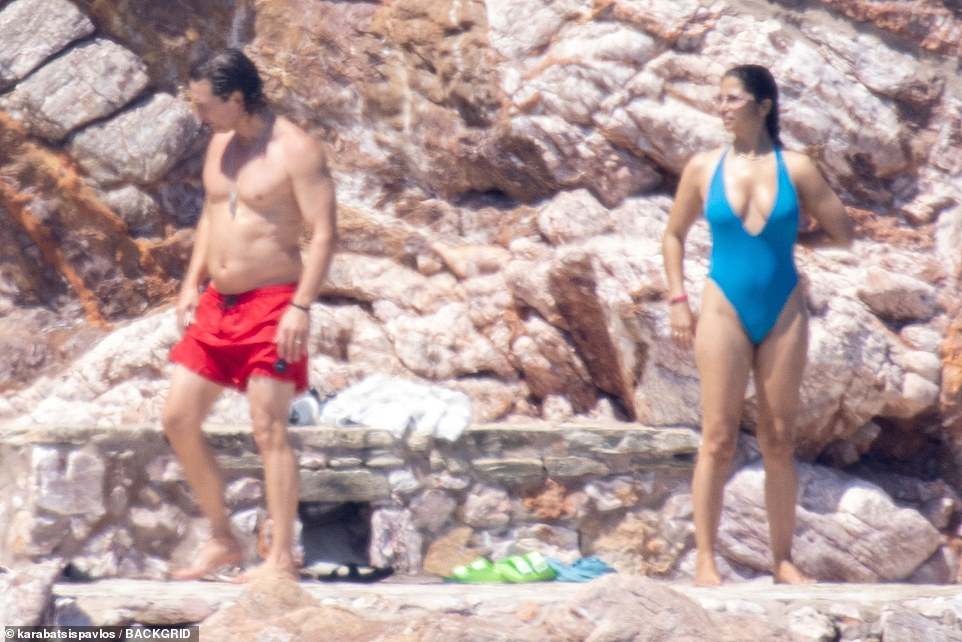 
Matthew McConaughey showed off his movie-star muscles during a family break in Greece…days after calling for gun control measures following a school massacre in his hometown of Uvalde.

The Hollywood star, 52, was seen soaking in the Greek sun in the company of his Brazilian model-turned-designer wife Camila Alves, 40.

McConaughey, who shot to fame in the 1990s as the thinking woman’s hunk, displayed his enviable physique in a pair of red shorts.

Camila donned a royal blue swimsuit and swimming goggles to indulge in some cliff-jumping, with McConaughey at one point snapped adjusting his wife’s bathing suit.

He was seen frolicking with wife Camila atop a peaceful Greek cliff, with the pair also joined by their 12 year-old twins Levi and Vida, as well as their nine year-old son Livingston.

At the podium, McConaughey recalled how he hugged his children extra tighter after finding out about a massacre in his hometown of Uvalde, in which 19 children and two teachers were killed at an Elementary school.

McConaughey and Alves visited Uvalde after the tragedy and the actor spent time with staff at the Uvalde school district. 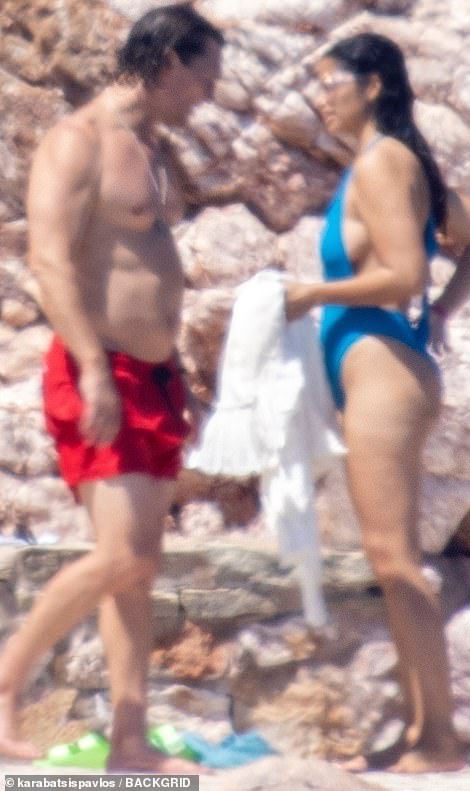 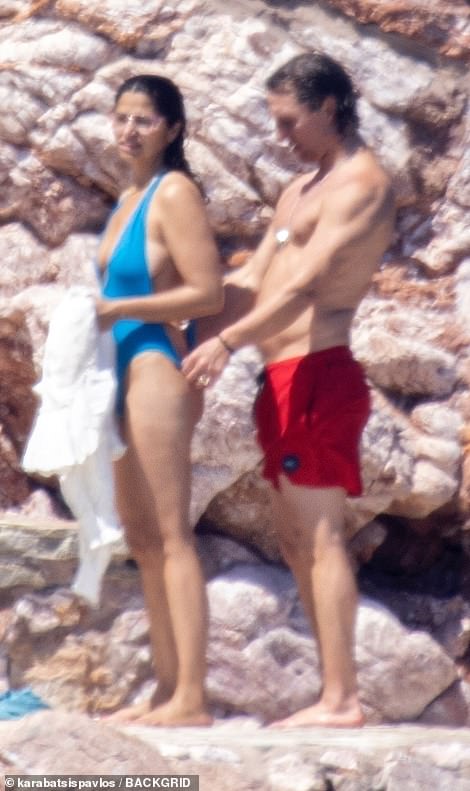 McConaughey, 52, was seen lovingly drying his wife’s back with a towel after a swim on the paradisiac beaches. 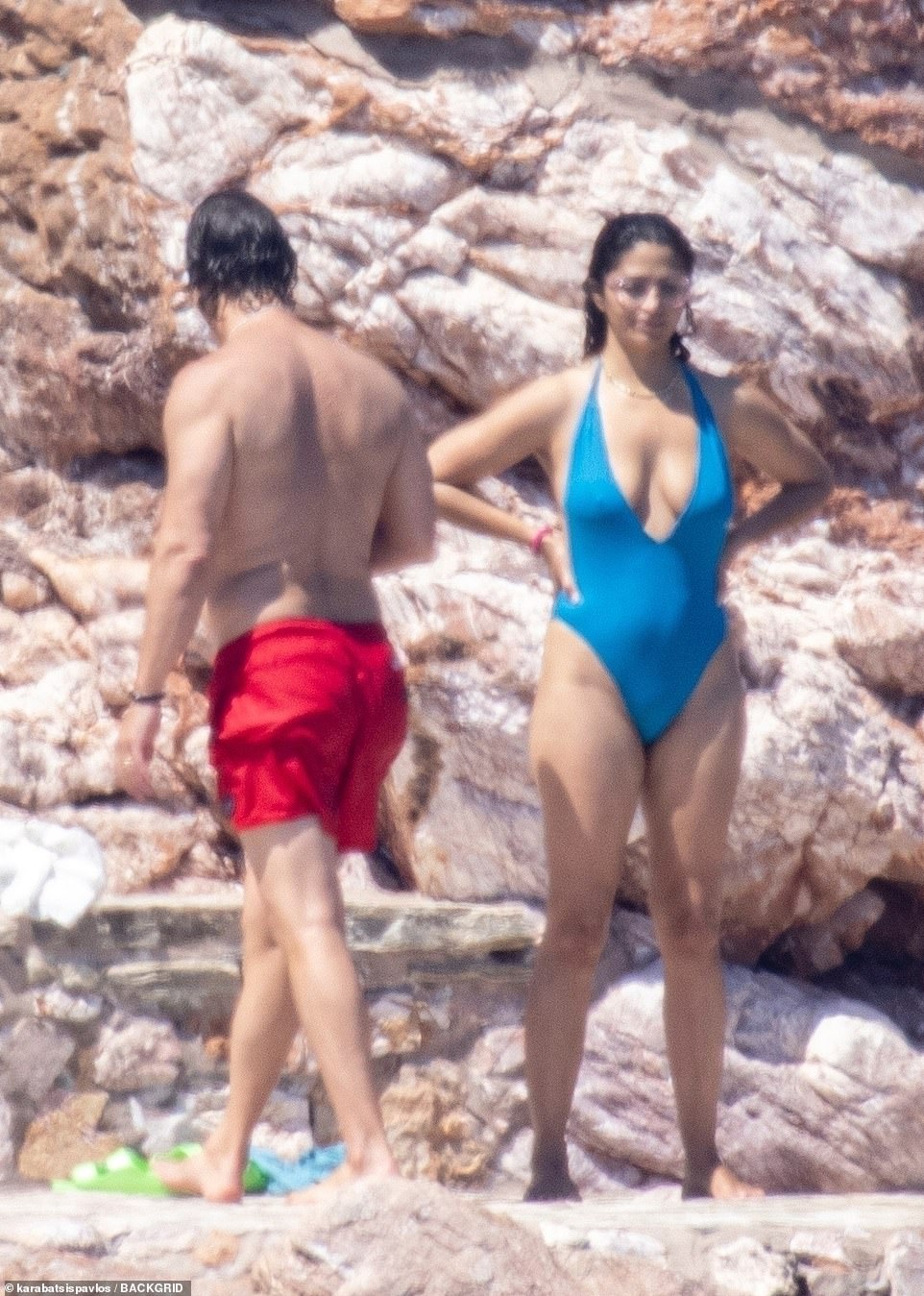 Celebrating a bipartisan Senate framework regarding gun control last week, the Hollywood star was seen soaking in the Greek sun in the company of his Brazilian model-turned-designer wife Camila Alves, 40 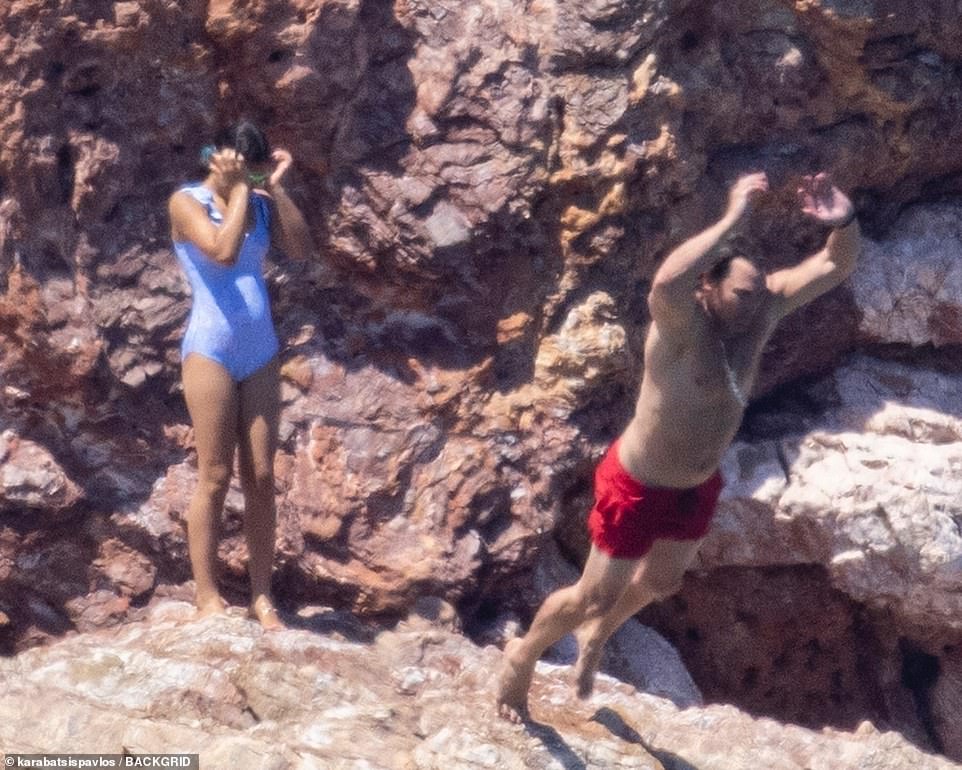 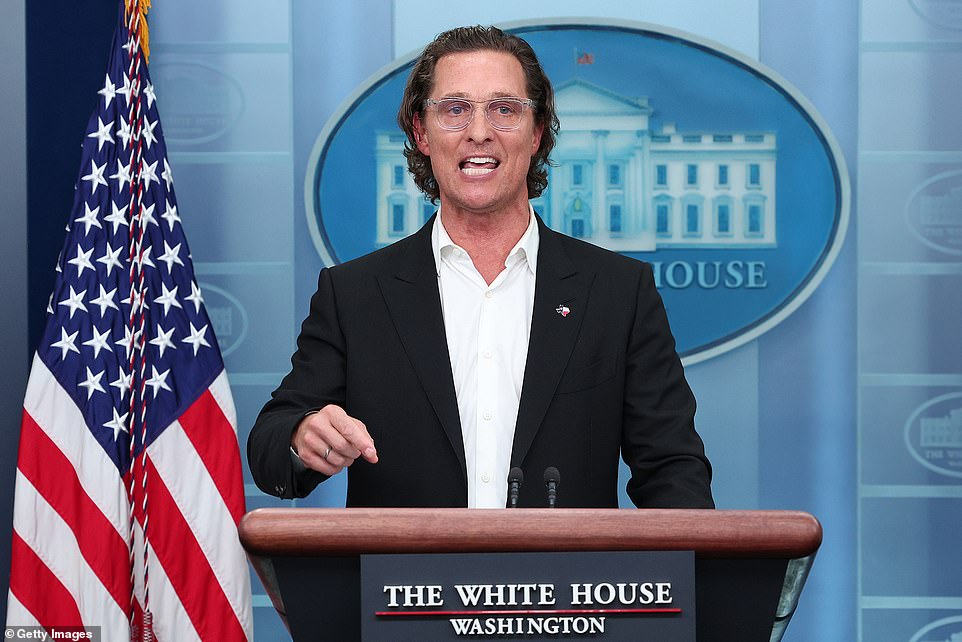 In the aftermath of the shooting at the elementary school in Ulvade, McConaughey called for ‘gun responsibility’ but not ‘control.’ He visited his home town to meet with the families of the victims.

At the beginning of June, McConaughey and Alves launched a Uvalde Relief fund as a part of their Just Keep Livin’ Foundation.

He also spoke about gun reform to Democratic Senator Dick Durbin, who tweeted photos and details from his sit-down with the actor.

In a highly personal 22-minute speech last week, McConaughey asked Congress to pass gun reforms that can save lives without infringing on Second Amendment rights.

McConaughey, a gun owner himself, used his star power to make an argument, offering a clear connection to the small Texas town and vividly detailing the sheer loss of the 19 children and two teachers in the second-worst mass school shooting in US history. 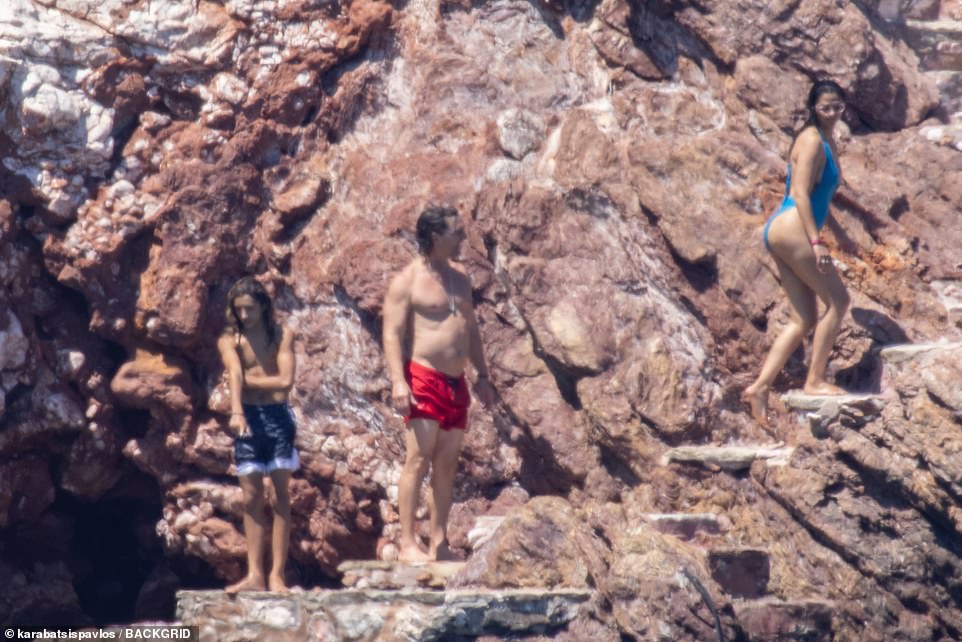 The couple hit the beach along with their three children, 12-year-old twins Levi and Vida, and son Livingston, 9. 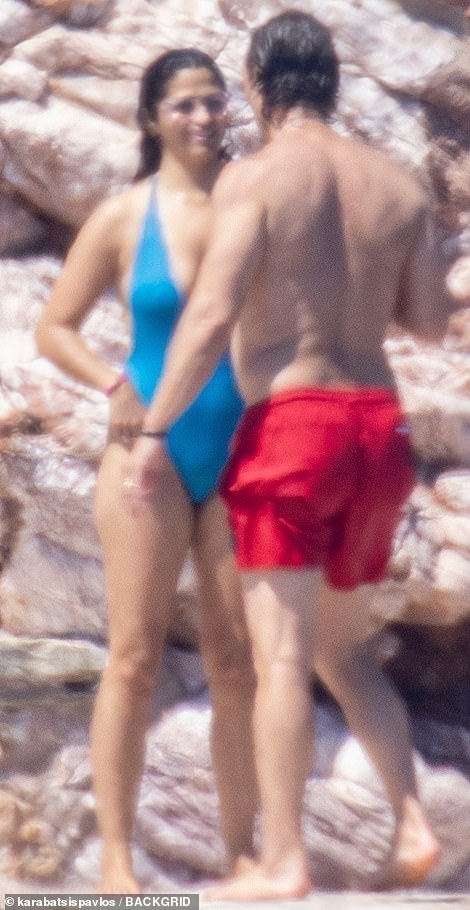 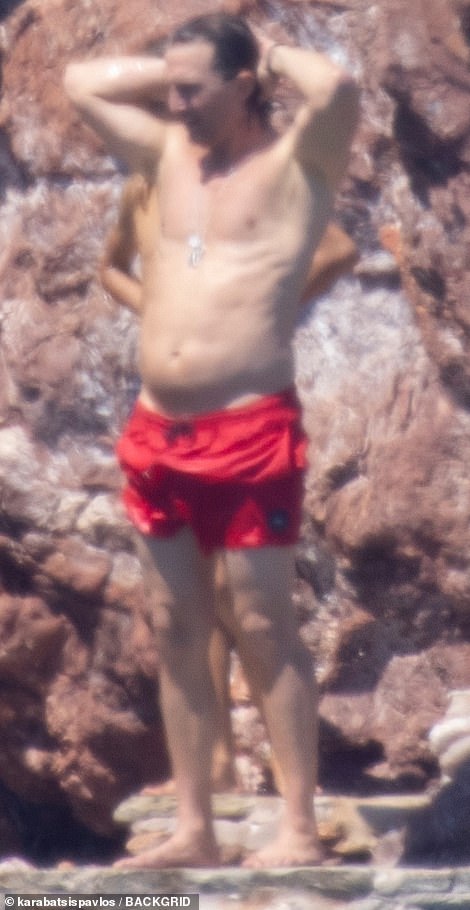 Last week McConaughey recalled how he hugged his children extra tighter after finding out about a massacre in his hometown of Uvalde, in which 19 children and two teachers were killed at an Elementary school 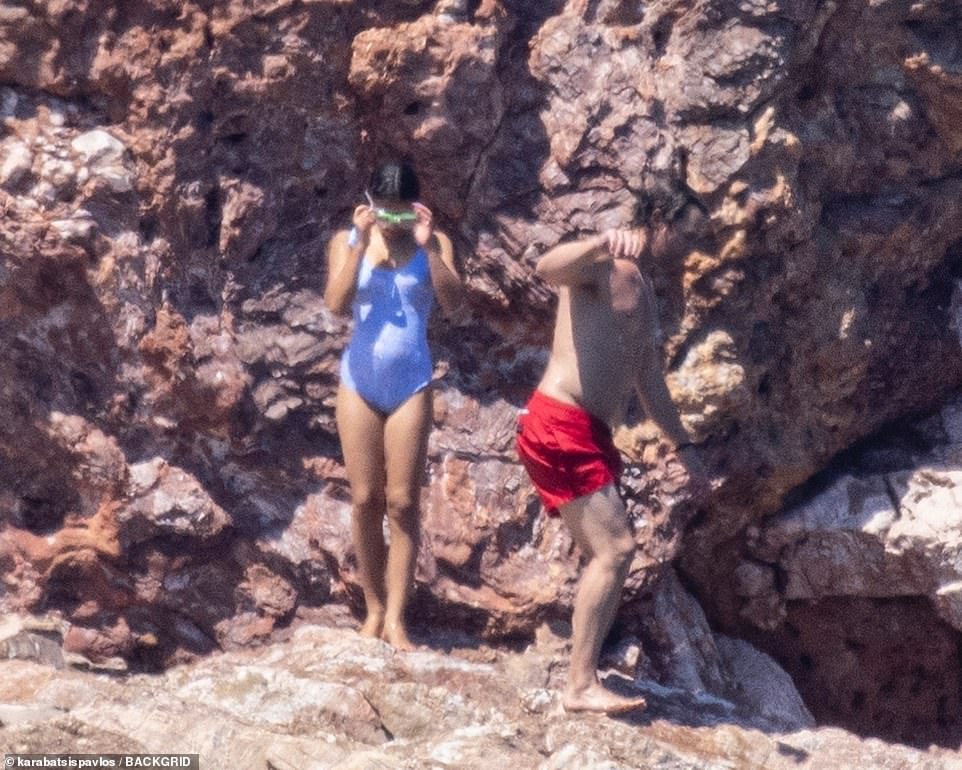 McConaughey was spotted soaking in the Greek sun with his children

McConaughey also penned an op-ed calling for changes in laws to protect children.

‘I am a father, the son of a kindergarten teacher, and an American. I was also born in Uvalde, Texas,’ McConaughey had previously written in a piece published in Austin American Statesman, ‘That’s why I’m writing this.’

‘I believe that responsible, law-abiding Americans have a Second Amendment right, enshrined by our founders, to bear arms.’

‘I also believe we have a cultural obligation to take steps toward slowing down the senseless killing of our children.’

McConaughey’s mother Kay, who turned 90 in January and lived with her son throughout the pandemic, was a teacher at St. Philip’s Episcopal School in Uvalde.

Her school, which McConaughey attended, is only a mile from Robb Elementary, where the tragedy took place.

McConaughey  specifically called on Congress to bolster background checks for gun purchases and raise the minimum age to purchase an AR-15-style rifle to 21 from 18.

‘We want secure and safe schools and we want gun laws that won’t make it so easy for the bad guys to get the damn guns,’ McConaughey said.

McConaughey published this op-ed in the Austin American Statesman on Monday, arguing that ‘gun responsibility’ was the best way to protect the 2nd Amendment 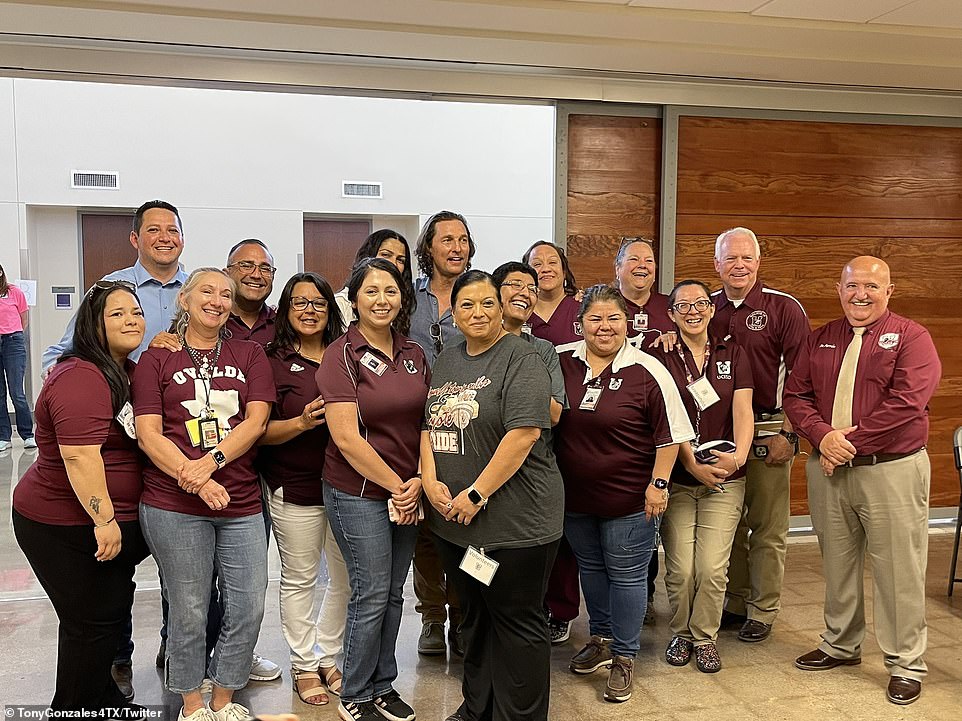 McConaughey visiting Uvalde, Texas, on May 27, days after the mass shooting. He has set up a relief fund to help victims of the shooting 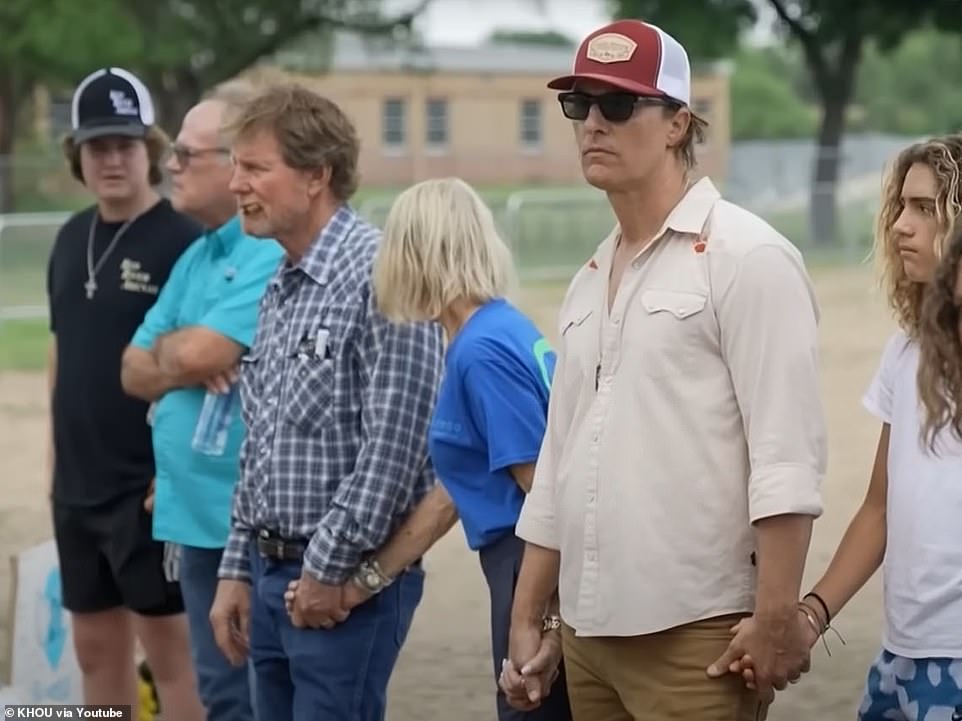 McConaughey, who earlier this year considered a run for governor of Texas before taking a pass, met briefly in private with President Joe Biden before addressing the White House press corps from the James Brady briefing room.

McConaughey and his wife Camila were also spotted having dinner wth Manchin and his fellow Senators Amy Klobuchar, Democrat of Minnesota, and Rob Portman, Republican of Ohio, at the fancy Italian restaurant Fiola Mare.

‘For the first time in 30 years, ”something” has happened. The Senate has agreed on a bipartisan framework of policies that can enhance gun responsibility in America and save lives,’ McConaughey shared on Instagram.

”’Something” has been done in the effort to stop some of the deranged individuals that, with every horrific act, abuse and hijack the second amendment.’

McConaughey went on to thank the bipartisan committee of senators who drafted the framework, which he said could potentially save the lives of innocent people. 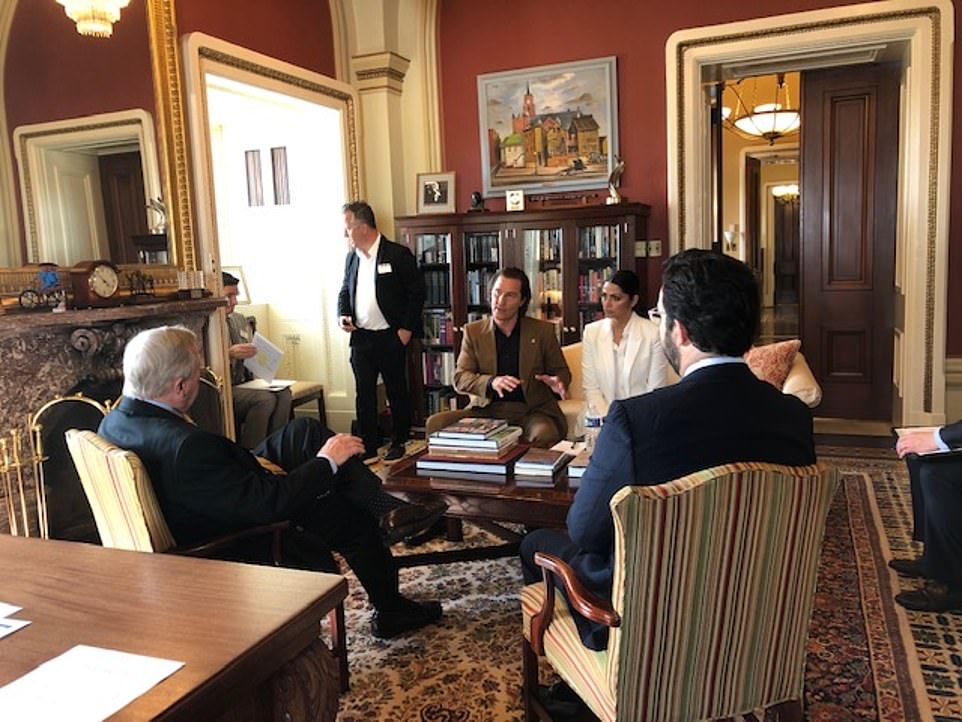 Matthew McConaughey, a native of Uvalde, Texas, who has advocated for gun reform, was on Capitol Hill Monday to lobby lawmakers 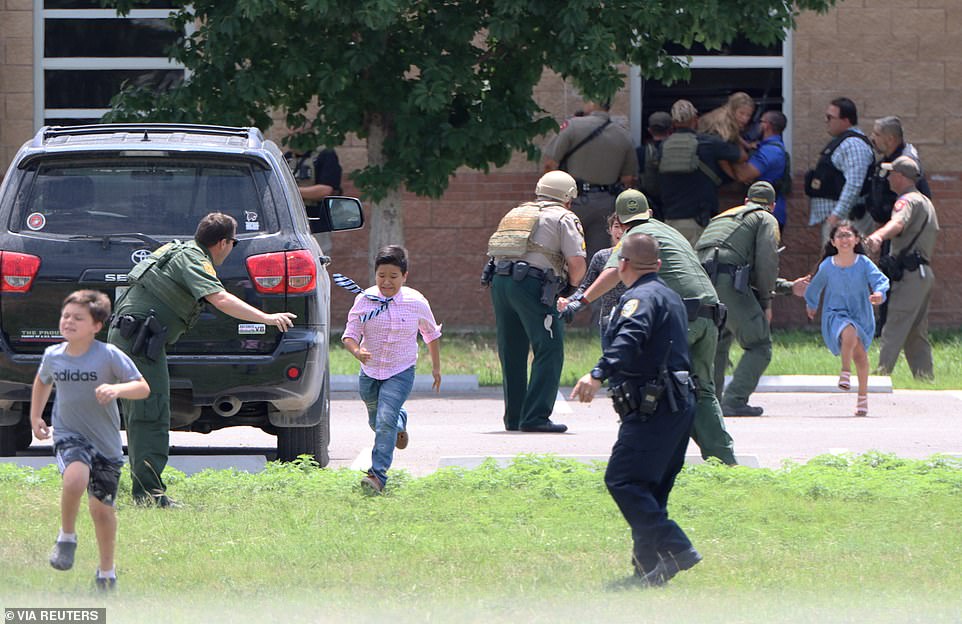 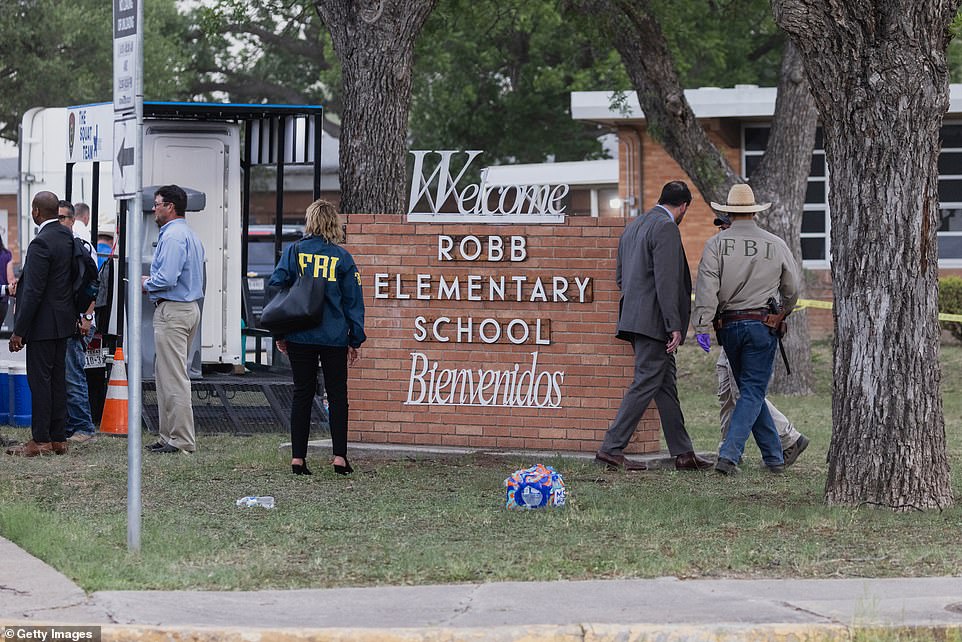 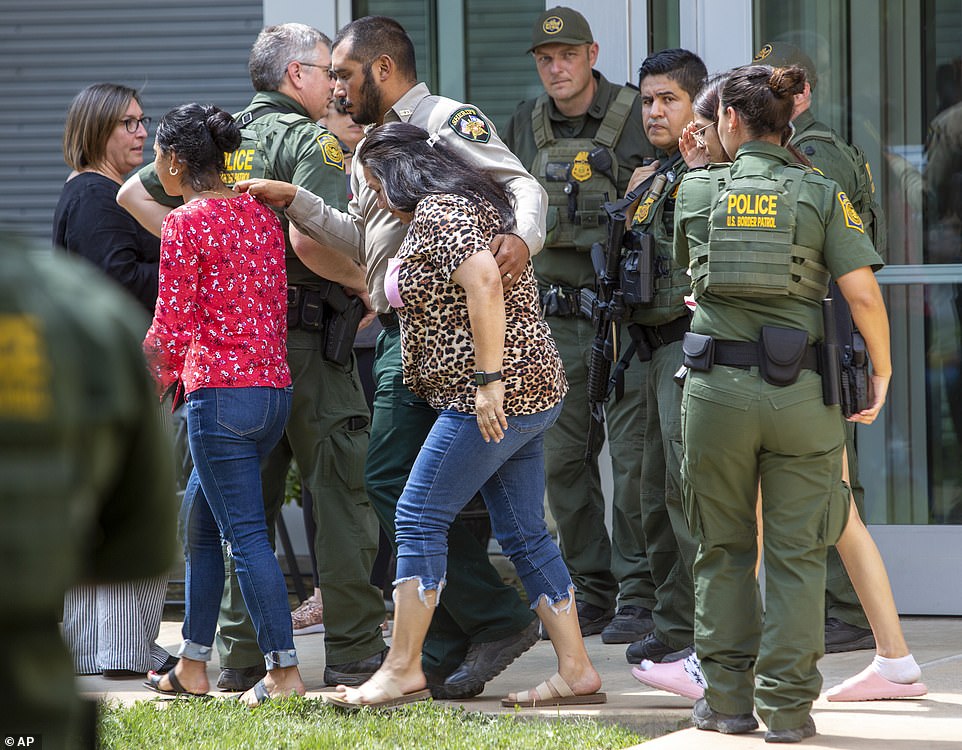 People leave the Uvalde Civic Center following a shooting earlier in the day at Robb Elementary School, Tuesday, May 24 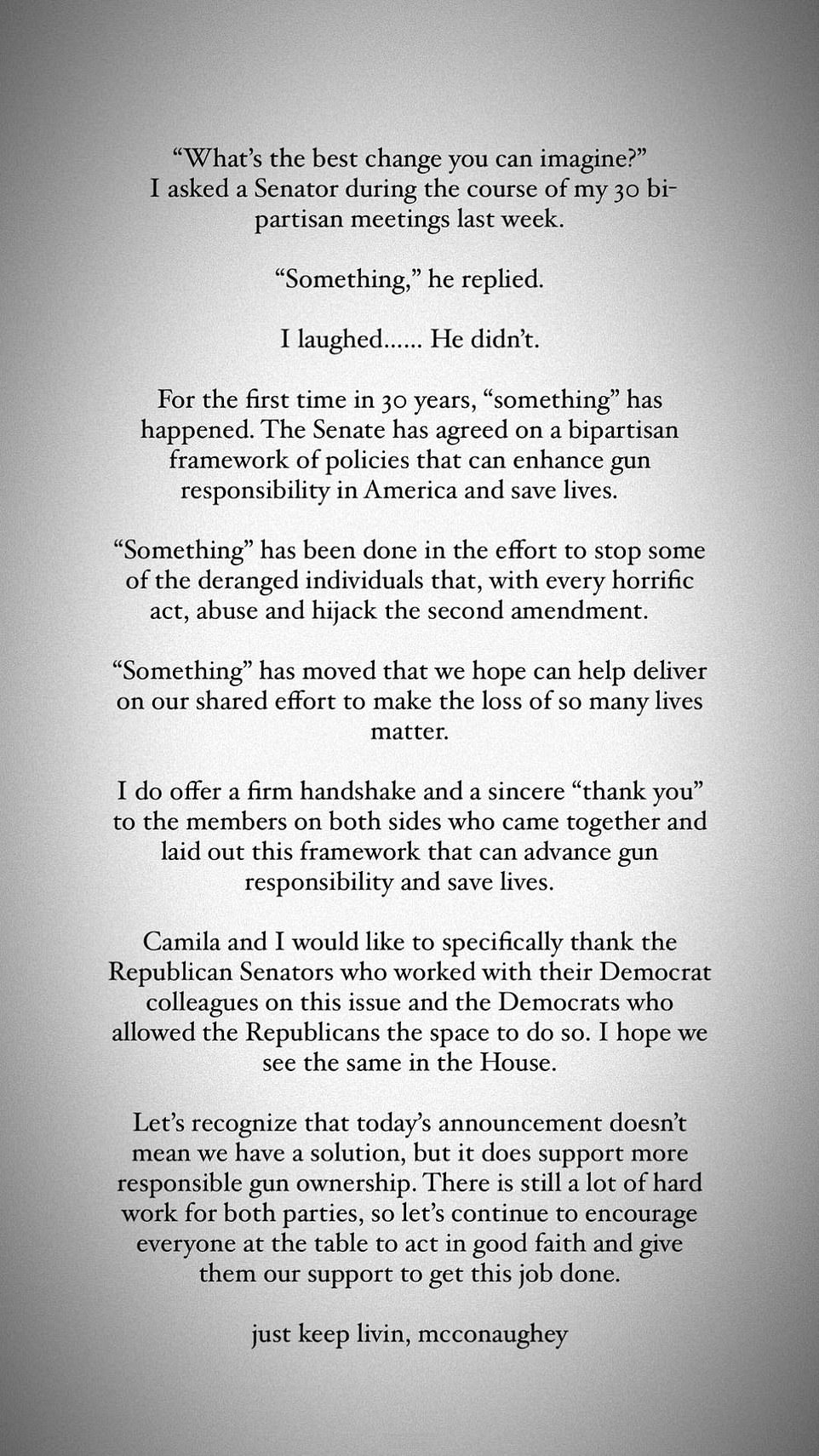 McConaughey went on to thank the bipartisan committee of senators who drafted the framework, which he said could potentially save innocent lives

The actor said he was hopeful that the joint effort would reverberate in the House of Representatives.

‘There is still a lot of hard work for both parties, so let’s continue to encourage everyone at the table to act in good faith and give them our support to get this job done.’

Biden said in a statement that the framework ‘does not do everything that I think is needed, but it reflects important steps in the right direction, and would be the most significant gun safety legislation to pass Congress in decades.’ 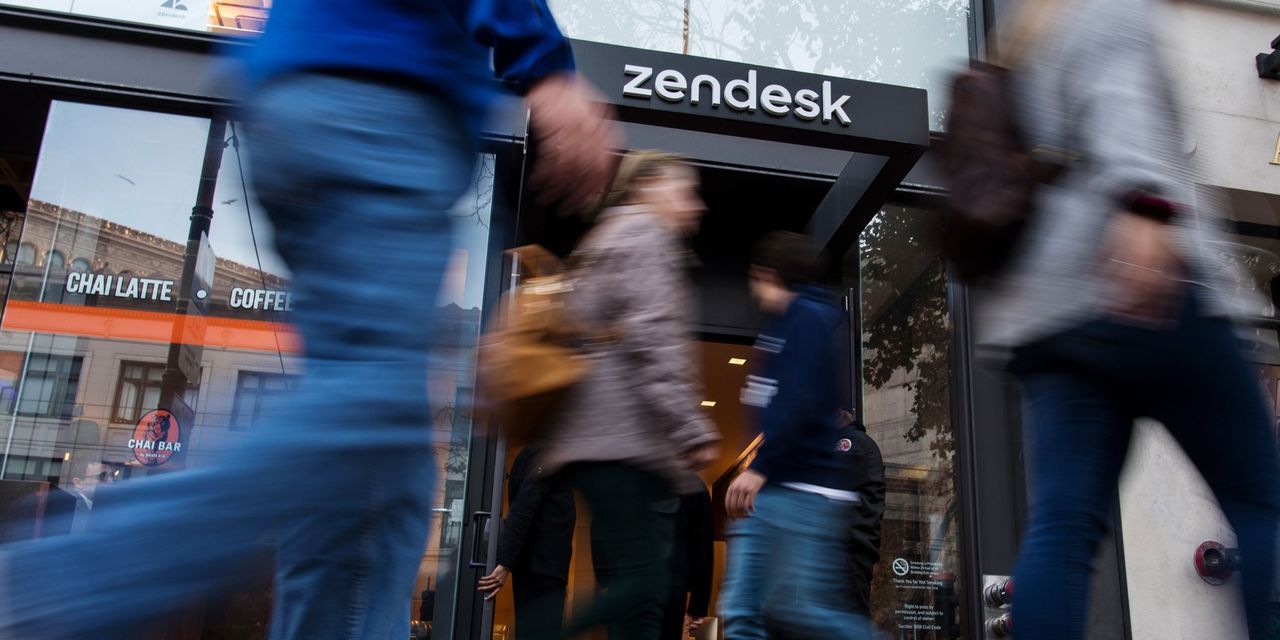 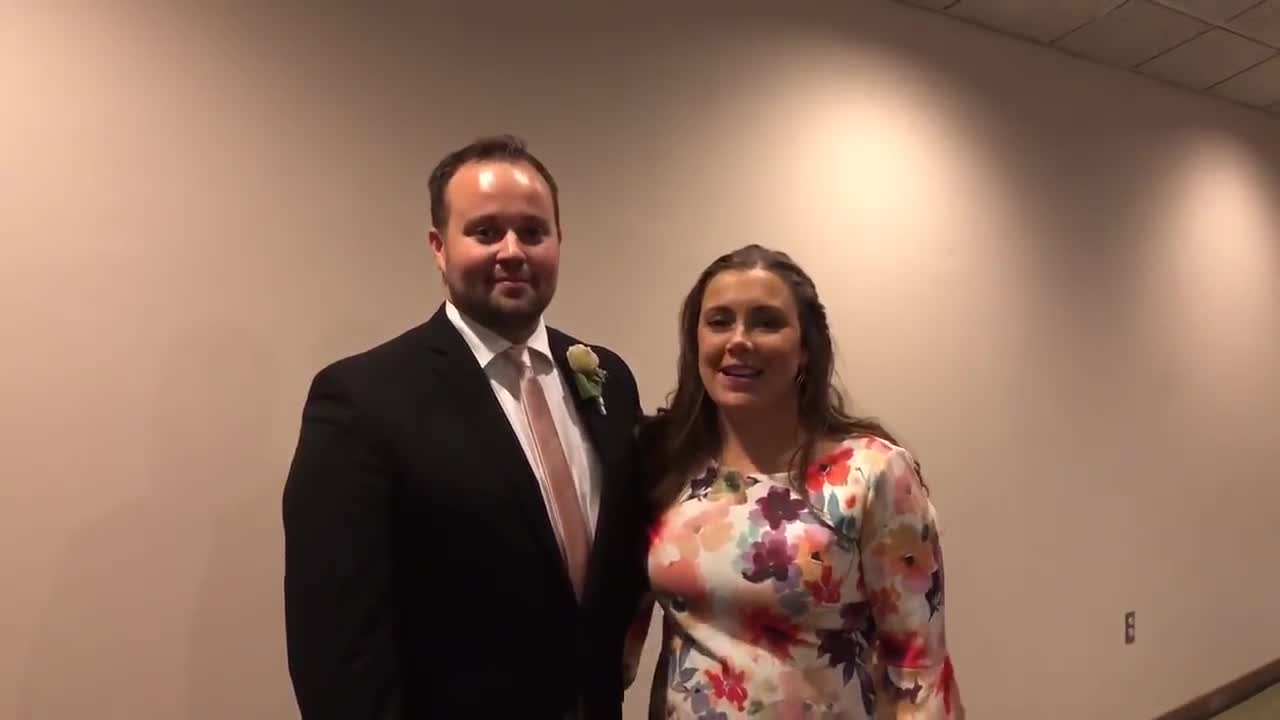 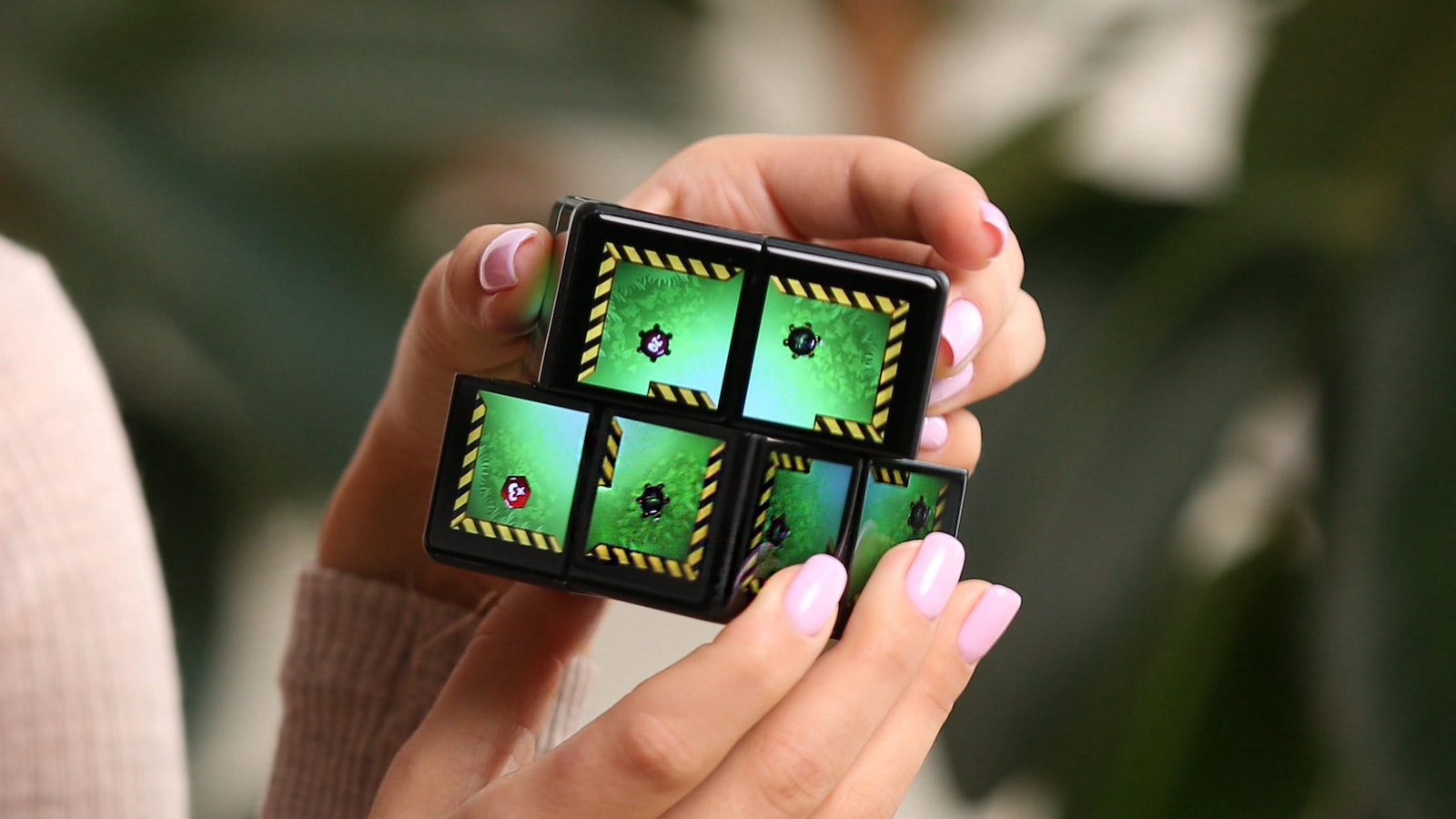