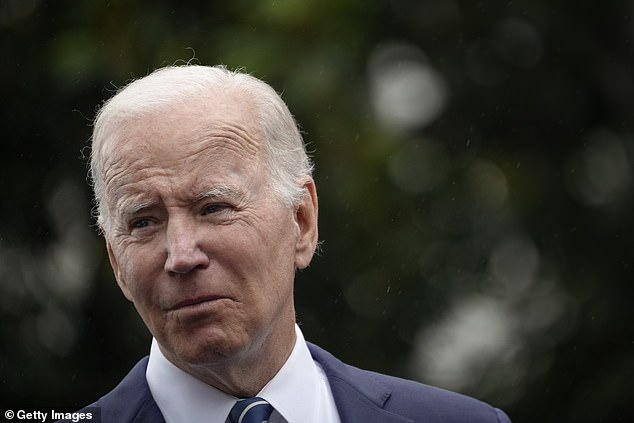 
The Supreme Court has struck down a New York law that severely restricted licenses to carry a concealed weapon, in the high court’s biggest Second Amendment ruling in more than a decade.

President Joe Biden said he was ‘deeply disappointed’ in the ruling, saying in a statement that it ‘contradicts both common sense and the Constitution, and should deeply trouble us all.’

The 6-3 ruling on Thursday reversed a lower court’s opinion, which had upheld the 108-year-old New York law restricting licenses to carry concealed weapons in public only to those demonstrating ‘proper cause’.

New York is not alone in severely limiting who can get a license to carry concealed in public, and the new ruling will likely make it easier to legally carry a gun in major cities including Los Angeles, Boston and Baltimore.

The court decision comes as the Senate was poised on Thursday for a vote to advance a bipartisan gun-control bill, in what could be the first new federal gun legislation in decades. 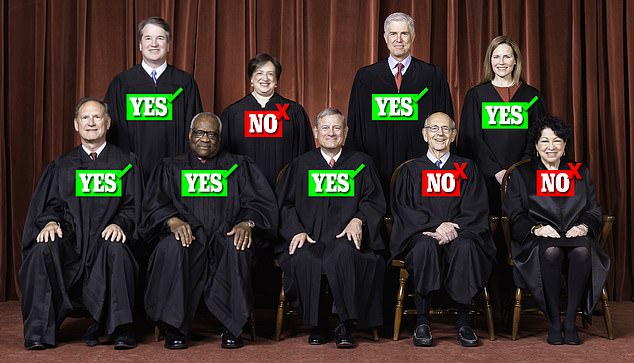 The 6-3 ruling on Thursday came along ideological lines, with the court’s conservative majority all voting in favor of striking down the New York law 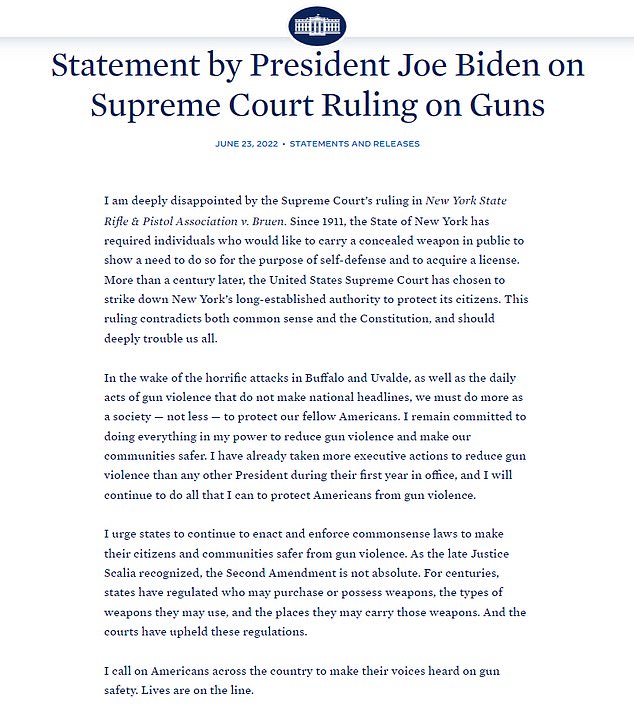 New York City Mayor Eric Adams — who himself has a concealed carry permit and was elected on a platform of cracking down on crime — said that the ruling ‘will put New Yorkers at further risk of gun violence.’

‘We have been preparing for this decision and will continue to do everything possible to work with our federal, state, and local partners to protect our city,’ Adams wrote in a tweet.

‘Today’s Supreme Court decision may have opened an additional river that is going to feed the sea of gun violence in our city and in our nation,’ Adams added at a press conference.

Adams insisted that despite the ruling, ‘nothing changes today’ and that the city would be reviewing its procedures to ensure that only those who are ‘fully qualified’ can obtain a concealed carry permit.

‘We cannot allow New York to become the wild, wild West. That is unacceptable,’ said Adams.

Adams said the city has and will continue efforts to mitigate risks of gun violence in the city, including reviews of defining license application processes and ‘sensitive locations’ where guns are banned. 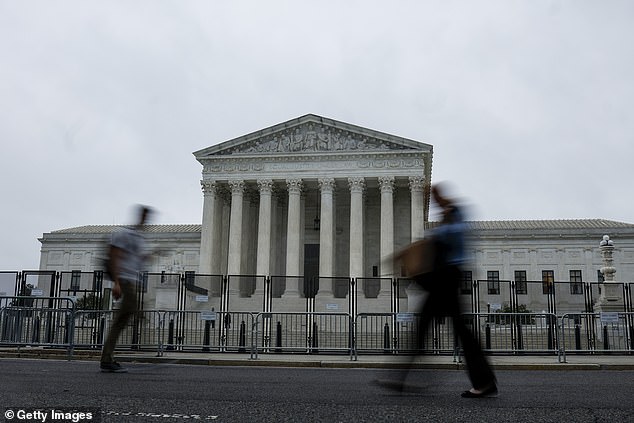 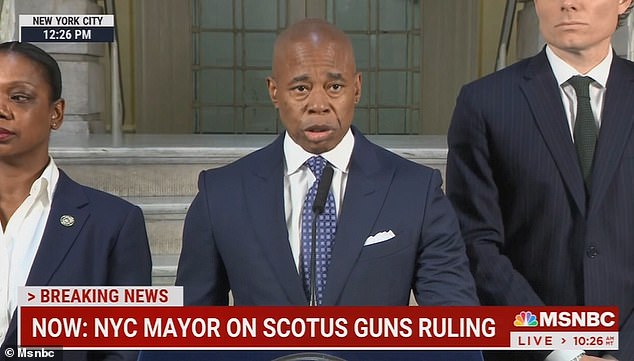 New York Governor Kathy Hochul, a Democrat, reacted with fury to the court ruling, saying that it flew in the face of efforts to restrict gun rights following several high-profile mass shootings.

‘It is outrageous that at a moment of national reckoning on gun violence, the Supreme Court has recklessly struck down a New York law that limits those who can carry concealed weapons,’ Hochul wrote in a tweet.

‘In response to this ruling, we are closely reviewing our options – including calling a special session of the legislature,’ the governor added.

Hochul said the decision marked a ‘dark day’ and told reporters: ‘Shocking, absolutely shocking, that they have taken away our rights to have reasonable restrictions.’

‘We can have restrictions on speech — you can’t yell fire in a crowded theater but somehow there’s no restrictions allowed on the Second Amendment,’ she said.

Manhattan District Attorney Alvin Bragg also slammed the ruling, saying in a statement: ‘This decision severely undermines public safety not just in New York City, but around the country.’

Bragg said that his office was analyzing the ruling and would work to craft new legislation within the bounds of the court’s decision.

‘The Supreme Court may have made our work harder, but we will only redouble our efforts to develop new solutions to end the epidemic of gun violence and ensure lasting public safety,’ he said.

‘We will continue to do everything in our power to protect New Yorkers from gun violence and preserve our state’s common sense gun laws,’ she tweeted. 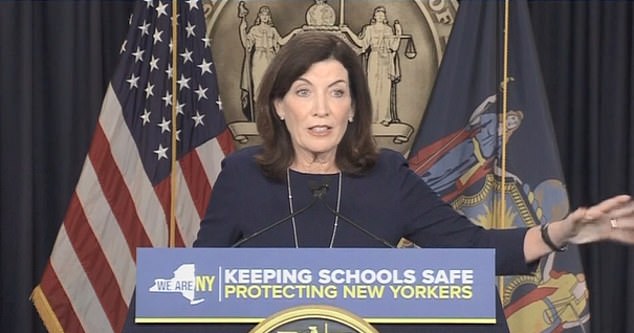 New York Governor Kathy Hochul, a Democrat, reacted with fury to the court ruling and said she would consider calling a special session of the legislature to respond 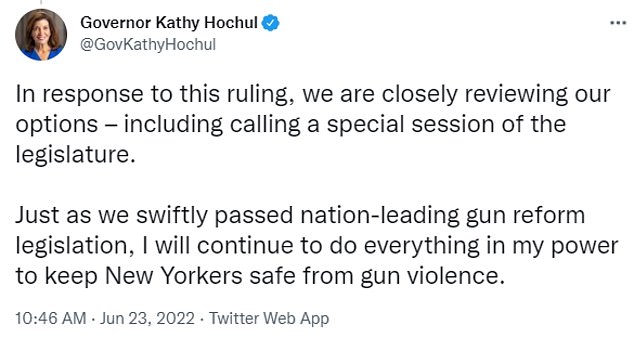 Biden in a lengthy statement also expressed dismay at the ruling, saying that ‘lives are on the line.’

‘In the wake of the horrific attacks in Buffalo and Uvalde, as well as the daily acts of gun violence that do not make national headlines, we must do more as a society — not less — to protect our fellow Americans,’ said Biden.

‘The Supreme Court’s decision today defies logic in terms of what we know we are capable of doing with reasonable gun safety laws to secure the safety and the well being of the people of our nation,’ she said.

In contrast, gun rights advocates reacted to the ruling enthusiastically, saying that it bolstered the constitutional right to bear arms.

‘Today’s ruling is a watershed win for good men and women all across America and is the result of a decades-long fight the NRA has led,’ said National Rifle Association executive vice president Wayne LaPierre.

‘The right to self-defense and to defend your family and loved ones should not end at your home,’ he added.

Rep. Lauren Boebert, a Colorado Republican and staunch advocate in favor of gun rights, also praised the ruling in a tweet saying that New York’s law had been ‘unconstitutional.’

The new ruling will have far-reaching implications in a number of states with similar laws.

Thursday’s court ruling is expected to ultimately allow more people to legally carry guns on the streets of the nation´s largest cities – including New York, Los Angeles and Boston – and elsewhere.

Court ruling will make it easier to legally carry a gun in major cities including LA, Boston and Baltimore

The new ruling will have far-reaching implications in a number of states with similar laws.

Thursday’s court ruling is expected to ultimately allow more people to legally carry guns on the streets of the nation’s largest cities – including Baltimore, Los Angeles and Boston – and elsewhere.

About a quarter of the U.S. population lives in states expected to be affected by the ruling, the high court’s first major gun decision in more than a decade.

About a quarter of the U.S. population lives in states expected to be affected by the ruling, the high court´s first major gun decision in more than a decade.

Maryland Attorney General Brian Frosh, a Democrat, said his office will examine Thursday´s ruling to determine its impact on Maryland and ‘continue to fight to protect the safety of Marylanders.

In the statement, Frosh contends people carrying firearms in public places is a dangerous thing to have become the norm.

‘The epidemic of gun violence sweeping our nation demonstrates daily the folly of introducing more guns into this boiling cauldron,’ he said.

Justice Thomas wrote for the majority that the Constitution protects ‘an individual´s right to carry a handgun for self-defense outside the home.’

In their decision, the justices struck down a New York law requiring people to demonstrate a particular need for carrying a gun in order to get a license to carry one in public.

The justices said the requirement violates the Second Amendment right to ‘keep and bear arms.’

In a dissent joined by his liberal colleagues, Justice Stephen Breyer focused on the toll taken by gun violence. ‘Since the start of this year alone (2022), there have already been 277 reported mass shootings-an average of more than one per day,’ Breyer wrote.

Backers of New York’s law had argued that striking it down would ultimately lead to more guns on the streets and higher rates of violent crime.

The decision comes at a time when gun violence already on the rise during the coronavirus pandemic has spiked anew.

In most of the country, gun owners have little difficulty legally carrying their weapons in public.

But that had been harder to do in New York and the handful of states with similar laws. 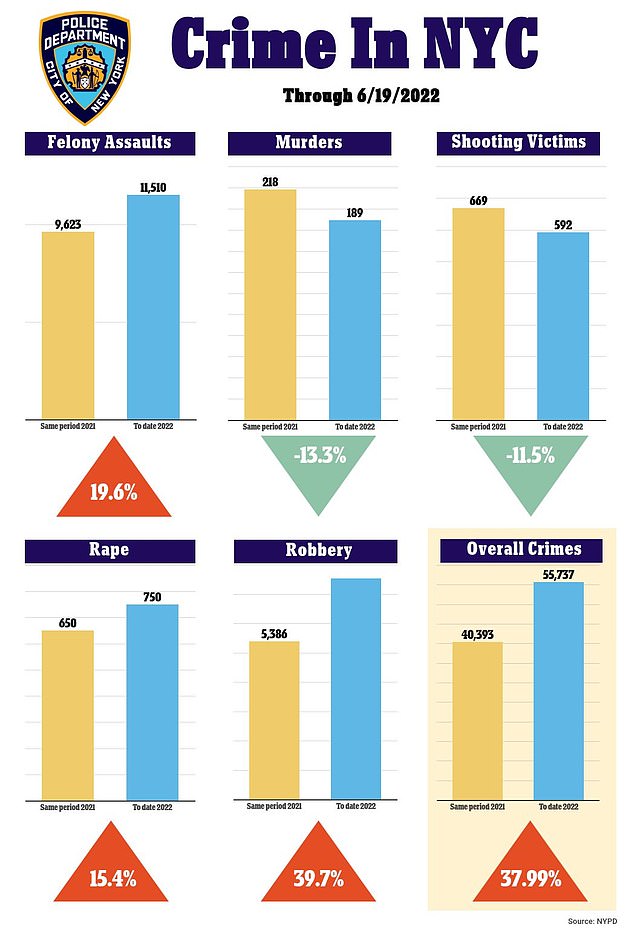 New York’s law, which has been in place since 1913, says that to carry a concealed handgun in public, a person applying for a license has to show ‘proper cause,’ a specific need to carry the weapon.

In effect, the rules made it nearly impossible to obtain a concealed carry license in New York City, where the permits are issued mainly to retired cops, business owners who handle large amounts of cash, and celebrities who face death threats.

The list of concealed carry license holders in New York City is not public, but an analysis by the New York Times in 2011 found that about 4,000 people in the city had permits.

Donald Trump famously revealed in 2012 that he was one of the city’s permit holders, saying he owned two semi-automatic pistols.

Mayor Eric Adams, who qualifies for a permit both as a former police officer and a public figure, also revealed on the campaign trail that he planned to carry a concealed gun in public after taking office.

The Supreme Court last issued a major gun decision in 2010. In that decision and a ruling from 2008 the justices established a nationwide right to keep a gun at home for self-defense.

The question for the court this time was about carrying one outside the home. The case was New York State Rifle & Pistol Association v. Bruen. 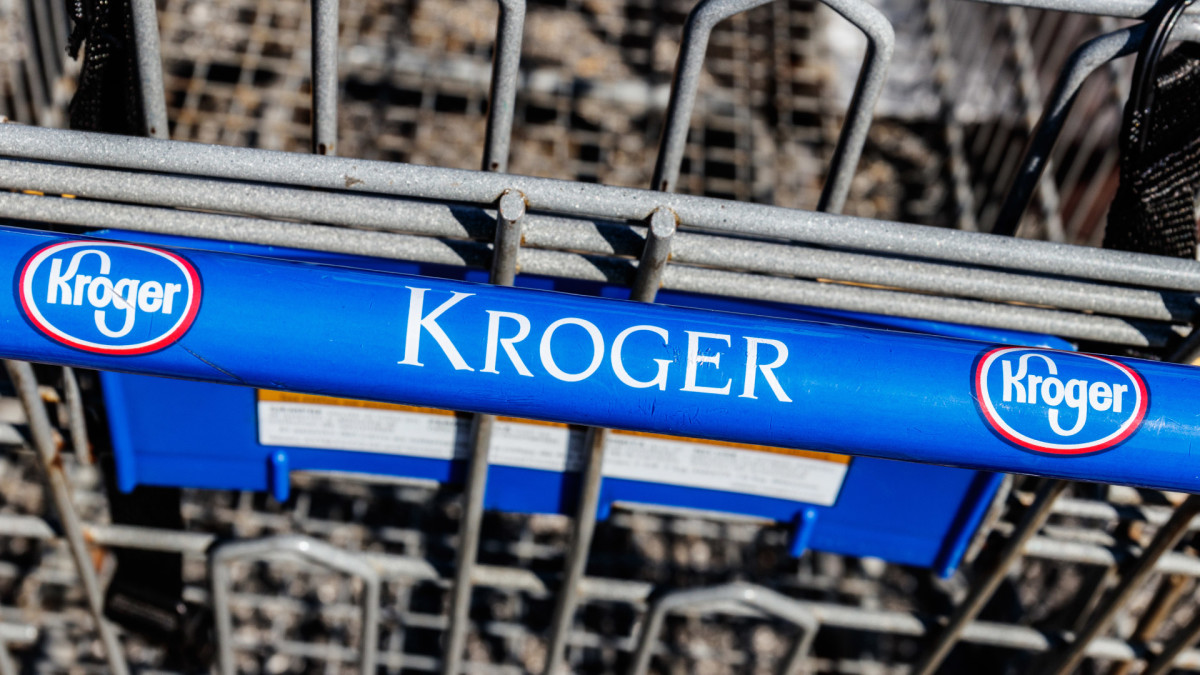 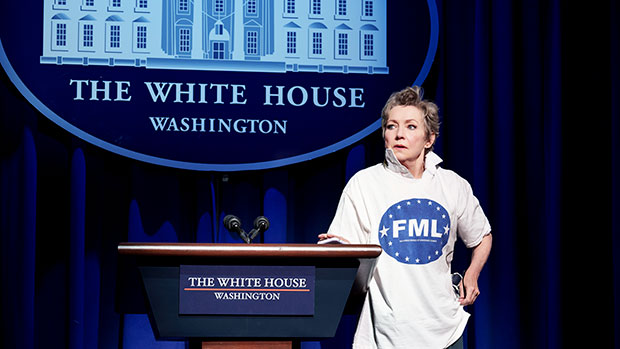 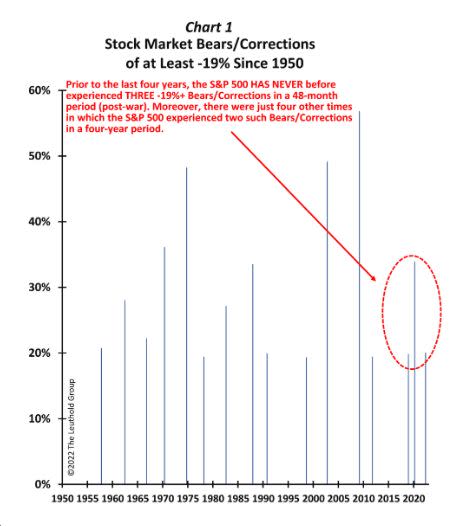