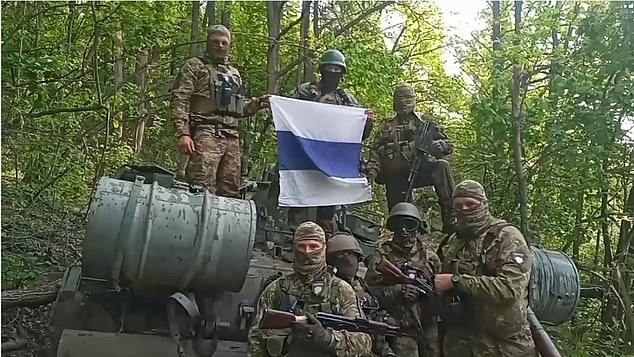 
Like all his Ukrainian army comrades, Volodymyr Grotskov is fuelled by deeply-held patriotism as he risks his life on the bloodstained frontline of the brutal war against Russia.

The 48-year-old electrical engineer says he loves his country and sees the Kremlin as a destructive ‘cancer’ threatening the world’s peace and security. ‘It might sound pretentious but I’m fighting for freedom and democracy,’ he insists.

Yet there is one big difference between Grotskov and all the other soldiers in his brigade who are sitting beside us, eating borscht and cleaning their guns while the thunder of artillery bombardment crashes around the battered Donbas frontline.

For this member of the Ukrainian military is Russian – and he is fighting to liberate his country from dictatorship as well as the preservation of his adopted nation.

‘So what would happen if you were caught?’ I asked this quietly-spoken soldier as we talked in his unit’s temporary farmhouse base. ‘Death would happen,’ he replied with a laugh, admitting that many compatriots would see him as a traitor.

Yet he is among scores of Russians so infuriated by Vladimir Putin’s barbarity and corruption that they have defected to Kyiv’s side – including captured prisoners of war and even a senior official in one of Moscow’s central financial institutions.

‘Guys from Russia – if you hate Putin’s regime and want Russia to become a free, democratic country, join us,’ declared Igor Volobuev, the former vice-president of Gazprombank, last week.

Certainly Grotskov subscribes to such views. When we met close to some of the fiercest fighting in the deadly battlegrounds south of Izyum, he told me about the personal journey that led him to take up arms against his nation’s forces. 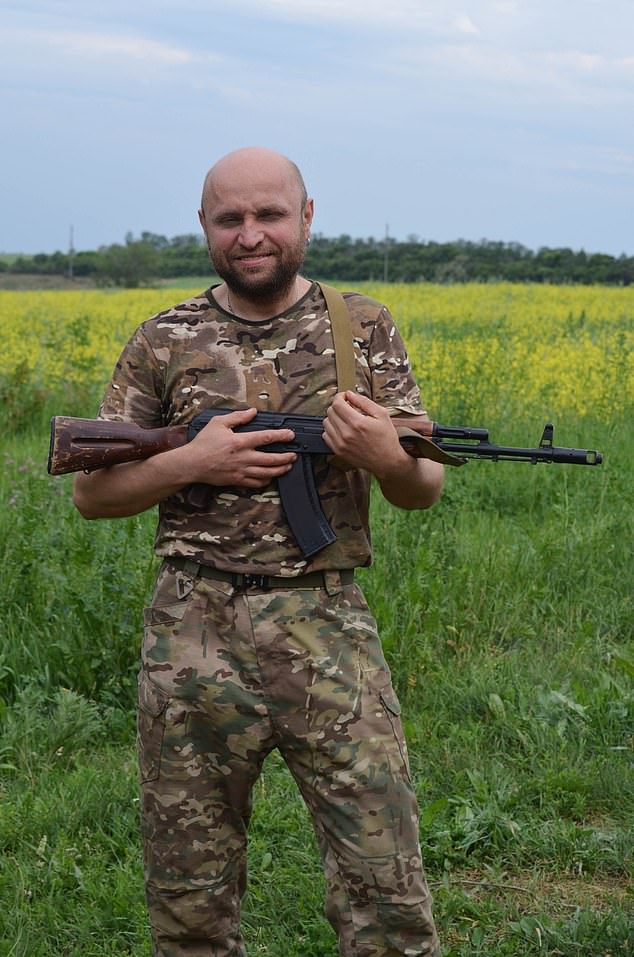 Volodymyr Grotskov, 48, says he loves his country and sees the Kremlin as a destructive ‘cancer’ threatening the world’s peace and security. ‘It might sound pretentious but I’m fighting for freedom and democracy,’ he insists.

His awakening began 11 years ago when pro-democracy protests erupted across Russia following ballot-rigging and fraud to fix the success of Putin’s party in parliamentary elections.

Grotskov joined small demonstrations in his home town of Kandalaksha after discovering a video posted by Alexei Navalny – the anti-corruption campaigner who has since survived a poisoning attack and been jailed.

The video, based on documents obtained by Navalny, exposed how billions of pounds were stolen from an oil pipeline project by one of Putin’s closest cronies.

Grotskov said: ‘I was shocked by the scale of corruption and injustice that was organised at the highest level. I started to look into the political and economic situation and realised that we need to fight this regime.’.

The soldier, whose family remain in Russia, began putting up posters and joining protests. But after Putin illegally seized Crimea from Ukraine in 2014, he decided it was immoral to pay taxes to fund a thieving and toxic dictatorship. ‘I’ve always been the kind of person who wants to fight for justice,’ he said. ‘I left for Ukraine because I knew the hottest spot of fighting Putin’s imperial regime is here in this country.’ Initially he intended to set up an online project with friends inside Russia to spread information about corrupt state officials, expose the government’s failure to prosecute them and encourage the imposition of stricter Western sanctions.

He explained: ‘They have fun, spend the money, have businesses abroad. I wanted to make sure that they would not be allowed into the West. The brainwashing has been going on for decades.’

But after Putin stirred up a separatist insurgency in Donbas and war broke out later in 2014, Grotskov joined the Ukrainian volunteer forces despite living illegally in the country – and ended up fighting in one of the most vicious battles near Donetsk. He is infuriated by the complicity of his fellow Russians. He said: ‘Many people get the same information I had but they ignore it. When the war started I realised that 99 per cent of people are happy to see Ukrainians suffering, to see them bombed and killed.’

Grotskov who was granted the right to remain in Ukraine last autumn, said he is proud to fight for Kyiv having joined up again four months ago, adding: ‘I feel like it’s my home. My friends are here, I love this country and I will fight for it.’ But he also believes he is fighting to protect ‘the whole civilised world’ and to defeat dictatorship.

He wants to see Moscow’s empire crushed since he argues that Russia’s problem goes far beyond the current president.

He added: ‘I’m not personally against Putin because if it’s not Putin there will be someone else. Russia, the way it is today, should not exist.

It is a cancer on the world’s body. Take any military conflict around the world – such as Syria or in African countries – and you can always find the Kremlin’s hand.’

It is not known how many other Russians are fighting like this brave man alongside Ukrainian troops, risking execution or a show trial if captured. Clearly such people have great propaganda value – although I came across Grotskov by chance.

He is fighting for a regular army unit in the savage struggle to control Donbas which was described recently as ‘hell’ by Ukraine President Volodymyr Zelensky. 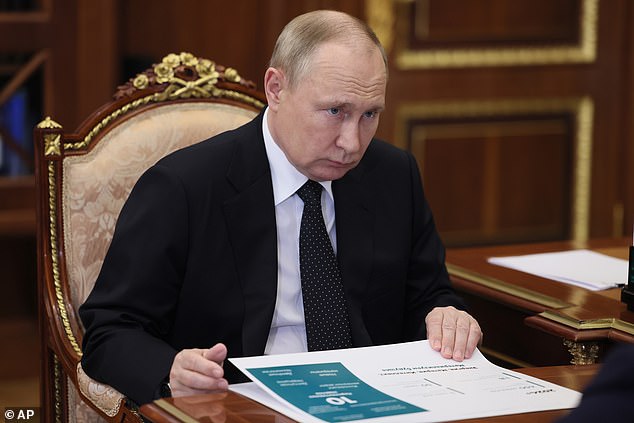 Grotskov said: ‘I’m not personally against Putin (pictured) because if it’s not Putin there will be someone else. Russia, the way it is today, should not exist. It is a cancer on the world’s body. Take any military conflict around the world – such as Syria or in African countries – and you can always find the Kremlin’s hand’

One aide admitted they are losing up to 200 troops a day under the Russian attack. But there is also a Freedom of Russia Legion formed by anti-Putin dissidents in the armed forces, which the Ukrainian defence ministry declared in April had been set up with more than 100 recruits.

One presidential adviser said it was formed after Russian captives, disgusted by atrocities in places such as Bucha and Irpin, pleaded to be allowed to take revenge on Putin.

It fights under the white-and-blue flag used by anti-war protesters, which switches the red band of Russia’s flag to white, and carries the slogan ‘For Russia, For Freedom’ – a subversive play on Putin’s claim that his forces battle ‘For Russia, For Victory’.

Earlier this month, the legion’s social media channel showed some jubilant soldiers displaying their flag alongside a captured Russian tank. ‘Now it will serve for the benefit of the liberation of Russia from Putinism,’ they proclaimed.

Their latest recruit is Ukraine-born Volobuev, who said he could no longer ‘stay on the sidelines watching Russia ravaging my motherland’. 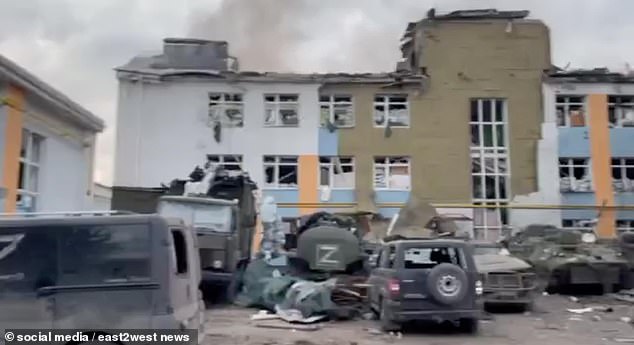 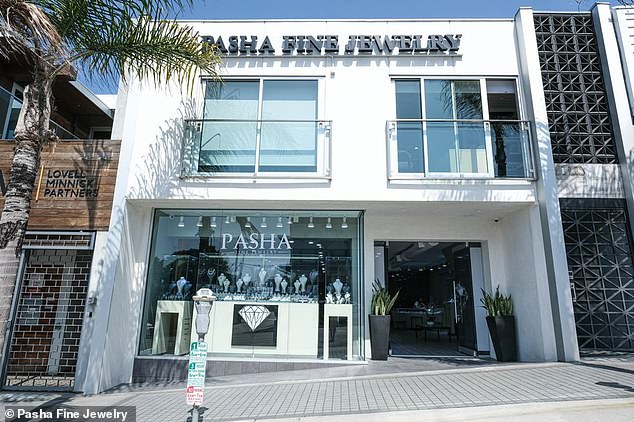 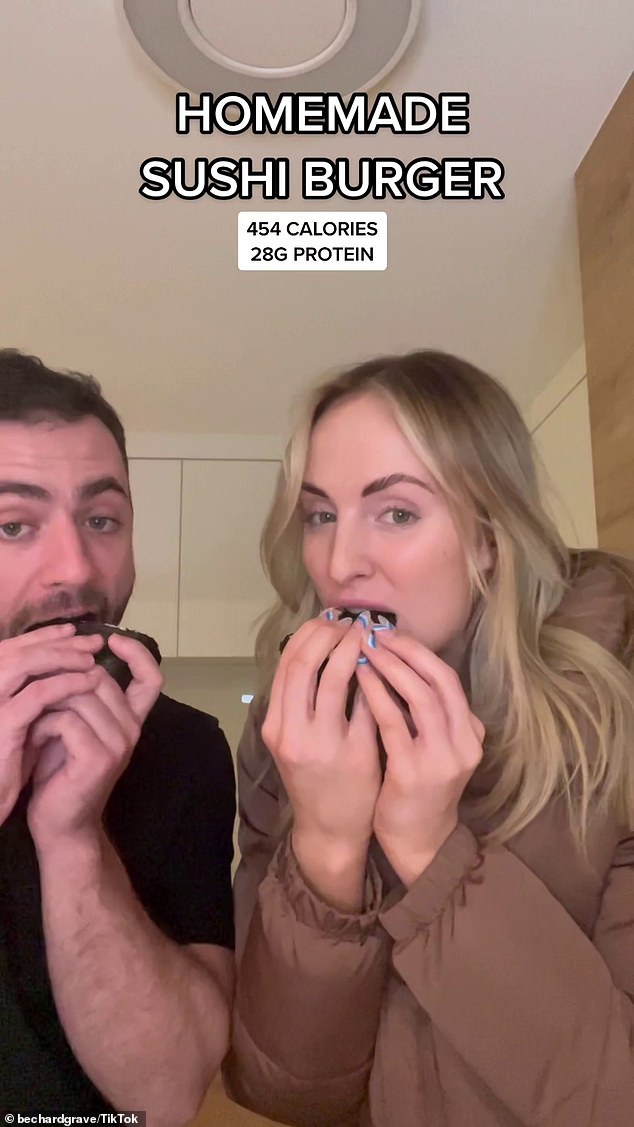