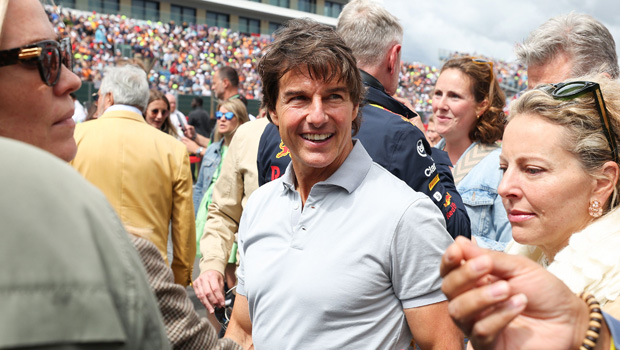 
Tom Cruise continued making memorable moments for his big 60th birthday this year. The actor started the week off strong when he attended a fancy dinner with a group of people, including Serena Williams, 40, and Natalie Portman, 41, at Novikov restaurant in London, England on July 4. He was photographed engaged in conversation with the tennis player and others as they enjoyed their delicious food, which reportedly included a birthday cake for him.

Tom wore a light blue polo shirt, jeans, and black boots during the outing and looked as happy as could be as he flashed smiles to people outside the dining establishment. Serena, who was also joined by her husband Alexis Ohanian, wore a pink sleeveless mini dress and black tights. Natalie wore an off-the-shoulder dark blue mini dress with white polka dots and was filmed signing autographs for fans after leaving the dinner.

Tom’s latest outing with his celebrity pals comes just three days after he was seen attending Adele‘s concert in London with his agent, Maha Dakhil. He was also spotted enjoying the British Grand Prix on his actual birthday, July 3. It was at the Silverstone Circuit in Northhamptonshire, England and he mingled in a crowd while chatting and smiling.

It was great to see Tom having many fun times as he welcomed in his 6th decade of life. The Top Gun: Maverick star reportedly went trough a recent breakup with his rumored girlfriend Hayley Atwell last month, but he seems to be getting along well as his latest public appearances have been some of the most frequent in a while. When he’s not taking advantage of some time off, Tom is hard at work in his acting career, so it’s no surprise his public outings are pretty rare.

Earlier this year, Tom celebrated the opening of Top Gun: Maverick, which is a sequel to his 1986 film, Top Gun, at various premieres. He reprises his role of U.S. Navy pilot, LT Pete “Maverick” Mitchell, in the film series and has been getting rave reviews. His next acting roles will be in the upcoming films, Mission Impossible: Dead Reckoning Part One and Part Two. CISOs, boards not always on the same page