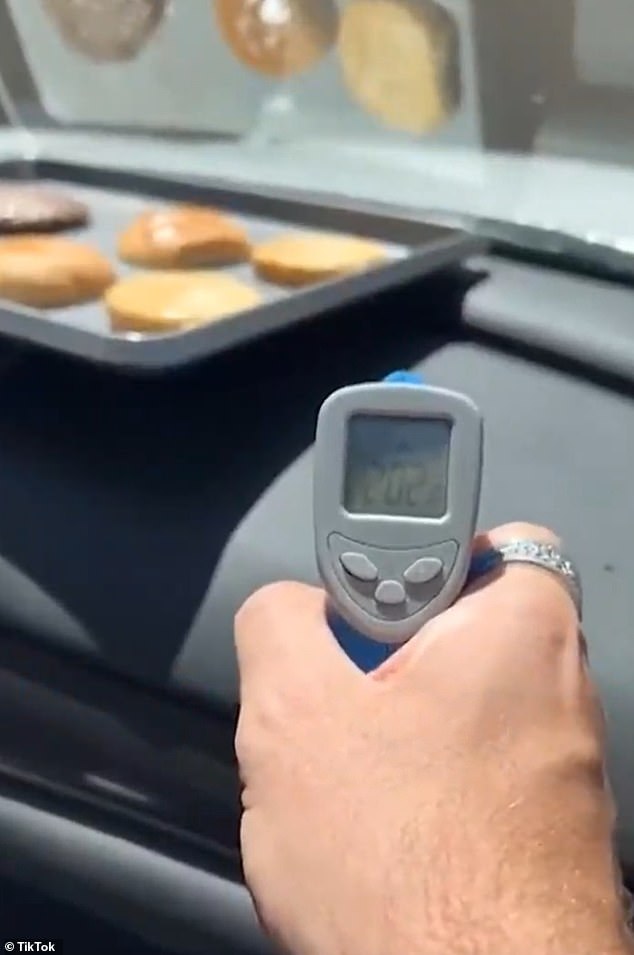 
An Arizona TikToker is using the record-breaking heat to his advantage by cooking mac and cheese, grilling burgers and steaks and even baking a cake inside his car as 230million are put under heat warnings that could see some cities – including Chicago – hit 100F for first time in 10 years.

The national heatwave hit this week with millions of Americans under heat advisories as a crippling heat dome settles over the bakes the southwestern and central United States.

A video posted to TikTok by Joe Brown has gone viral showing just how hot it is – hot enough to make mac and cheese.

In the video, Brown mixes uncooked mac and cheese noodles with water and cheese in a pan and places the mixture on the dash of his vehicle in Phoenix, Arizona.

He uses a thermometer to check the temperature which shows that it’s 200 degrees inside the car. He takes the mac and cheese out and devours it, giving the camera a thumbs up. Brown has a slew of other videos on his account showing how he can cook a variety of different foods in the heat of his car.

The record-breaking temperatures are expected to span nationwide this week.

A large swath of the nation, stretching from central Nebraska to West Virginia, north into Wisconsin and south into Mississippi will see the heat index rise from Monday morning until midweek, the National Weather Service said.

An Arizona TikToker is using the record-breaking heat to his advantage by cooking mac and cheese, burgers, steaks and even a cake inside his car

The heat index, a measure of what the temperature feels like to the human body, is expected to reach 100 degrees by Tuesday afternoon.

In Chicago, the high temperature is expected to reach 100 degrees on Tuesday, AccuWeather reported, for the first time in a decade.

Temperatures in the metro area – and Indianapolis – are typically around 80 degrees in June, but are expected to skyrocket to 100 this week.

The last time Chicago O’Hare International Airport  recorded a day with a temperature higher than 99 F in June was on June 28, 2012, AccuWeather reported.

The heatwave comes as power demand in Texas hit an all-time high on Sunday and will likely break that record this week as economic growth boosts usage and homes and businesses keep air conditioners cranked up to escape the lingering heat. 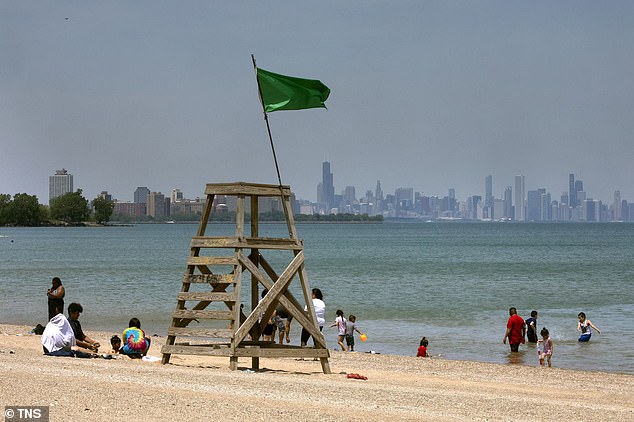 In Chicago, (pictured here on Memorial Day) is typically around 80 degrees in June – but this week, the high temperature is expected to reach 100 degrees for the first time since 2012 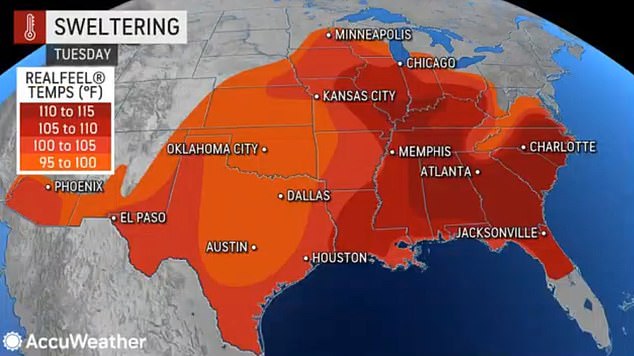 The heat was also expected to continue to scorch the Southwest and parts of Texas, where daytime temperatures will remain in the 100s in many parts of the region until Monday night

The weather service said many areas should expect ‘well above normal to record-breaking temperatures’ as it issued heat advisor and excessive heat warnings for the region.

‘Plan ahead to avoid heat-related illness and check on relatives and neighbors. The heat should break toward the end of the week,’ the weather service said on Twitter.

The heat was also expected to continue to scorch the Southwest and parts of Texas, where daytime temperatures will remain in the 100s in many parts of the region until Monday night, the weather service said. The mercury reached 114 degrees (45.5C) in Phoenix on Saturday, tying a record for the date.

AccuWeather Senior Meteorologist Dan Pydynowski said a large heat dome will become more expansive over the Central states, Midwest and Southeast over the next several days.

‘Cities such as St. Louis, Omaha, Nebraska, and even cities as far east as Charlotte and Raleigh, North Carolina, will be flirting with record high temperatures and triple-digit readings this week,’ Pydynowski explained.

‘Finally, by late in the week, a cold front will trim back the heat and bring some relief to portions of the Midwest and Great Lakes,’ Pydynowski said. 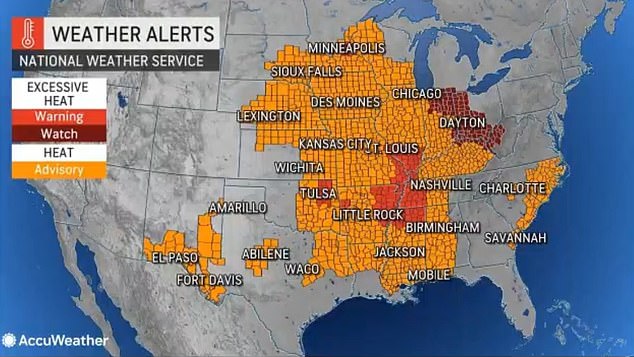 AccuWeather Senior Meteorologist Dan Pydynowski said a large heat dome will become more expansive over the Central states, Midwest and Southeast over the next several days 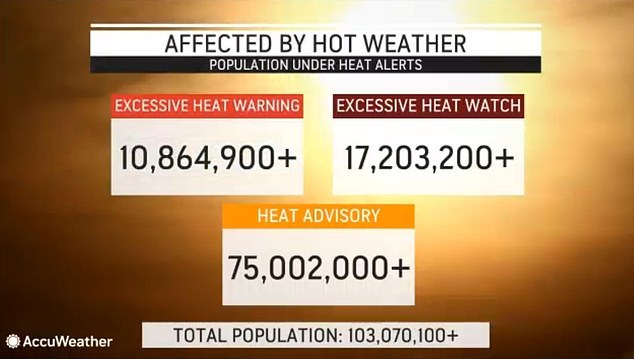 TIPS ON HOW TO AVOID HEAT STROKE

The Centers for Disease Control and Prevention released these tips to avoid heat stroke:

Power demand in Texas will likely break a record this week as economic growth boosts usage and homes and businesses keep air conditioners cranked up to escape a lingering heatwave.

The Electric Reliability Council of Texas (ERCOT), which operates the grid for more than 26 million customers representing about 90% of the state’s power load, has said it has enough resources available to meet demand.

The extreme weather is a reminder of the 2021 February freeze in Texas that left millions without power, water and heat for days during a deadly storm as ERCOT scrambled to prevent a grid collapse after an unusually large amount of generation was shut.

AccuWeather forecast high temperatures in Houston, the biggest city in Texas, would hit 97 Fahrenheit (36.1 Celsius) on Monday before easing to 92 F on Wednesday. That compares with a normal high of 92 F for this time of year. 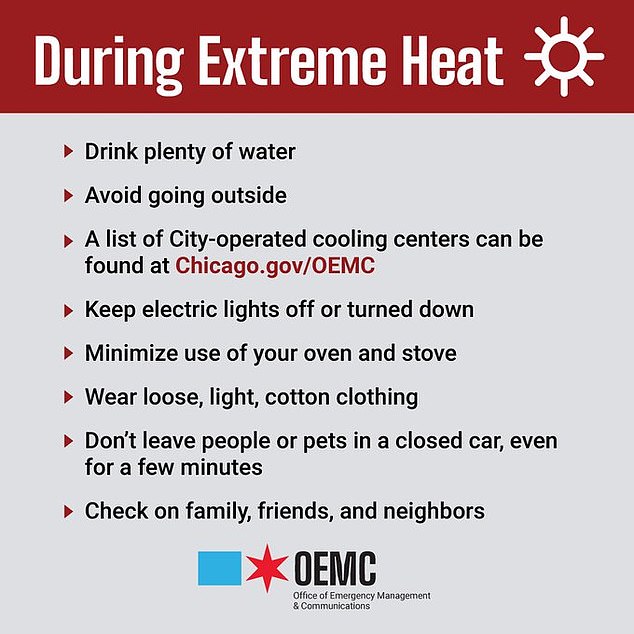 OEMC released tweeted tips for what to do during a heat wave as a Heat Advisory is to go in effect beginning Tuesday, June 14 at noon 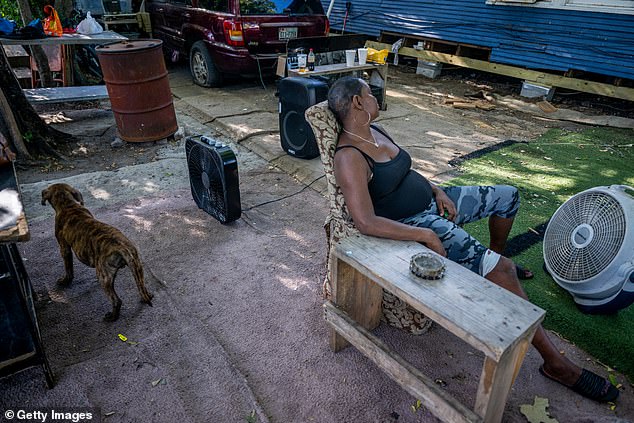 Yvette Johnson, 54, sits next to a fan outside of her families home on June 10, 2022 in Houston, Texas, which saw record high temperatures over the weekend 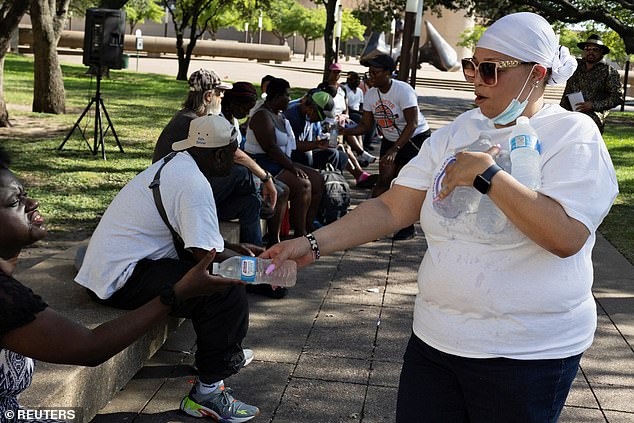 TK West, a volunteer with Dominion Tabernacle Ministries, gives out cold water bottles on Sunday during a heatwave with expected temperatures of 102 F in Dallas, Texas 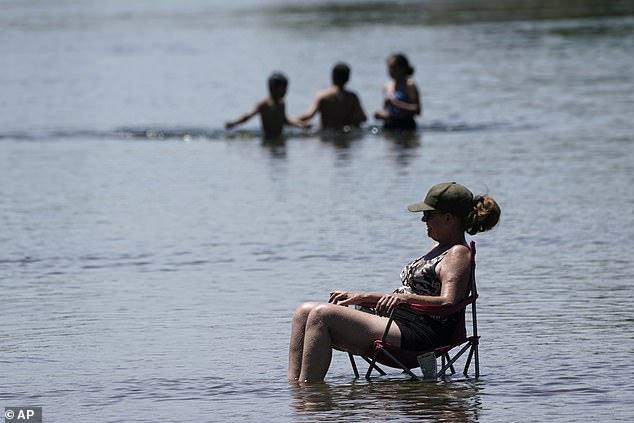 Record-breaking temperatures starting hitting the US on Friday and forecasters are warning that the heat will continue this week. Pictured: A woman relaxing in the cooling water of the American River as the temperature climbed over 100F in Sacramento, California 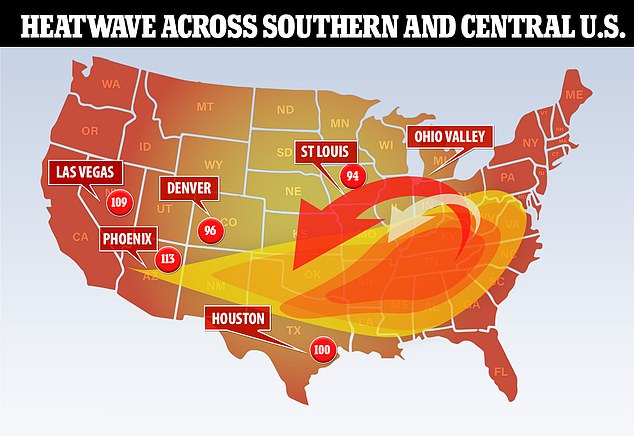 Cities such as Las Vegas, Phoenix and Denver observed record-highs in June over the last week while the Death Valley in California has also observed scorching temperatures

One megawatt can power around 1,000 U.S. homes on a typical day, but only about 200 homes on a hot summer day in Texas.

Despite the record-setting demand, power prices at the ERCOT North Hub, which includes Dallas, fell from a four-week high of $141 per megawatt hour for Friday to $100.00 for Monday. That compares with an average of $62 so far this year.

ERCOT forecast economic growth would boost peak demand to 77,317 MW this summer. The grid expects new wind and solar power plants added over the past year will increase resources available this summer to 91,392 MW. 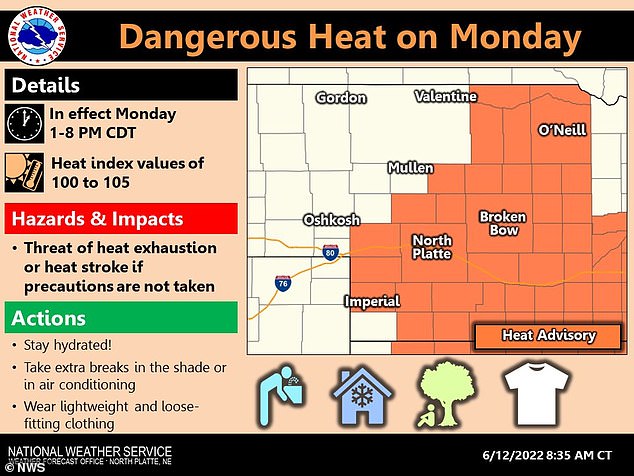 Pictured: A National Weather Service warning for the area of North Platte, Nebraska

It’s estimated that 230 million people will be seeing temperatures of at least 90F in the coming days, with 45 million of those seeing their thermostats get into the triple digits.

Around 140 cities will see record breaking temperatures this week with the heat wave possibly stretching as far north as Michigan. Iowa is also expected to suffer through temperatures around 100F.

In Louisville, Kentucky, temperatures in the upper 90s are expected during the day on Tuesday and only dropping into the 80s by nightfall. Highs in the city will remain around that level until next Saturday when they drop to 85.

Tennesseans are warned to expect temperatures in the 90s that will feel like the 100s thanks to wind from the Gulf of Mexico bringing moisture and creating humidity in the area. Those temperatures will last until Thursday.

Kansas will see temperatures in the middle to upper 90s for the next few days that due to the humidity will feel around 100 to 105F.

A record will be broken in St. Louis too if the hits 101F on Tuesday as expected, the previous record was 97F. The temperature will remain in the triple digits this week.

On the east coast, South Carolina will see temperatures that will feel like between 100F and 105F throughout the week.

As will North Carolina, with Charlotte expected to break its temperature record for June that was set back in 1958 when temperatures hit 97F.

Respite for the Carolinas in the heatwave will be mild at best with 90F predicted for next Saturday.

Current models show that the heatwave will start to move back west by the end of next week, although central Texans will get no respite as temperatures will stay close to 100F all week in the area.

According to The Weather Channel, Phoenix will experience another day of 114F temperatures on Thursday. The city hit that record equaling number already on Sunday.

The National Weather Service said that Los Angels County will see ‘potentially dangerous’ temperatures in the area again by Thursday. Over the weekend, LA County saw temperatures of 100F in some inland areas.

On Thursday, weather in Phoenix could reach 113F, just nine degrees cooler than the hottest temperature recorded in the area – 122Fin 1990, according to AZ Family. 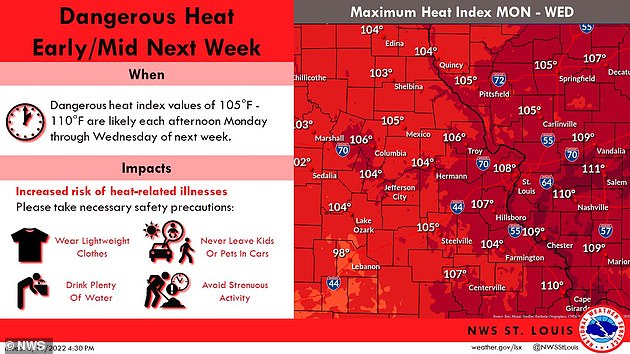 Throughout the weekend, more than 70 million of Americans were under heat alerts after Phoenix, Las Vegas, Denver and California’s Death Valley all posted record temperatures on Saturday, as dangerous and ‘potentially deadly’ heat sweeps across the American Southwest to the Gulf Coast.

Las Vegas tied a record for the day set in 1956, with temperatures soaring to 109F on Saturday.

Denver, Colorado, hit 100F on Saturday, tying a record set in 2013 for both the high temperature and the earliest calendar day to reach 100F. High heat is expected to remain in the area until Tuesday, where conditions will drop to mid-80s Fahrenheit. 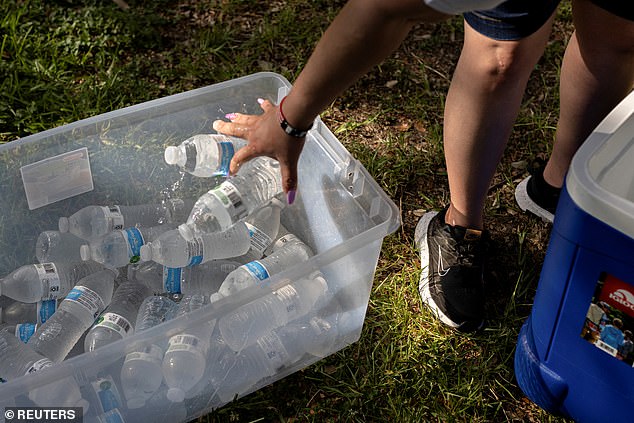 Pictured: A volunteer with Dominion Tabernacle Ministries, prepares cold water bottles to hand out during a heatwave on Sunday 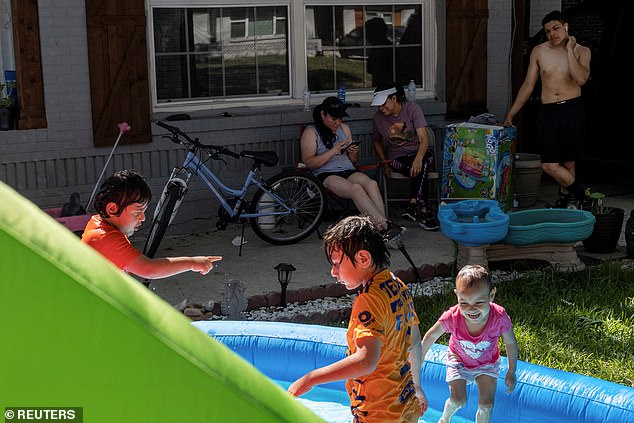 Maria Hernandez, Luisa Ortega and Issac Montelongo sit outside as they watch the kids play in water during a heatwave with expected temperatures of 102 F in Dallas, Texas, on Sunday

Heat is part of the normal routine of summertime in the desert, but weather forecasters say that doesn’t mean people should feel at ease.

Excessive heat causes more deaths in the U.S. than other weather-related disasters, including hurricanes, floods and tornadoes combined.

Meteorologists advise people in these affected areas to drink more water than usual during peak hours of the heat, wherever they may be.

Wearing protection, including hats, sunscreen and sunglasses, is also advised. It’s not recommended to wear dark clothes as black clothing often transmits heat to the skin, making a person hotter.

Scientists say more frequent and intense heat waves are likely in the future because of climate change and a deepening drought. 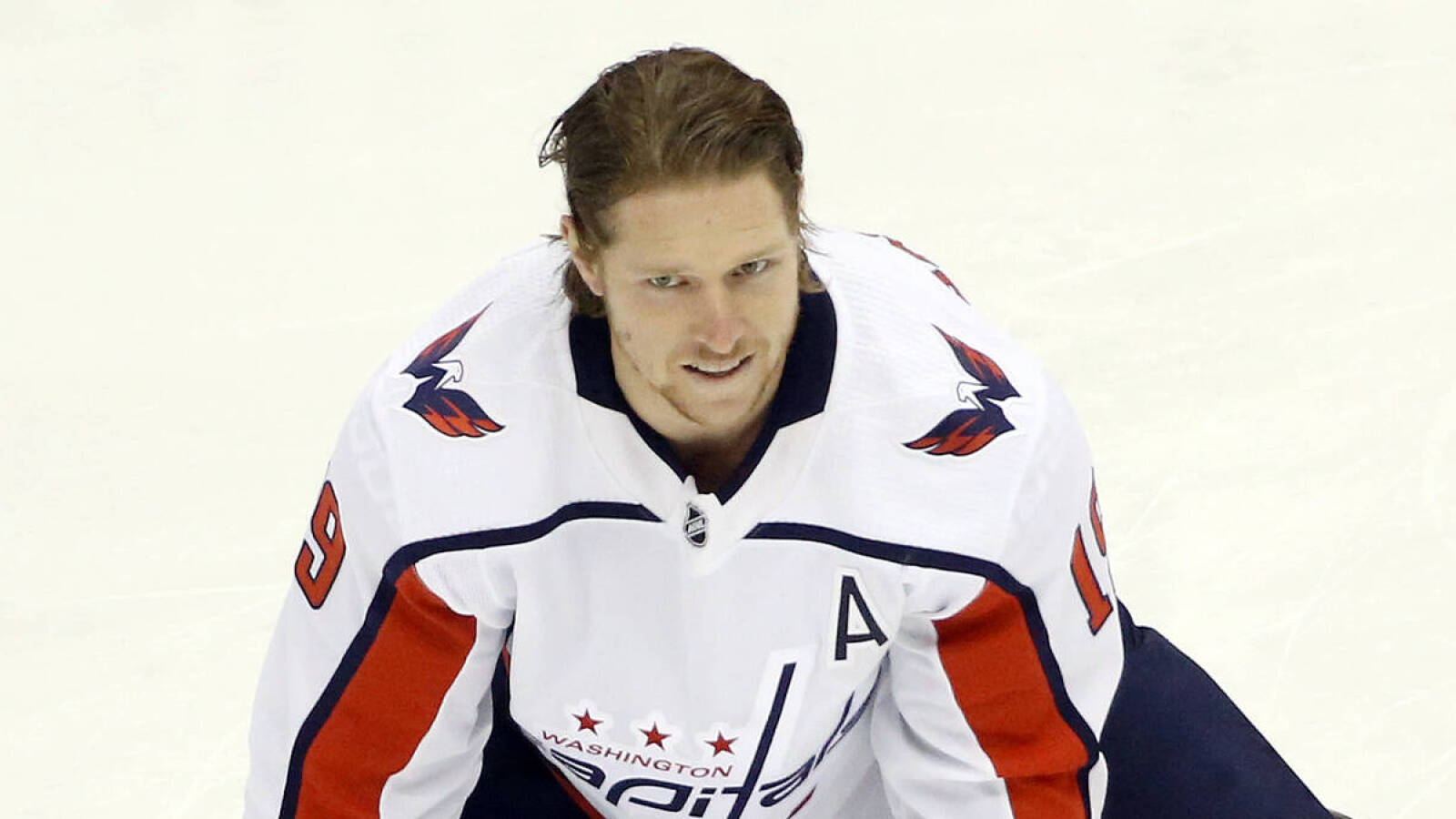 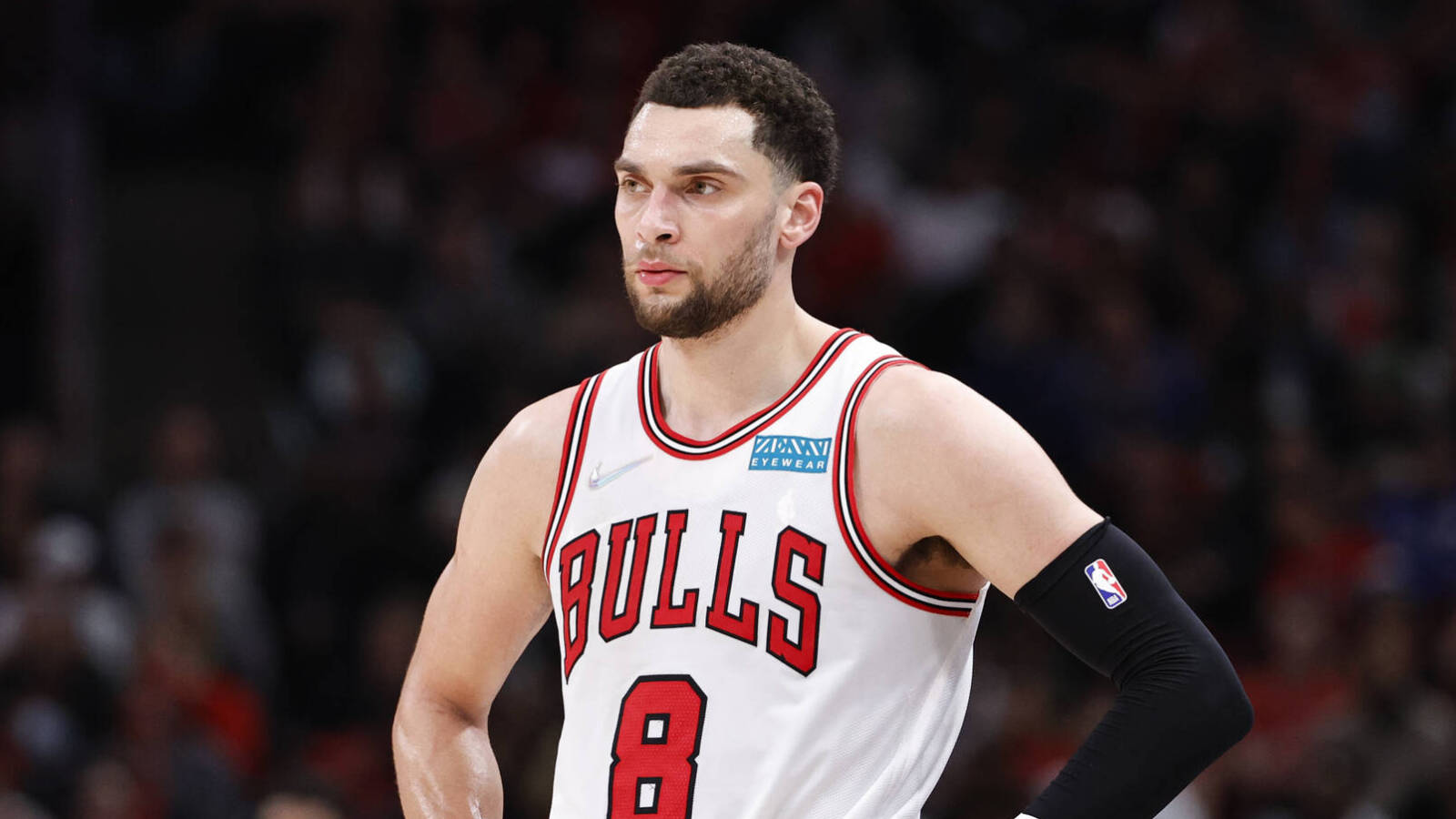 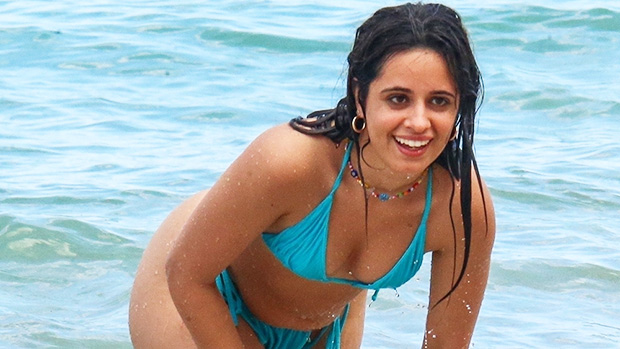