Throngs of avid tennis lovers were spotted at Wimbledon today ready to secure tickets for tomorrow’s opening matches, with some making themselves quite at home outside the club.

Deck chairs, rugs and fans for the summer heat were just some of the ways spectators kept their cool while pitching up their tents ready for tomorrow’s first playoff.

The tents were spotted being neatly arranged in rows at Wimbledon Park in south west London today in anticipation of Monday’s opening, with Andy Murray facing Australia’s James Duckworth in the first round.

It is the first time in three years that Wimbledon’s stalls will be back at full capacity, after the 2020 event was cancelled due to the Covid pandemic.

Last year’s Wimbledon was held at 50 per cent capacity and spectators were required to have tested negative for Covid beforehand.

All eyes will be on Novak Djokovic and Rafael Nadal, whose attendance had been in doubt this year.

The lifting of Covid vaccine restrictions has made it possible for Djokovic to appear, while it is believed Nadal will overcome the pain of a foot injury to win his first Grand Slam.

A woman makes herself at home at Wimbledon Park ready for tomorrow’s opening, with deck chairs and bags filled with camping equipment 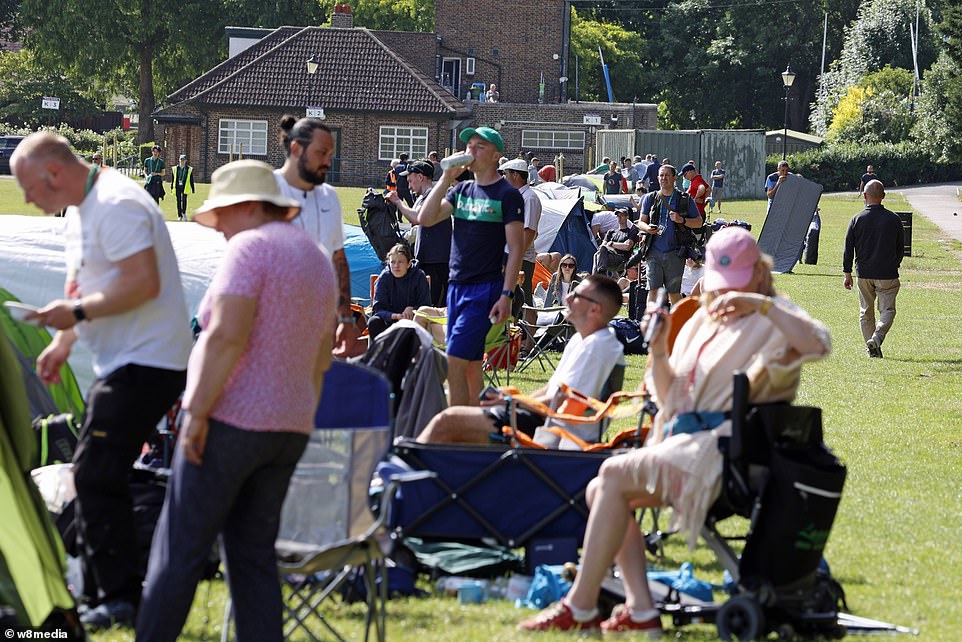 After p[itching up their tents, Wimbledon’s earliest arrivals kicked back with cans and food as they enjoyed the summer weather 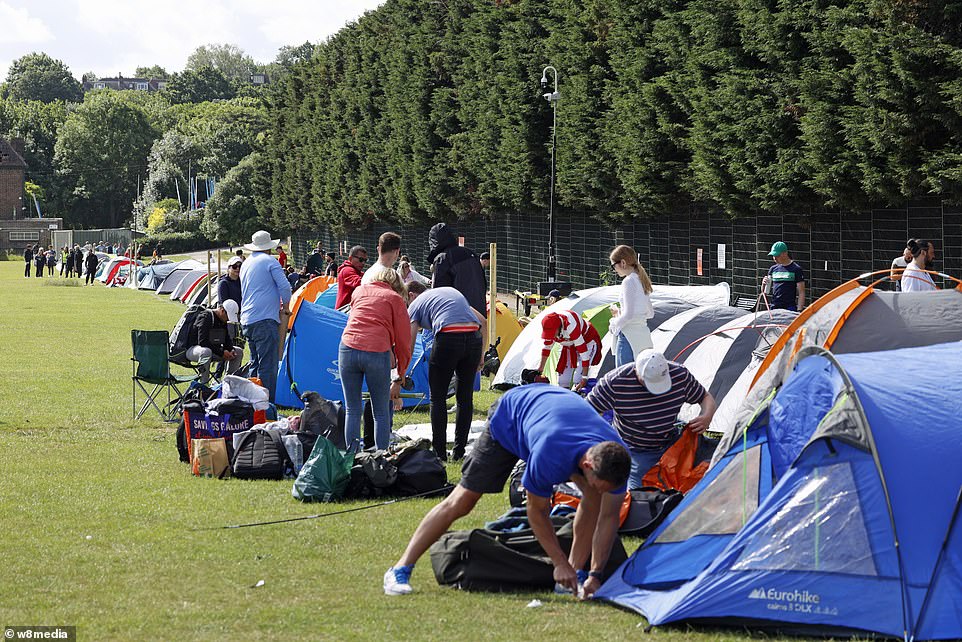 Order order! The organisation at Wimbeldon Park was honed down to a tee, as campers arranged their tents in a near perfect straight line 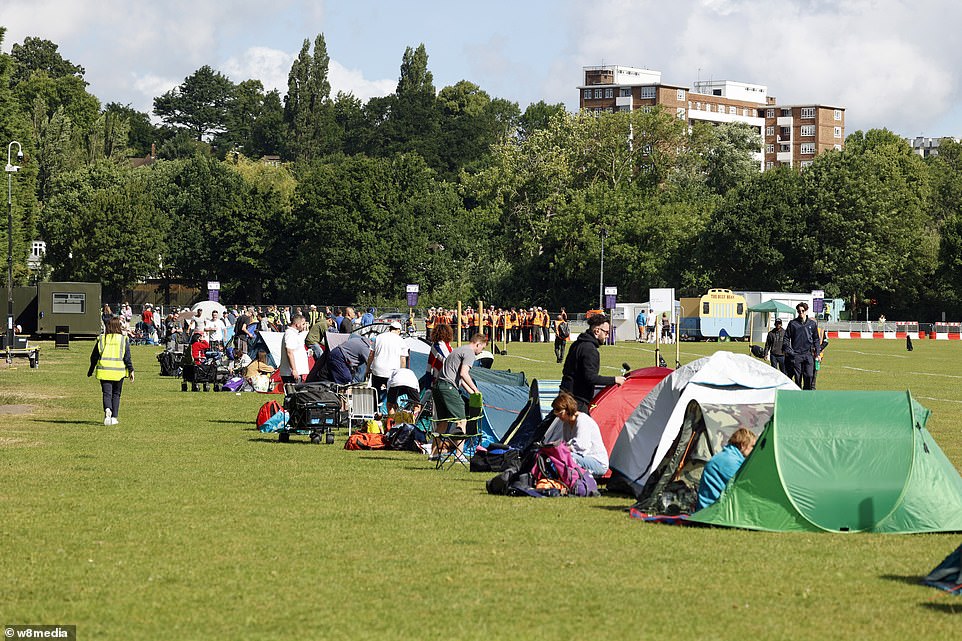 For many viewers, it will be their first chance to watch live tennis in over three years after 2019’s event was cancelled 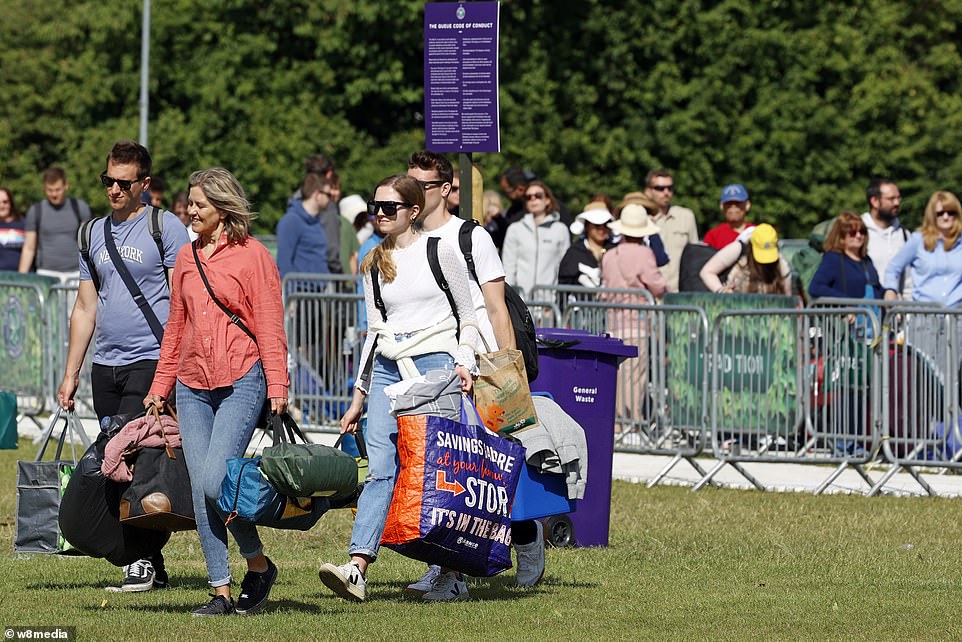 Attendees came fully stocked and well-prepared for the two-week event, which is set to feature matches every single day 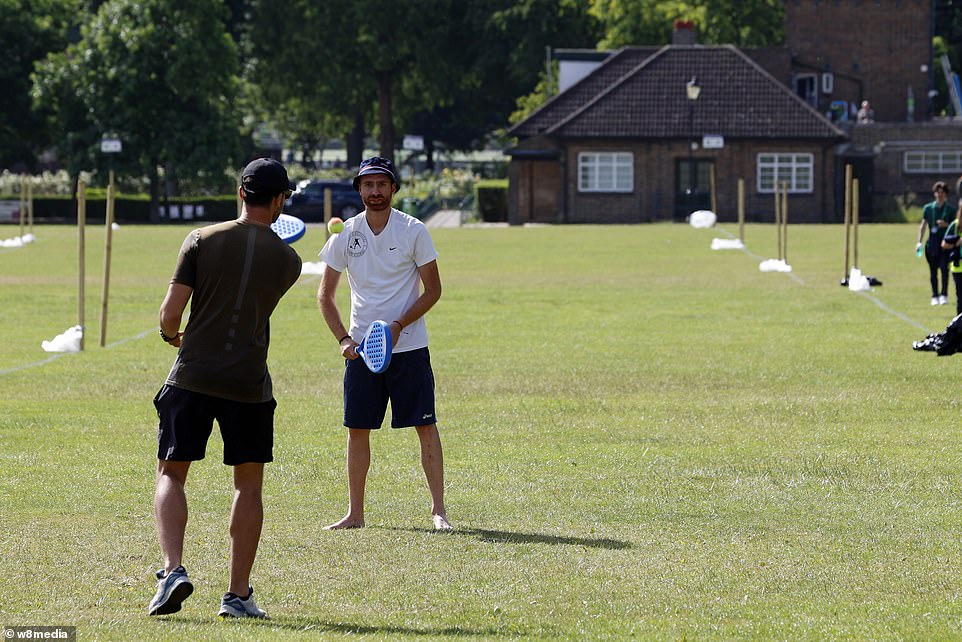 Getting in the spirit! Two tennis fans played off in their own singles match as excitement brewed for tomorrow’s opening. 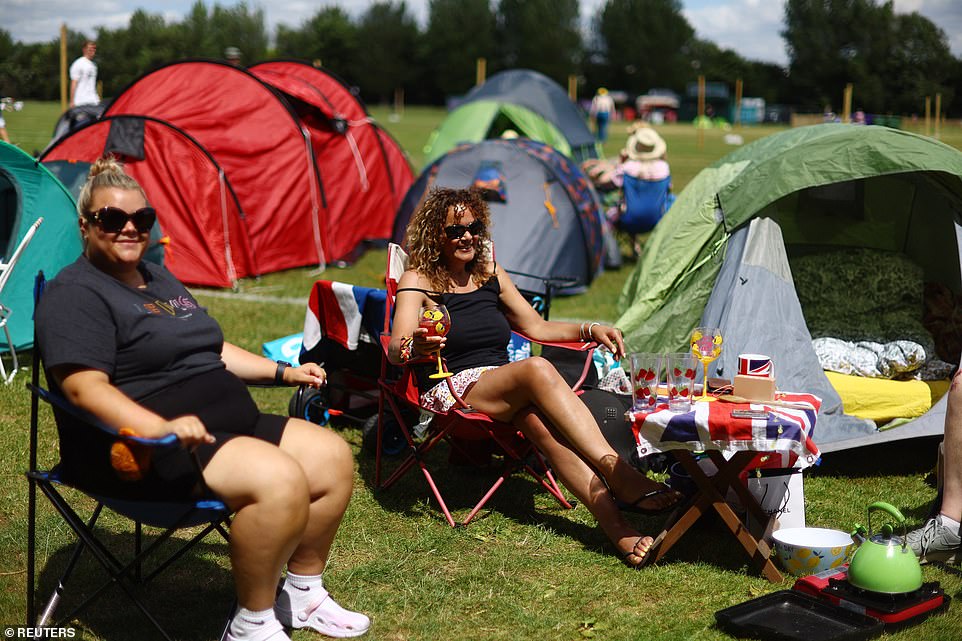 Fans camp in the queue ahead of Wimbledon, in preparation for tomorrow’s first matches

Most tickets to the tennis world’s biggest event are distributed through a ballot. After the event’s cancellation two years ago, this year’s ballot was closed to the public to allow the winning ticketholders from 2020 the chance to finally use them.

But those without ballot tickets can camp overnight in Wimbledon Park to gain early entry to the courts the next day. Typically, campers are given a numbered queue card, allowing them to set up tent for the night.

The following morning, the campers are woken by the club’s stewards and must put away their tents in the venue’s left luggage. Then, they get back into a queue in the order of their queue cards, in order to receive wristbands from stewards – allowing them access to the court gates – where they can pay for tickets to the match.

Wimbledon’s earliest arrivals kicked back with cans and food as they enjoyed the summer weather. The organisation at Wimbeldon Park was honed down to a tee, as campers arranged their tents in a near perfect straight line.

Attendees came fully stocked and well-prepared for the two-week event, which is set to feature matches every single day.

British favourite Emma Raducanu says it is ‘full steam ahead’ for Wimbledon after worries about her fitness in the build-up to her home Grand slam. 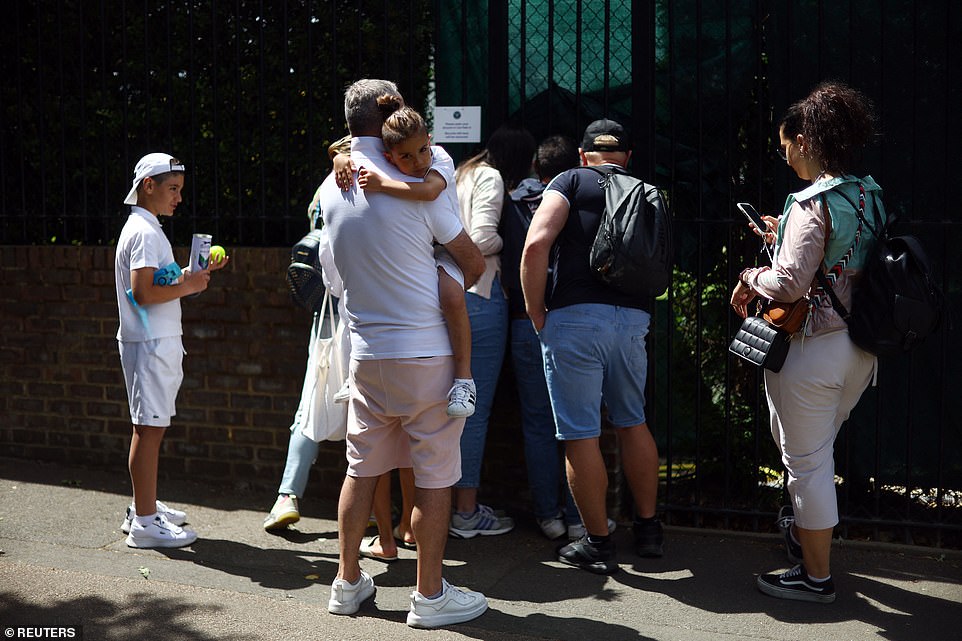 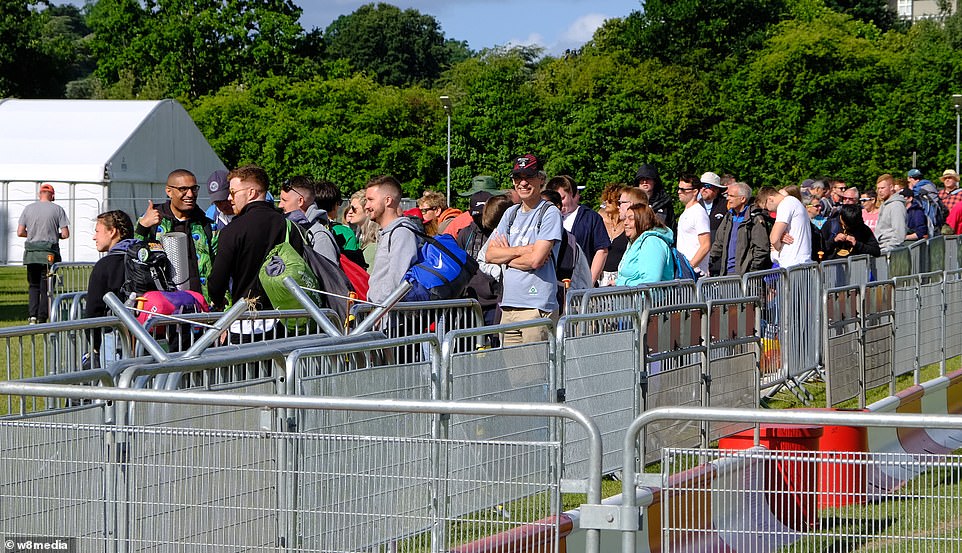 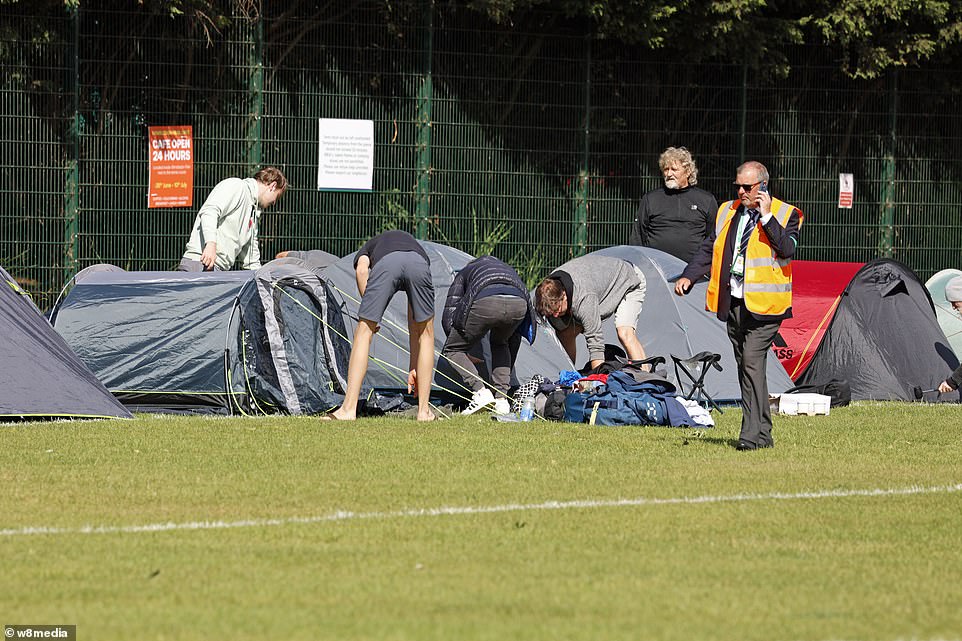 The campsite at Wimbledon is closely regulated, with tents neatly arranged into rows at the behest of organisers 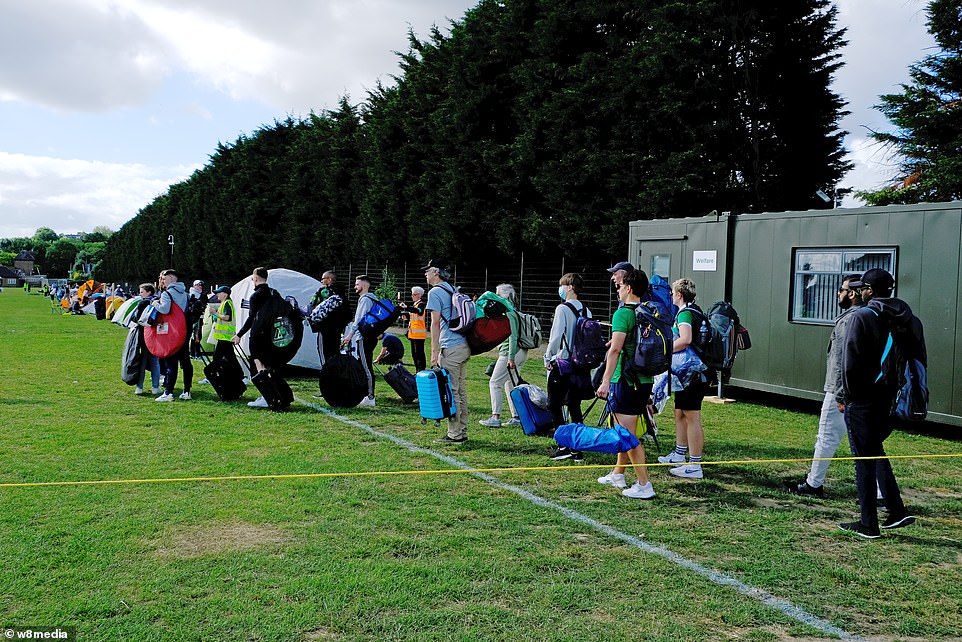 It was a fine dat for pitchers to be setting up tent at Wimbledon, with temperatures expected to reach 20 Degrees Celsius (68F) 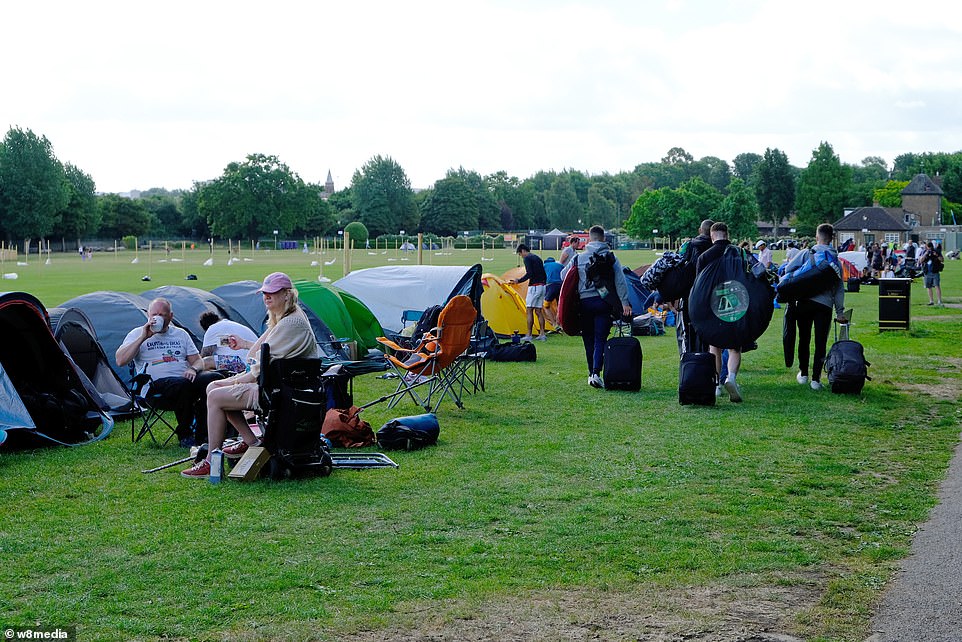 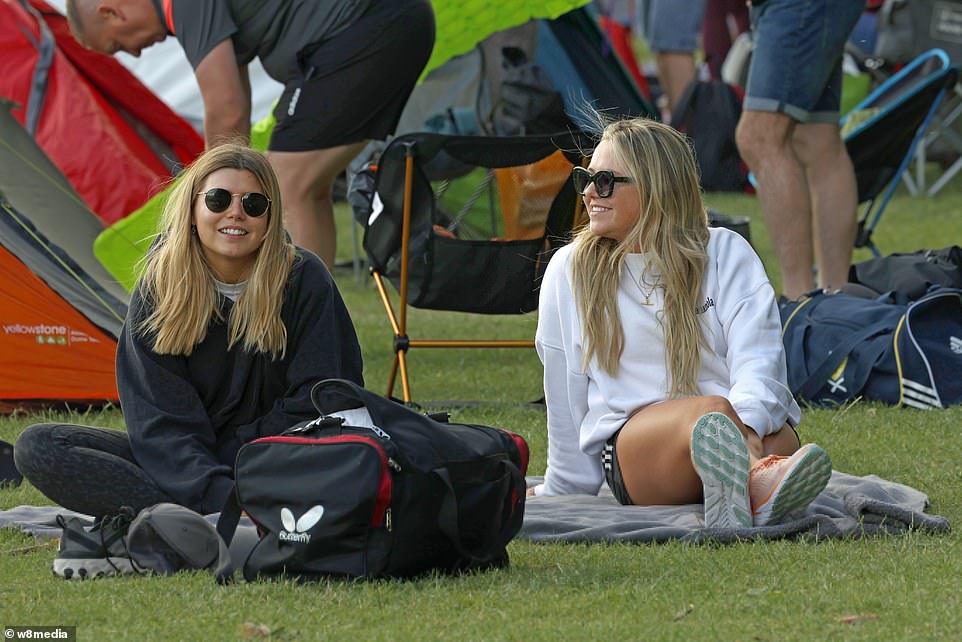 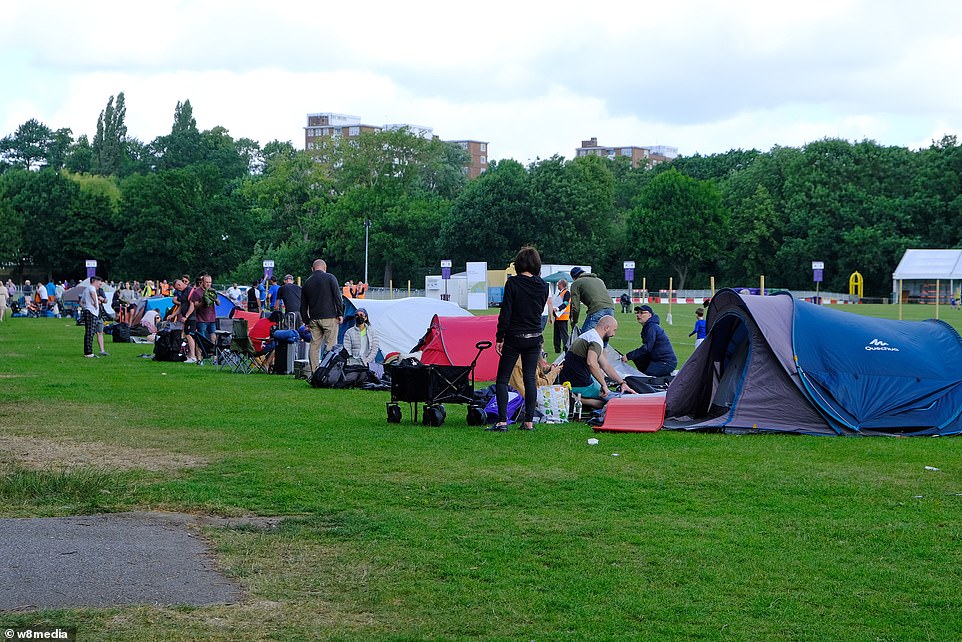 Second row! As more ticketholders arrived at Wimbledon Park, a second row of tens was formed 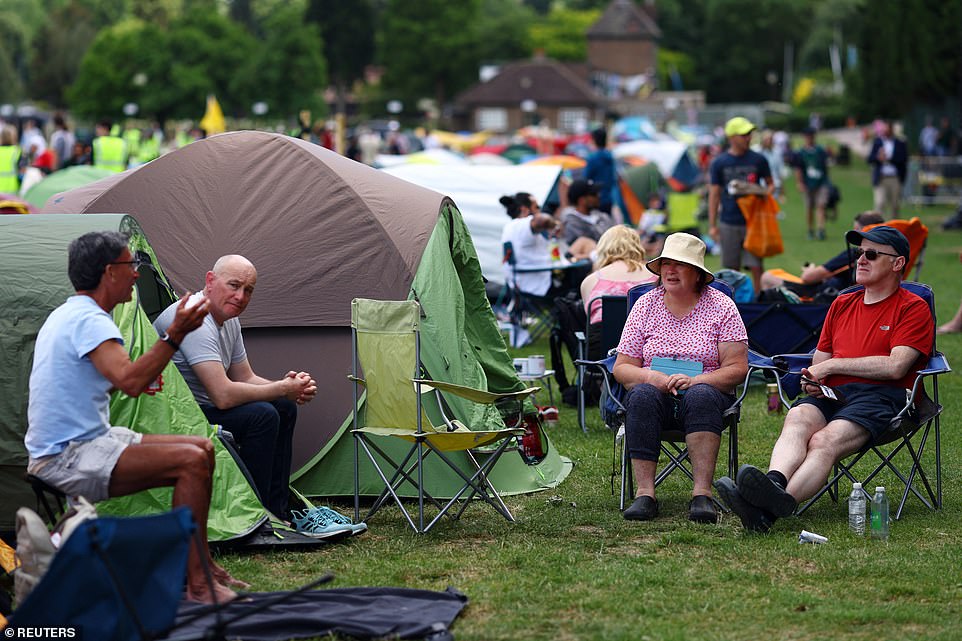 After settling down for the day, campers relaxed on fold-up chairs and socialised in the warm weather 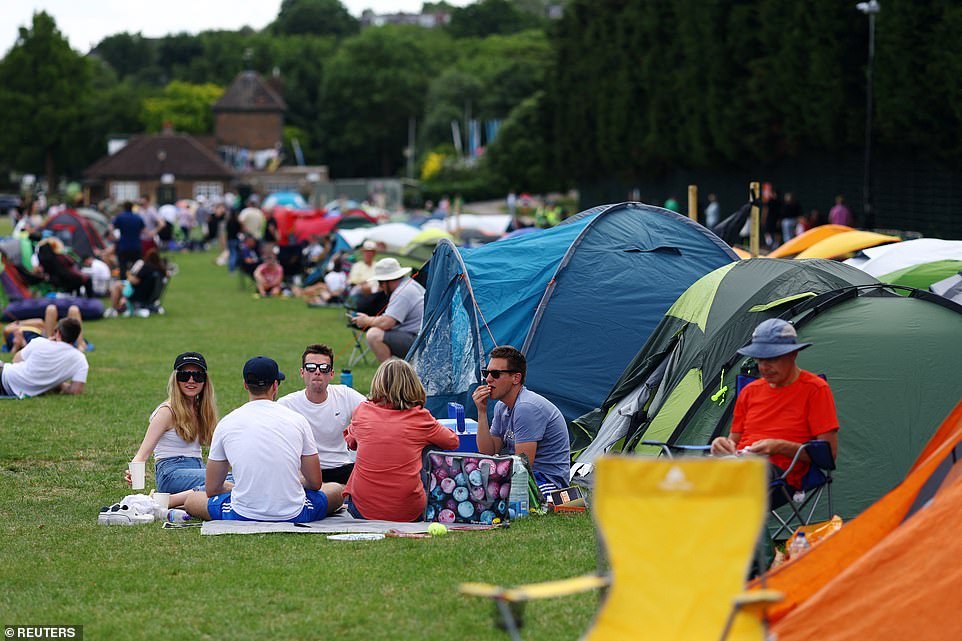 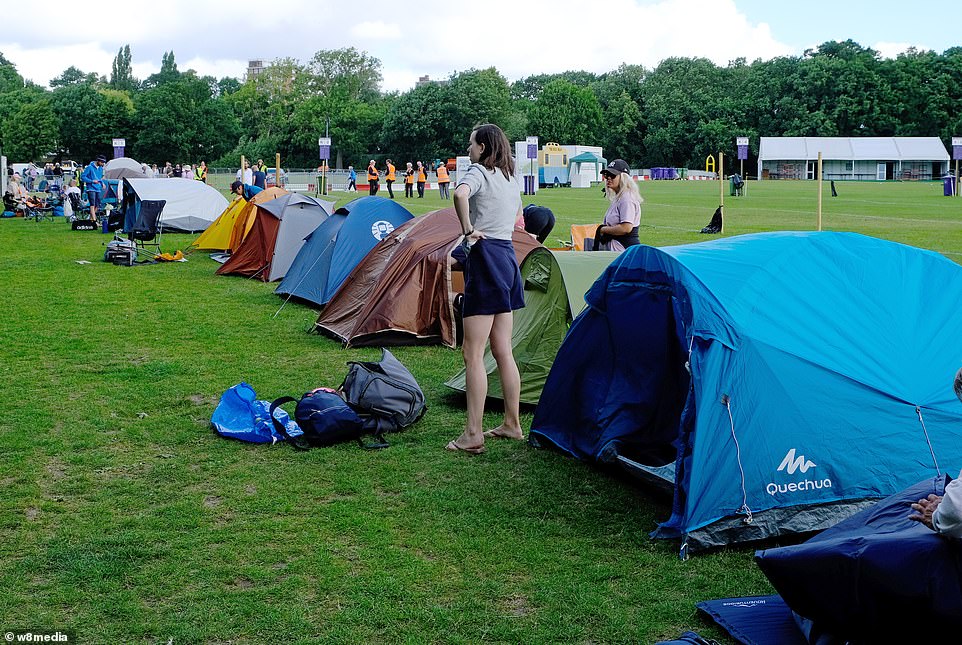 Teenager Raducanu rocketed to fame when she won the U.S. Open last year as a qualifier and expectations will be huge when she plays her first round match on Monday.

A side injury has hampered Raducanu in recent weeks and she has failed to complete a match since the French Open – hardly great preparation for the fortnight.

But the 10th seed sounded upbeat when she spoke to media on Saturday, playing down the fact that she pulled out of her second practice session on Friday.

‘I’ve definitely been managing it since Nottingham. I took two weeks off,’ Raducanu said. 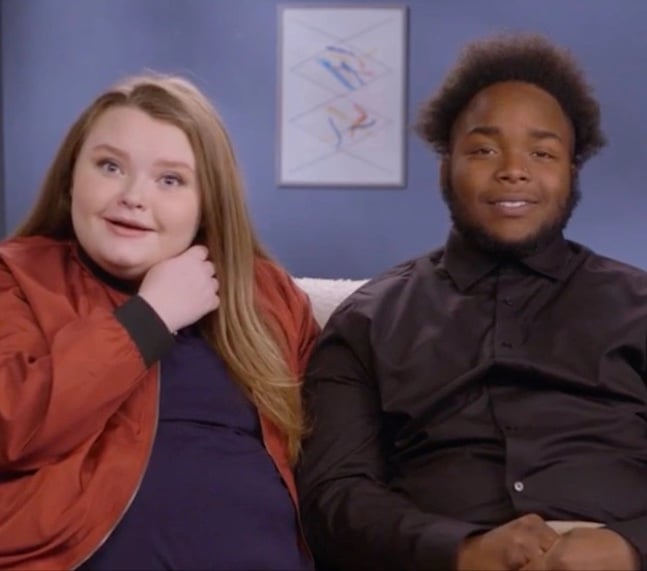