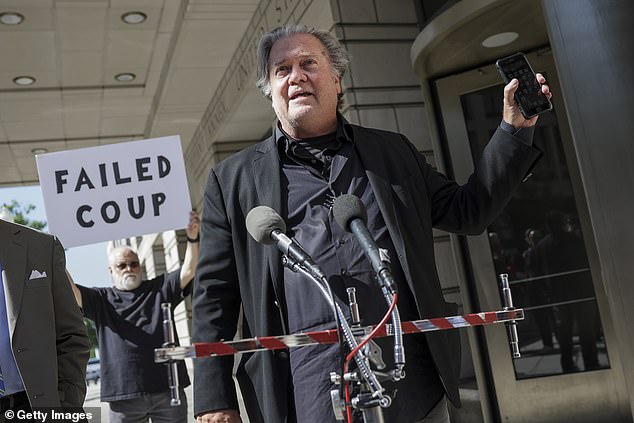 
Former Trump White House chief strategist Steve Bannon cheered MAGA election victories and blasted the House Jan. 6th committee on the steps of a federal courthouse Wednesday while his lawyers argued inside to try to dismiss a contempt charge that could land him in jail.

Bannon took a dig at the House panel, which announced yesterday it had cancelled a scheduled hearing on Wednesday which was to focus on a clash inside the Trump Justice Department.

The next hearing will be Thursday after the unexplained delay.

‘Look, I want to appreciate the J6 committee canceling today. You know why? Their ratings stink and they can’t compete with the trial of Bannon,’ he quipped.

‘That’s why they canceled. You know who says that? The people in the Rio Grande Valley, Hispanic Americans, who blew out the Democratic party last night,’ he said.

He was representing Republican Mayra Flores’ victory in a special election to fill a seat long held by Democrats.

‘This seat has been a democratic seat since Reconstruction since the Civil War, lost last night by the Democratic Party,’ he said.

The 20 million figure equaled the Brett Kavanaugh Supreme Court confirmation hearings while he was being accused of assault by Christine Blasey Ford, and surpassed daytime Trump impeachment hearings.

Soon after Bannon issued his defiant statement, Judge Carl Nichols of the DC District Court rejected his lawyer’s plea to dismiss the case.

The court cannot conclude as a matter of law” that the committee was improperly constituted, nor that Bannon is correct to argue that this subpoena wasn’t properly cut and the indictment is invalid, Nichols said Wednesday, turning back Bannon’s claims on immunity and privilege.

‘The court cannot conclude as a matter of law that the committee was invalidly constituted,’ he said, rejecting Bannon’s legal case against the validity of the committee itself, which was created by the Democratic majority. 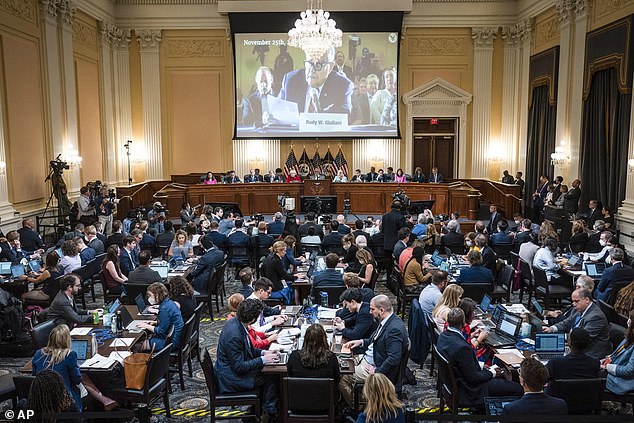 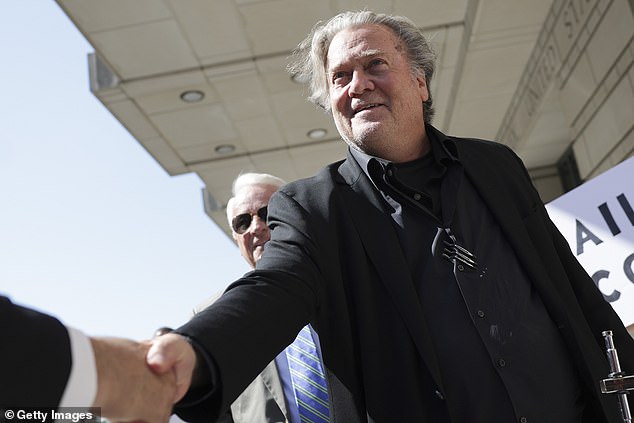 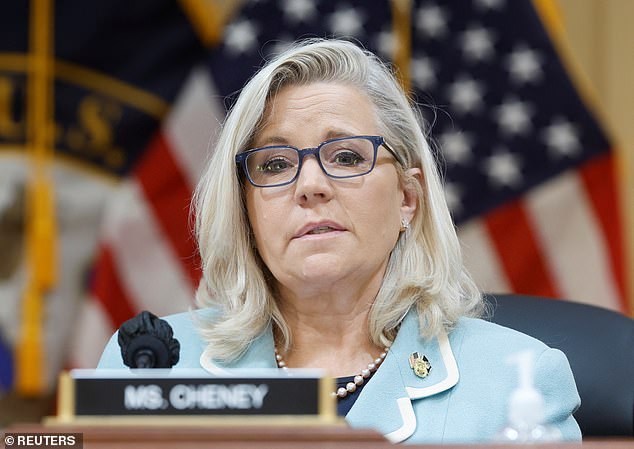 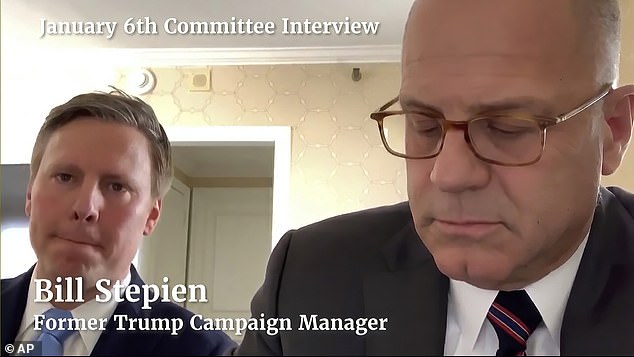 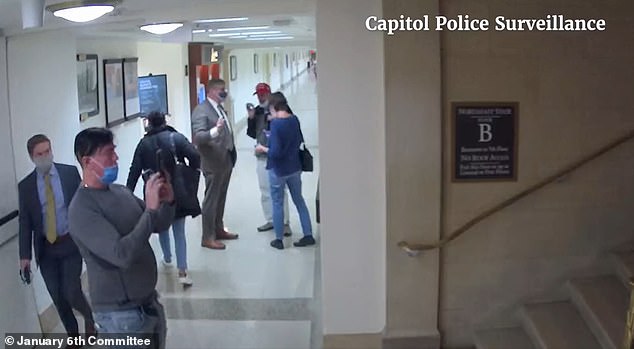 The committee released video of what it described as a ‘surveillance tour’ conducted by Rep. Barry Loudermilk (R) of Georgia 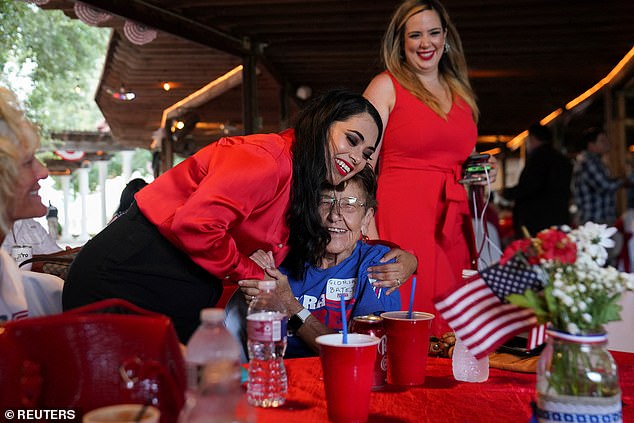 Republican Mayra Flores (pictured hugging a supporter in San Benito, Texas, on Tuesday before the results were announced) made history last night by becoming the first Mexican-born congresswoman to serve in the House after beating a Democrat in a primary election in Texas

Bannon also praised the win of MAGA candidate Jim Marchant in the Nevada Secretary of State race. He sued after his own loss in another race in 2020 despite being down by 5 per cent of the vote, and also denied Joe Biden’s victory over Trump that year.

A win in November would give him control of an office with oversight of fair enforcement of elections.

‘He had a blowout win in the primary. MAGA is on the march the J6 committee is totally irrelevant,’ Bannon said.

He also responded to a reporter’s question about whether he saw the U.S. being an ‘autocratic-type MAGA ruled government,’ and said the gains would be done democratically.

‘We believe in the ballot box. We believe in fair and free and transparent elections. And we’re winning everywhere,’ he said.

A protester held up a sign that said ‘FAILED COUP’ while Bannon spoke.

His attacks on the committee came days after it featured testimony from former top Trump officials saying his claims of election fraud were false. That included former Attorney General Bill Barr testifying he told Trump the claims were ‘bull****’ and pushback from his former campaign manager Bill Stepien.

Bannon’s lawyers were in court to ask a judge to dismiss a federal indictment charging him with criminal contempt.

In the race Bannon highlighted, Republican Mayra Flores became the first Mexican-born congresswoman elected to the House after she beat a Democrat in a special election in Texas.

She won the special election to finish the term of former Democratic Rep. Filemon Vela, who resigned this year to become a lobbyist.

Flores, a GOP organizer who is the daughter of migrant workers and a respiratory care practitioner, will hold the seat for several months before the district is redrawn to be more favorable to Democrats. 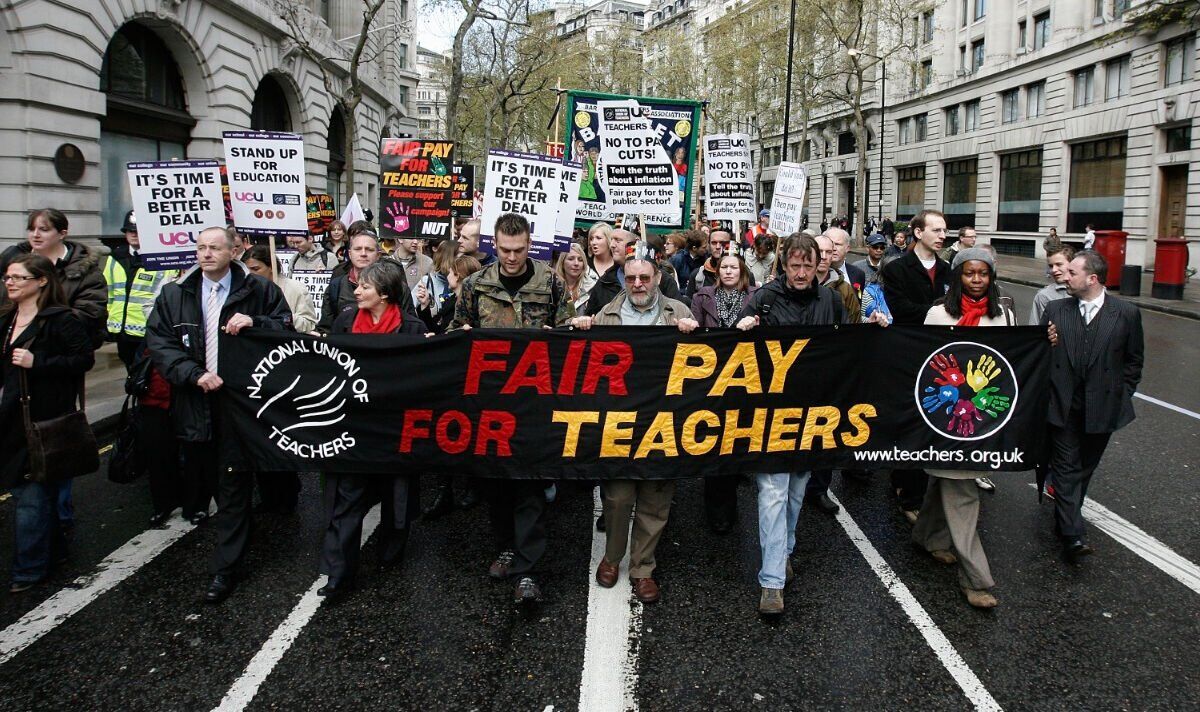