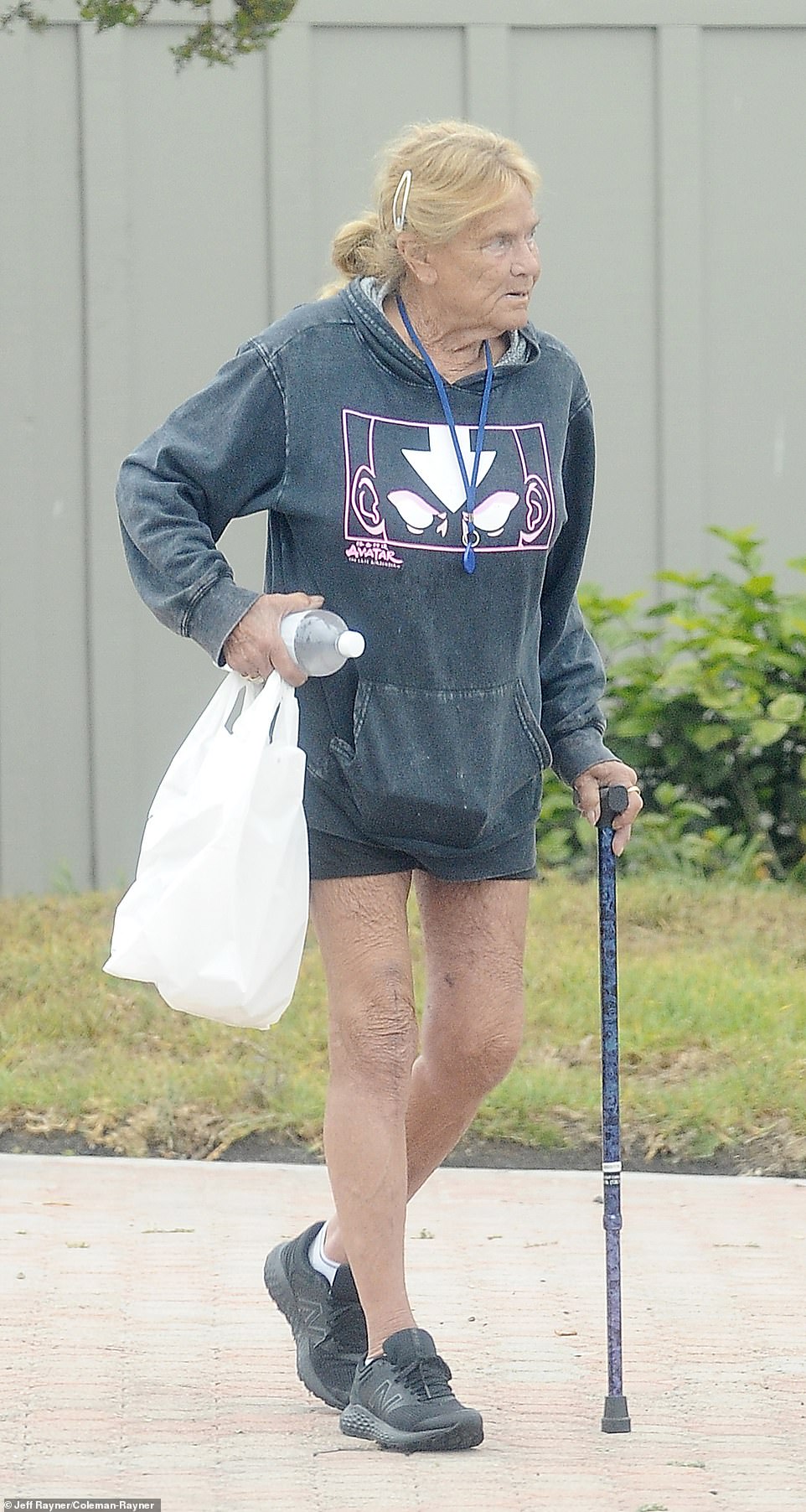 
Her film debut is often regarded as one of the most iconic opening scenes in Hollywood history.

Then 28, actress Susan Backlinie left audiences gasping in terror when she was eaten alive by a great white shark in the first installment of Steven Spielberg’s horror masterpiece, Jaws.

Now, 47 years since the release on June 20, 1975, DailyMail.com can reveal the retired actress is involved in choppy waters once again – this time with the law.

Retired actress Susan Backlinie Swindall was seen running errands near her home in Ventura County, California last week, days before the 47th anniversary of the release of blockbuster film Jaws 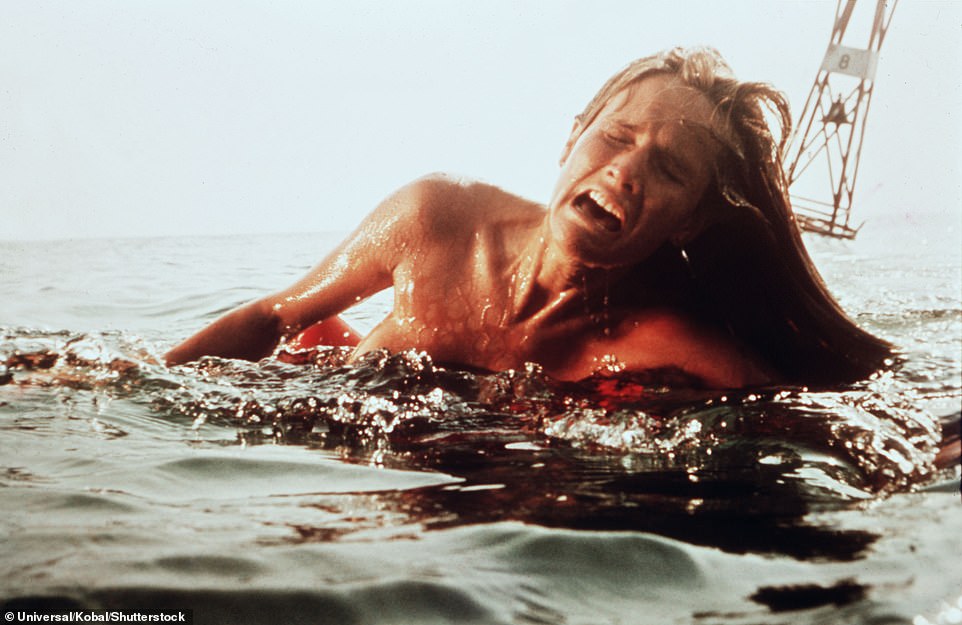 The former actress and stuntwoman is known for her role as Chrissie Watkins, the beachgoer who was torn to pieces by a great white shark in the 1975 Steven Spielberg classic 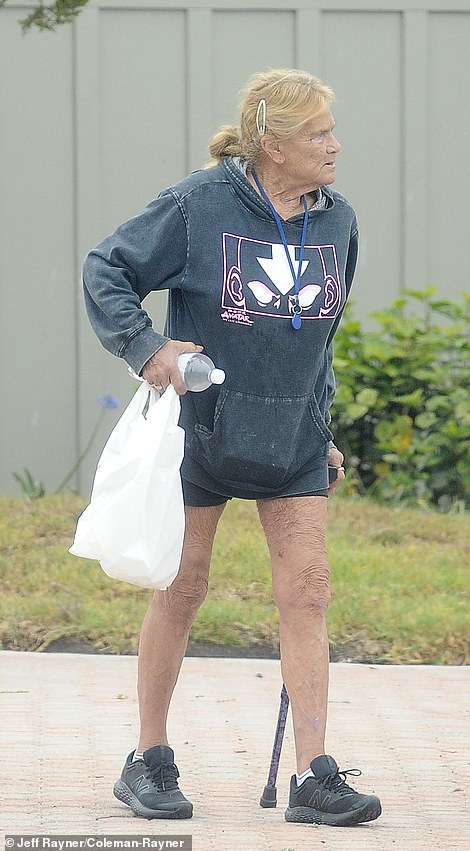 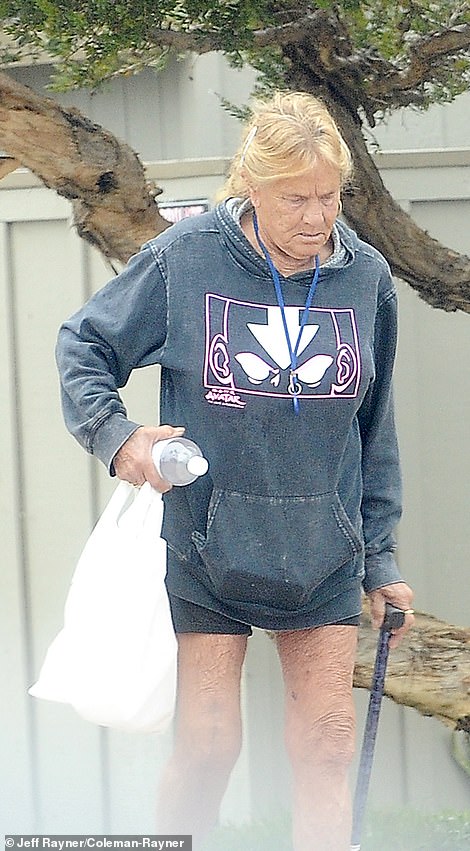 Backlinie, now 75, made her film debut at the age of 28, starring in the most iconic opening scenes in Hollywood history

Backlinie is due to appear in court this November, after being arrested in August 2020 and charged with battery, according to public records.

The 75-year-old, who is listed under her marital name of Susan Swindall, has pleaded not guilty to the charges.

A judicial review hearing is now scheduled for November 14 to assess her case.

The incident is not Backlinie’s first run-in with local authorities.

Back in 2019, the former actress and stuntwoman was charged with a DUI after careening into another vehicle in her local neighborhood.

She appeared bleary-eyed and injured in her official mug shot, displaying what appeared to be a nasty wound at the top of her forehead.

Just days before the 47th anniversary of the iconic film’s release, DailyMail.com found Backlinie running errands in her neighborhood and obtained exclusive photos.

Wearing a baggy hoodie, shorts, and sneakers and walking with a cane, she looked deep in thought while clutching a bag of groceries and a bottle of water. 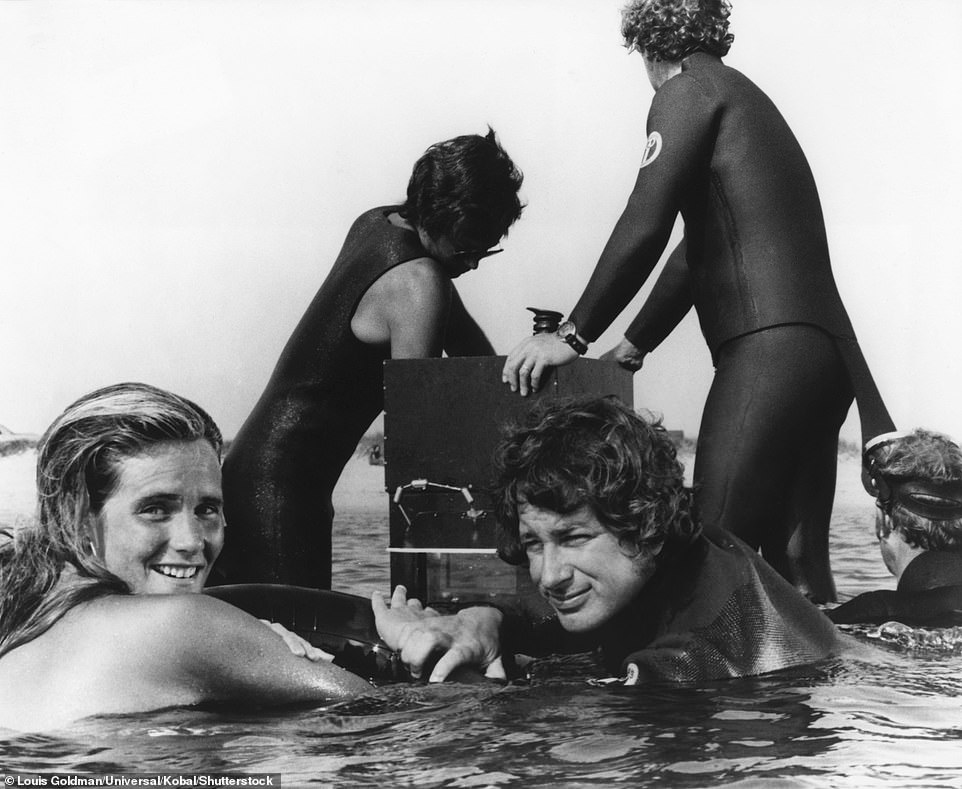 Backlinie, pictured on set with Steven Spielberg, left audiences gasping in terror when she was eaten alive by a great white shark in the first installment of the film 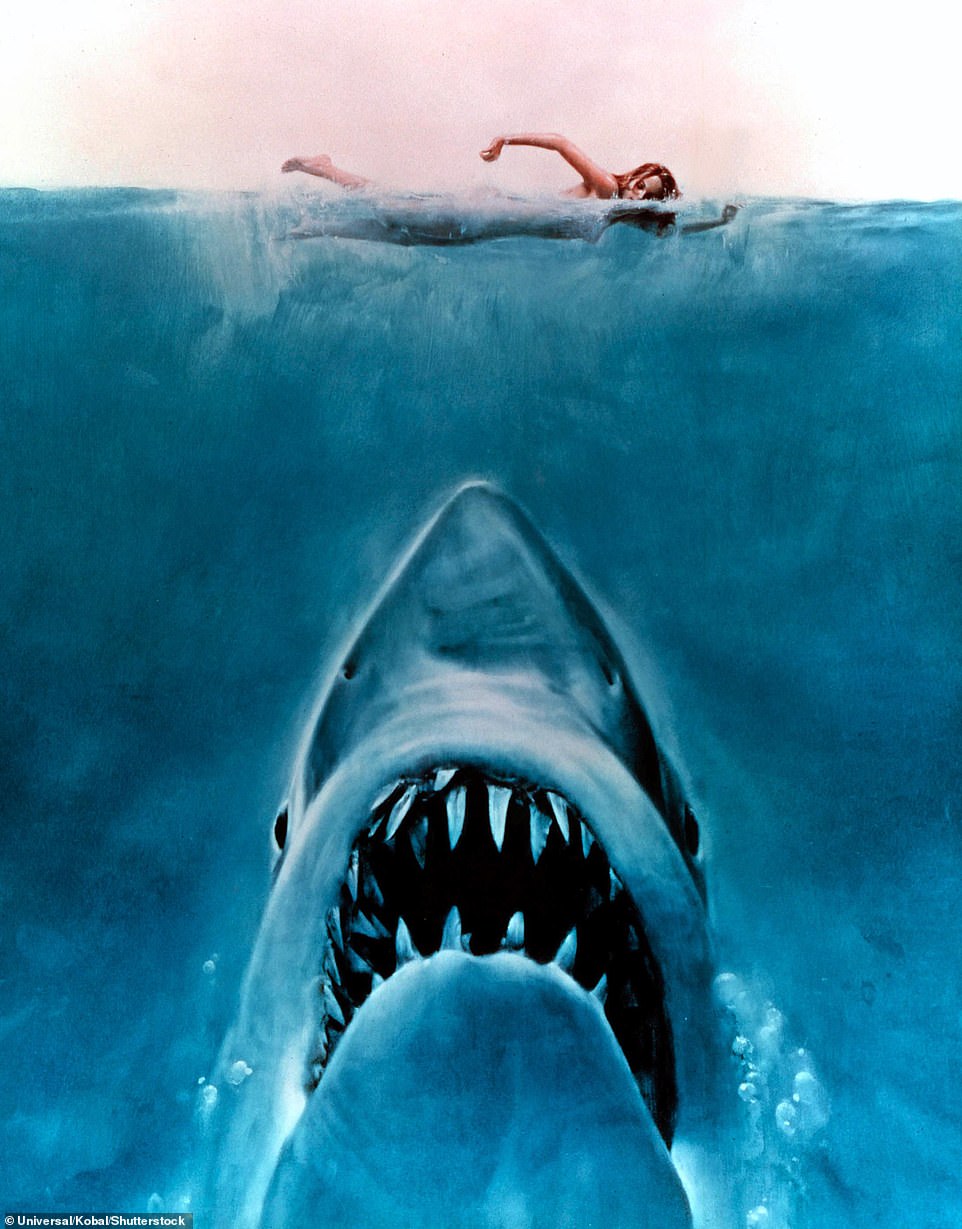 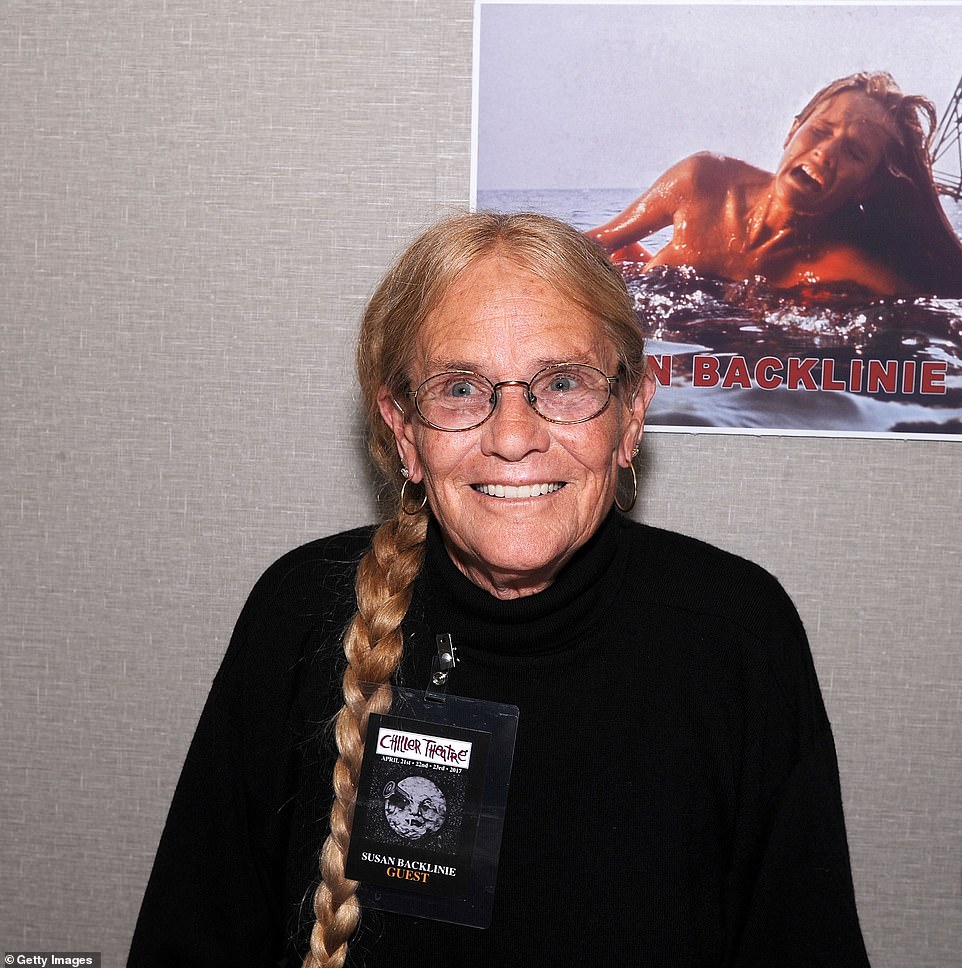 In the years following her film debut, Backlinie has made appearances at fan conventions and revealed she submitted a nude photo of herself to casting directors for her audition for the role

Ironically, Backlinie now spends her days on a houseboat that looks spookily similar to the vessel that was used to hunt down the great white shark off the coast of Amity Island, a fictional New York coastal town.

Prior to her appearance in Jaws, Backlinie worked as a stunt woman as well as an animal trainer. 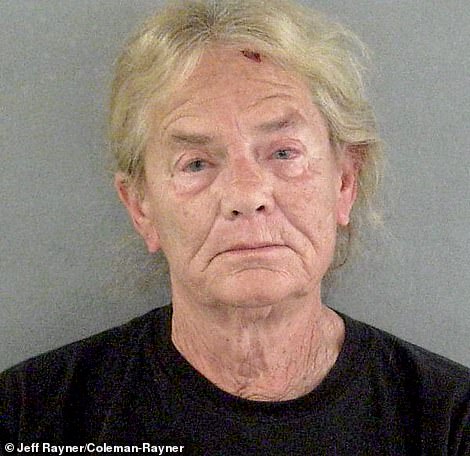 Backlinie has fallen on slightly rougher times in recent years, and was charged with a DUI in 2019 (pictured)

In another claim to fame, she also owned the same bear whose growls were used as the voice of Chewbacca in Star Wars.

Speaking at a fan convention held in Calgary, Canada in 2017, Backlinie recalled how she landed the part of Chrissie Watkins alongside Roy Schneider, Richard Dreyfuss, Robert Shaw and Ellen Brody in the famous Steven Spieberg movie.

She shared how she submitted a nude photo of herself in her application since she assumed the movie would call for her to strip down, yet to her relief that scenario didn’t turn out to be necessary.

‘I do about for our five [conventions] a year, it’s fun to go out and meet all the fans,’ she told the interviewer at the time.

They all have the same thing to say and the main thing they say all the time is: ‘You’ve kept me out of the water.’

Exclusive DailyMail.com photos showed Backlinie clad in a hoodie, shorts, and sneakers and walking with a cane while running errands on June 16 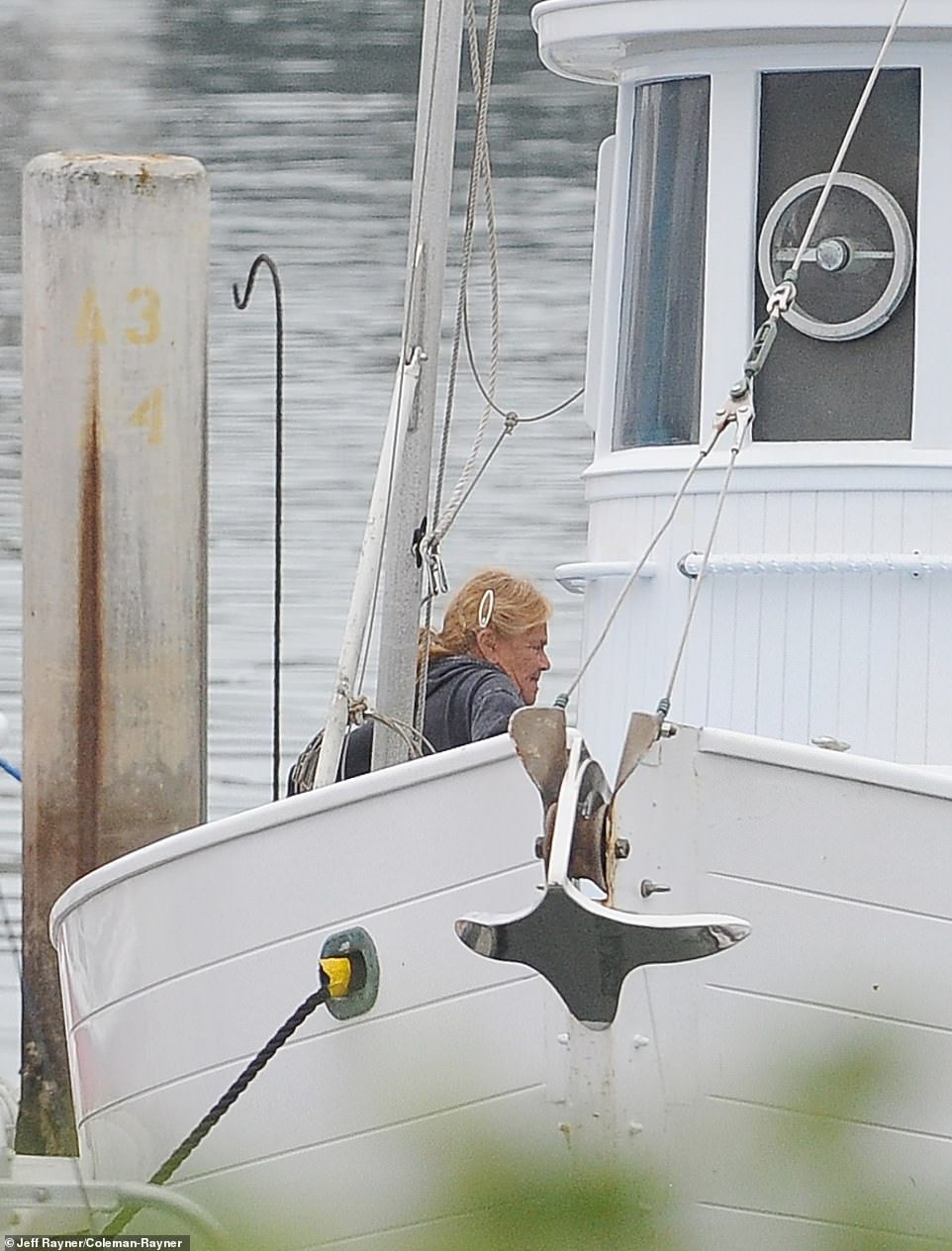 Ironically, Backlinie now spends her days on a houseboat that looks spookily similar to the vessel that was used to hunt down the great white shark in the film 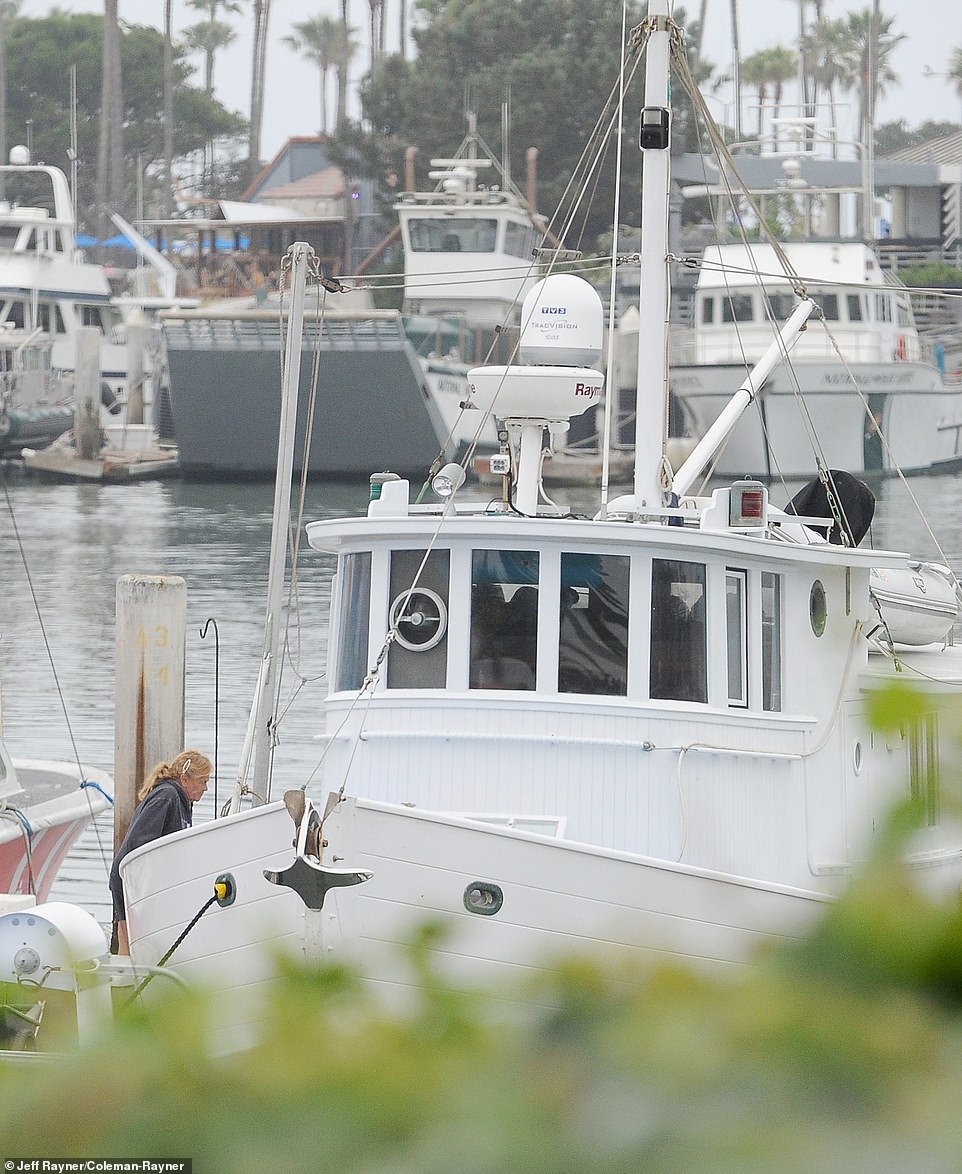 DailyMail.com can also reveal Backlinie is due to appear in court this November, after being arrested in August 2020 and charged with battery, according to public records

The 1975 release of the classic thriller is regarded by many as a watershed moment in film history.

It was the first major film shot on the ocean, and it went massively over budget, costing $9million with an original budget of $4million to the dismay of its producers who first envisaged it as a small picture.

To simulate the shark’s first strike, a night-time attack on the female skinny-dipper, cables attached to Backlinie’s legs were tugged from the beach, replicating the jerking motion of an actual attack.

Spielberg didn’t tell her when the first tug would come, so her shock reaction was genuine.

The film was also a troubled shoot, with sinking boats, wet cameras and an inexperienced director at the helm. 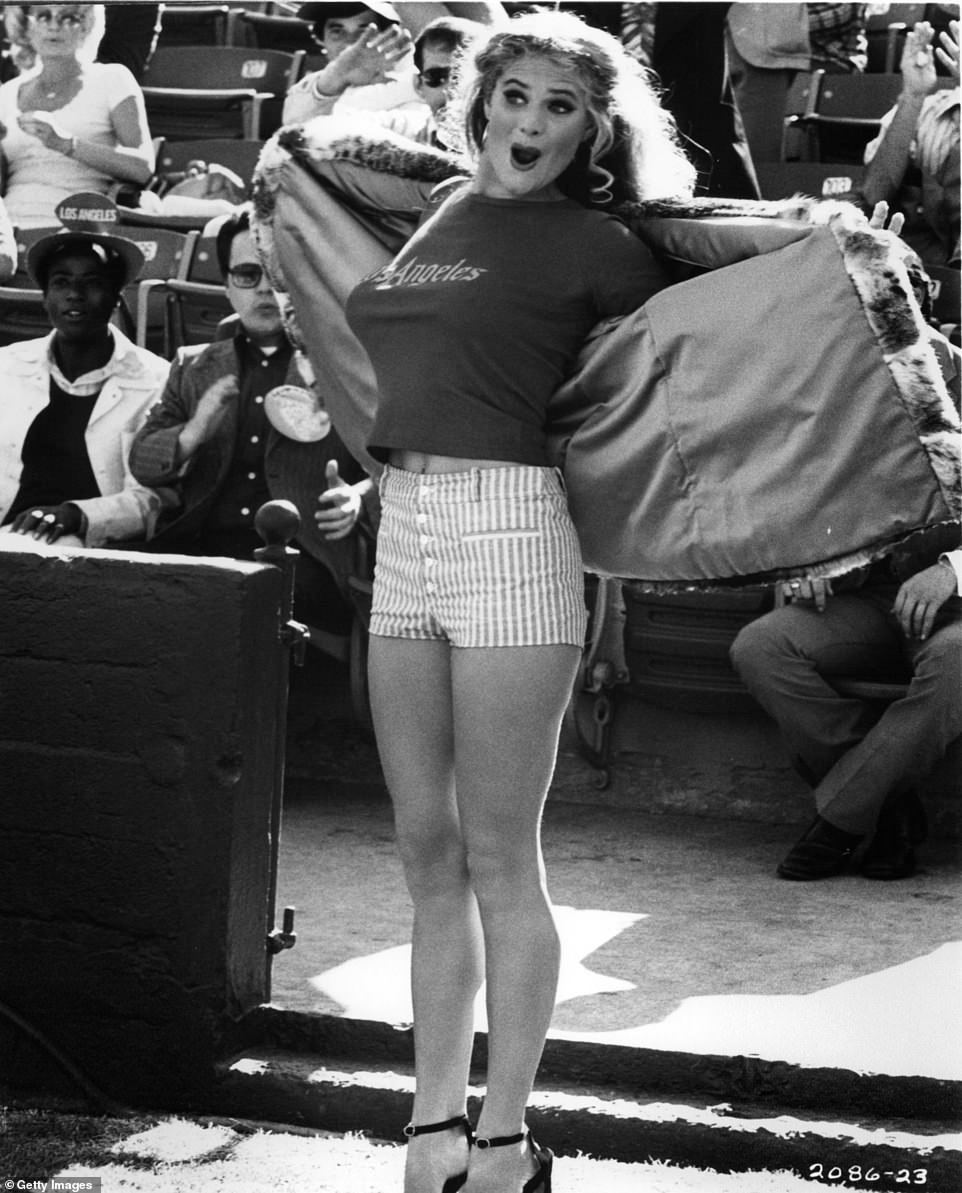 Susan Backlinie in a scene from the film ‘Two-Minute Warning’ in 1976. Prior to her appearance in Jaws, she worked as a stunt woman as well as an animal trainer 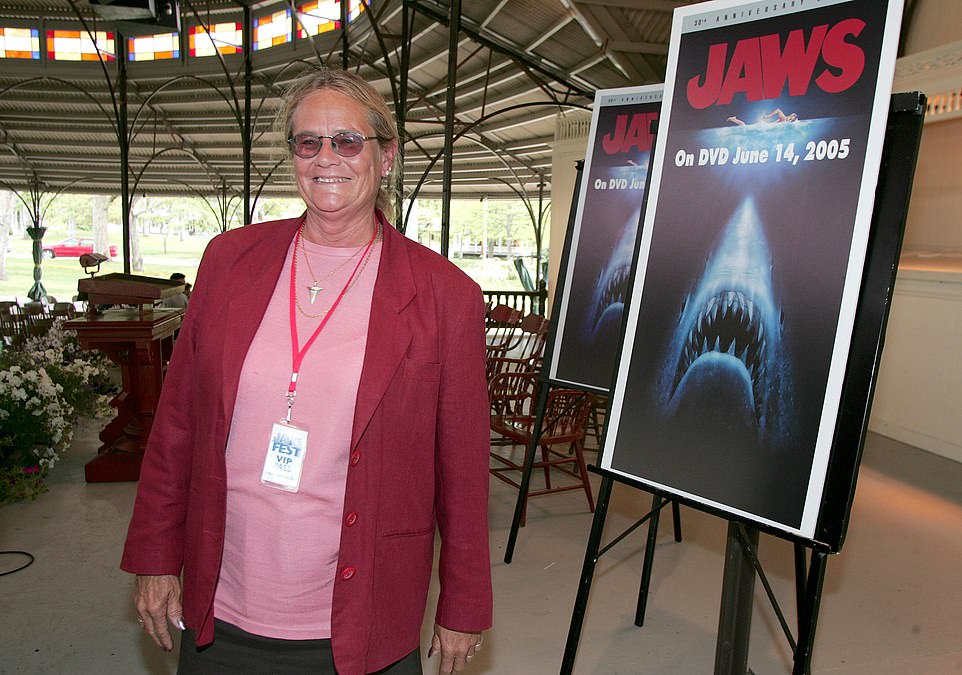 The actors were seasick much of the time and screenwriter Carl Gottlieb was nearly decapitated by a propeller.

Principal photography was meant to take 55 days but took 159, and the crew nicknamed the film Flaws.

Despite its problems, the film grossed an astonishing $7million-plus in its first weekend and ended with box-office takings of $124million – a record at the time – beating The Godfather. 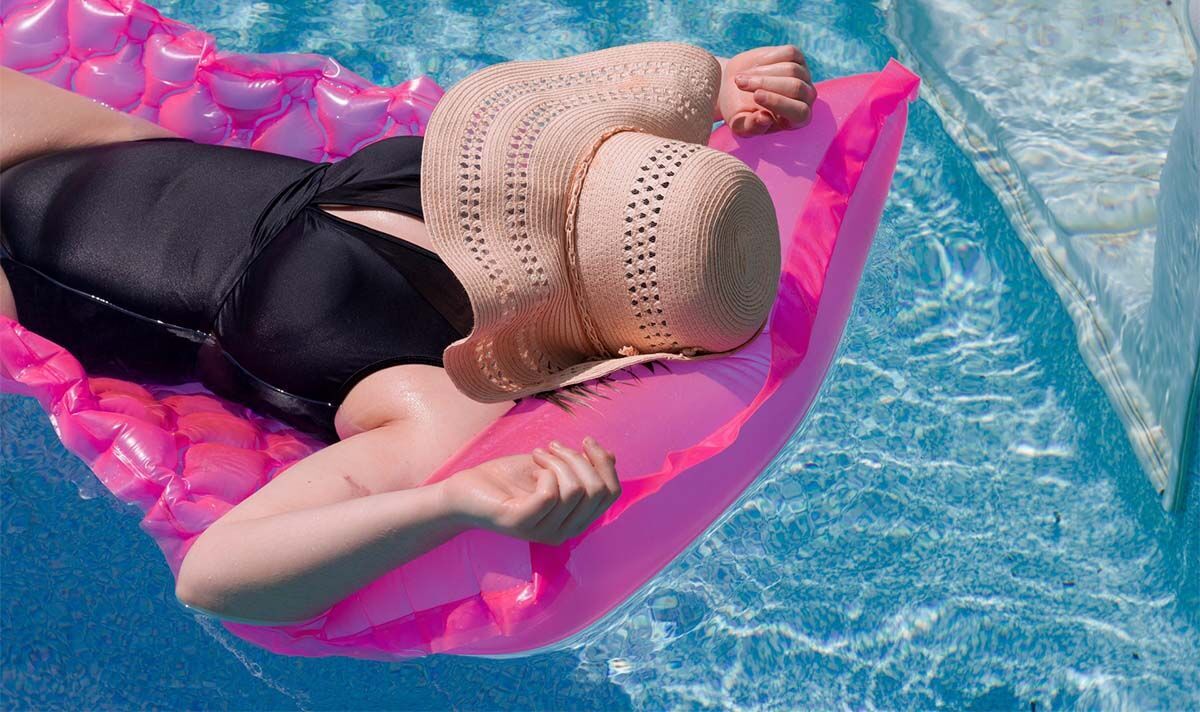 Man slams ‘entitled’ neighbours who demand to use his pool 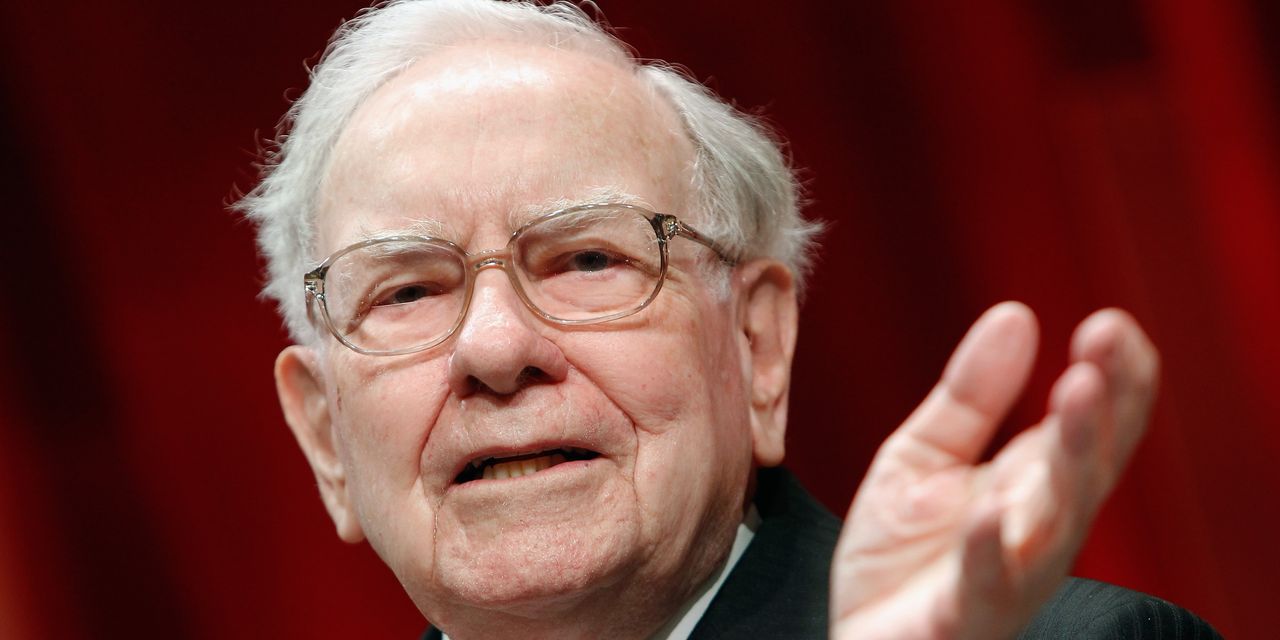