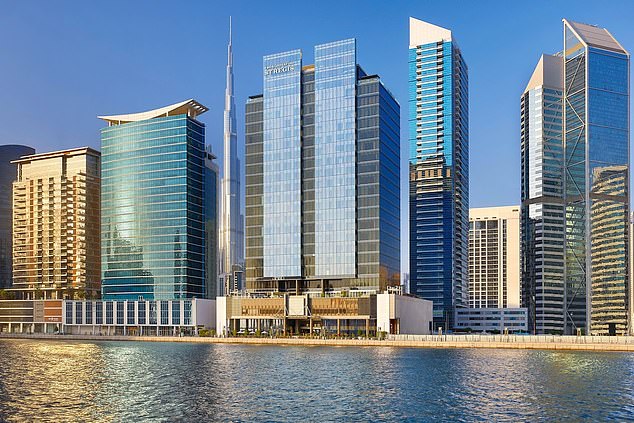 
Top officials in Afghanistan spent millions on luxury homes in the US, Dubai, United Arab Emirates and elsewhere that they later fled to after President Joe Biden pulled US forces out of the country and the Taliban quickly took over.

As hundreds of thousands of Afghans – and Afghan refugees – struggle to situate themselves after Kabul’s fall last August, The Wall Street Journal revealed how high-ranking officials of the impoverished country escaped to opulent properties.

The newspaper reviewed property records in the US and abroad, reporting that at least two officials now live in expensive areas in Dubai – and one purchasing a total of ten properties in California while he was in office.

Afghanistan’s former finance minister Eklil Hakimi, who bought the homes in California, then transferred eight of those homes in the Golden State to a company owned by his wife.

According to the WSJ, minister of economy Mustafa Mastoor and Governor of the  Balkh province Atta Mohammad Noor each own properties on the Dubai Marina and in the City of Gold’s lavish ‘Palm Tree’ area, respectively.

After fleeing Afghanistan in August, President Ashraf Ghani stayed at the world-renowned five-star St. Regis Hotel in Abu Dhabi with his family.

Meanwhile, his ally and National Security Adviser Hamdullah Mohib’s stay at the luxe Shangri-La Hotel was covered by the United Arab Emirates on humanitarian grounds.

Top government officials in Afghanistan spent millions in luxury homes in the US and Dubai that they later resorted to after fleeing the besieged country. After fleeing Afghanistan in August, President Ashraf Ghani stayed at the world-renowned five-star St. Regis Hotel (pictured)  in Abu Dhabi with his family 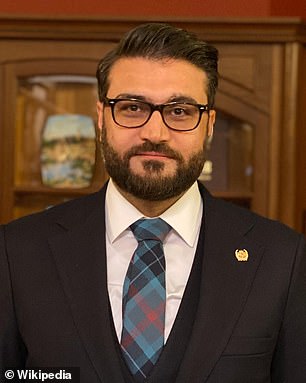 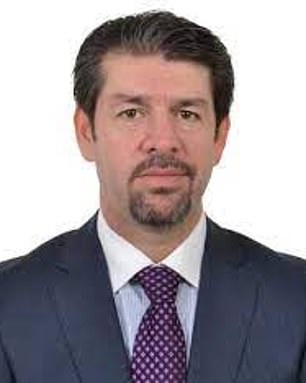 National Security Adviser Hamdullah Mohib’s (left) stay at the Shangri-La Hotel was covered by the United Arab Emirates on humanitarian grounds. Minister of economy Mustafa Mastoof owns a condo on the Dubai Marina that he purchased as an investment before he was in office, he told the Journal. 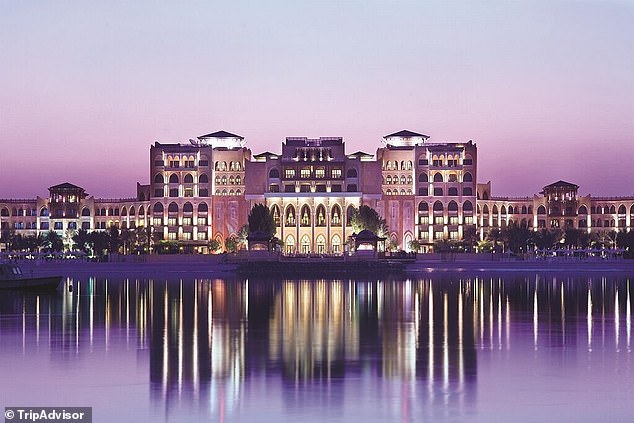 According to The Wall Street Journal, Mohib was worried about his American pregnant wife’s safety and moved his family to the Shangri-La Hotel in Abu Dhab 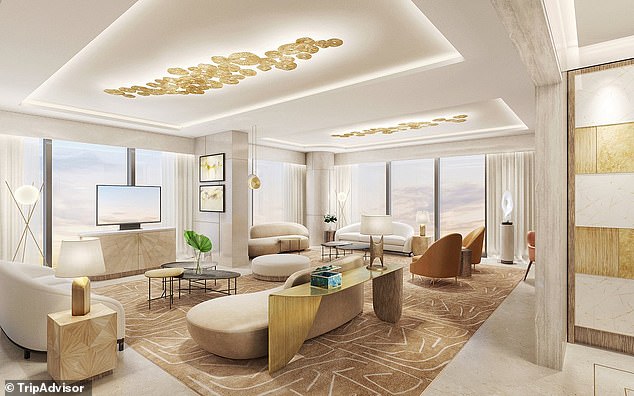 Many Afghan officials have fled the nation over the past year, citing fears of retaliation from the Taliban.

But their escape to foreign countries is a stark contrast to the arduous reality of thousands of Afghan refugees who did not flee their home country in private jets – but by embarking on days-long journeys to cross its borders on foot.

Unlike their politician compatriots, refugees fleeing the Taliban regiment were not welcomed with open arms by countries willing to pay for their stay at five-star hotels – as the United Arab Emirates did with several Afghan top government officials.

And accusations have piled up of top officials looting government coffers as they fled – including President Ghani, who has long denied such claims.

“Reports indicate that President Ghani in fact had so much looted money with him when he fled Afghanistan that not all of it would fit in his helicopter, and that he was forced to leave money lying on the tarmac,” Republican Reps. James Comer, R-KY, and Glenn Grothman, R-WI, wrote in a letter to Secretary of State Antony Blinken last year demanding an investigation into the incident.

Hamdullah Mohib, Ghani’s national-security adviser, also fled Afghanistan with the president on August 15 as the Taliban closed in Kabul.

According to The Wall Street Journal, Mohib was worried about his American pregnant wife’s safety and moved his family to the Shangri-La Hotel in Abu Dhab.

The outlet reported that his stay was paid for by the UAE on humanitarian grounds.

Mohib and his family later moved to a four-bedroom home in Florida owned by his mother-in-law. He told the Journal that he doesn’t own any properties in the US or elsewhere.

While staying at the villa in the UAE, Mohib told the Journal:  ‘Since the fall of Kabul, a lot of rumors are flying around. I am personally disturbed by it … I made financial sacrifices to work for the government.’ 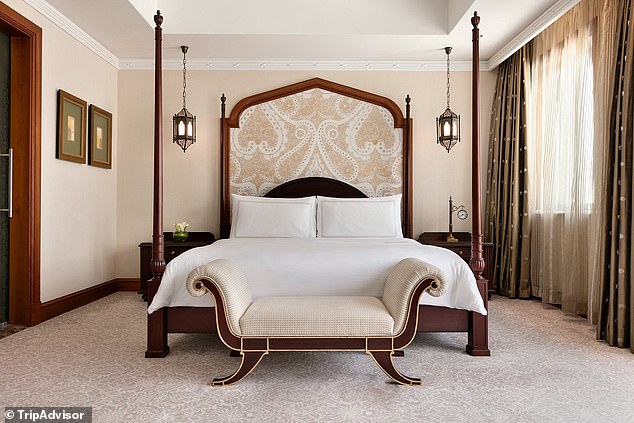 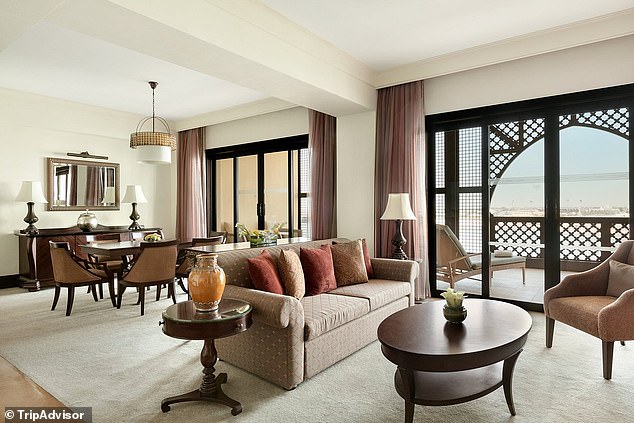 The stay at the luxurious hotel was covered by the UAE 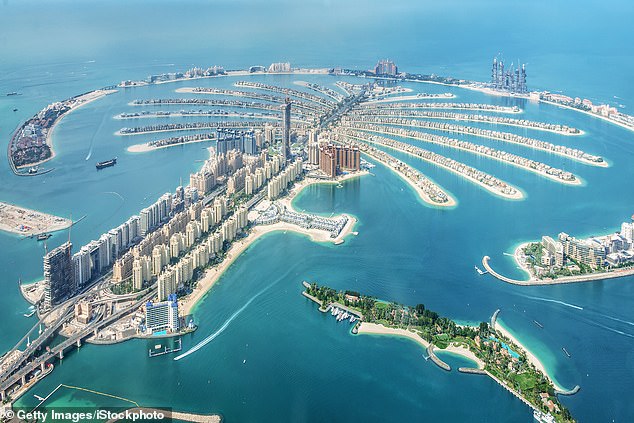 The Governor of Balkh province, Atta Mohammad Noor, also resides in Dubai. Noor lives in the exclusive ‘The Palm’ area. The Journal reported that it was his sole property outside of Afghanistan

The besieged country’s last finance minister Khalid Payenda, owns two homes in DC, each worth more than $1million, which were bought with cash.

Payenda told the Journal that he had to work as an Uber driver immediately after arriving in the US and that owning the two homes did not spare him from ‘running into cash-flow problems.’

Meanwhile, once-finance minister Eklil Hakimi has purchased a total of ten homes in California with a combined worth of $10million during the time he was in office from 2015 to 2018, the Journal reported.

Eight of those properties were transferred to his wife Sultana Hakimi’s company, Zala Group.

Among the properties owned by the Hakimis are a $2.5million home in the Laguna Niguel community and a $1.1 million beachfront South Cove condo.

Minister of economy Mustafa Mastoof owns a condo on the Dubai Marina that he purchased as an investment before he was in office, he told the Journal.

He has lived in Istanbul since months before Kabull’s fall.

The Governor of Balkh province, Atta Mohammad Noor, also resides in Dubai. Noor lives in the exclusive ‘The Palm’ area. The Journal reported that it was his sole property outside of Afghanistan. 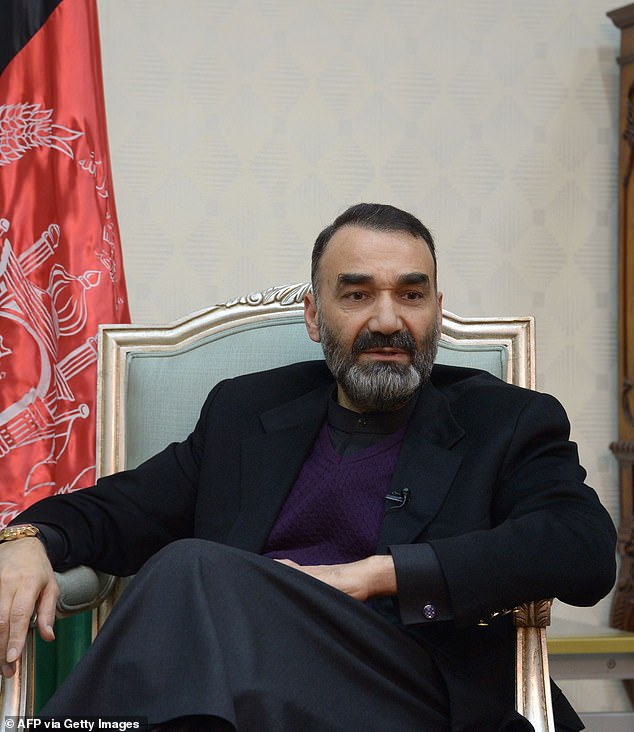 This photograph taken on January 22, 2018 shows Atta Mohammad Noor, the former governor of the northern province of Balkh

Last week, a US government watchdog’s concluded that Ghani almost certainly did not flee Kabul as it fell to the Taliban with millions of dollars in stolen cash.

The Special Inspector General for Afghanistan Reconstruction (SIGAR) report is an interim document, as the office is still awaiting answers to questions sent to Ghani.

First reported on by Politico, the report interviewed witnesses as well as officials who were in the helicopter convoy with Ghani as they hastily fled the Presidential Palace in Kabul while the Taliban marched into the capital on August 15.

In subsequent days, multiple reports suggested that Ghani and the other officials took up to $169 million in Afghan government money with them.

‘Although SIGAR found that some cash was taken from the grounds of the palace and loaded onto these helicopters, evidence indicates that this number did not exceed $1 million and may have been closer in value to $500,000,’ the report states.

It based that assessment heavily on interviews with the witnesses and officials involved, all of whom said they saw no signs of such large amounts of cash on the helicopters already overloaded with people fleeing for their lives.

‘$169 million in hundred dollar bills, stacked end to end, would form a block 7.5 feet (2.3 meters) long, 3 feet wide, and 3 feet tall… This block would have weighed 3,722 pounds, or nearly two tons,’ SIGAR noted, adding that witnesses reported ‘minimal luggage’ on the helicopters, which had no cargo holds. 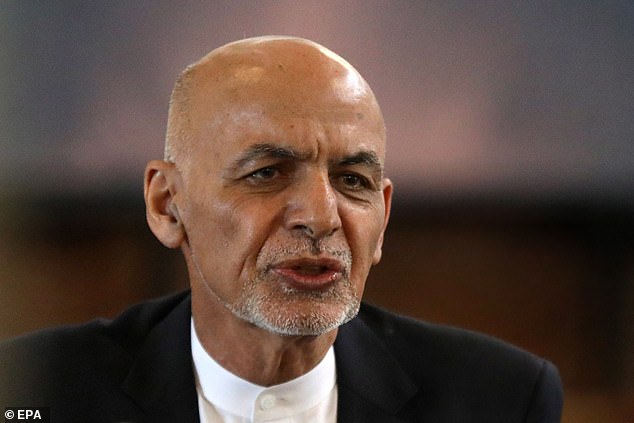 Last week, a US government watchdog’s concluded that ormer Ghani almost certainly did not flee Kabul as it fell to the Taliban with millions of dollars in stolen cash

‘If true, this puts the total amount of cash on board the three helicopters at approximately $500,000, with $440,000 belonging to the Afghan government,’ the report said.

‘SIGAR also identified suspicious circumstances in which approximately $5 million in cash was allegedly left behind at the presidential palace,’ the report added.

It was not clear where the money came from or what it was for, ‘but it was supposedly divided by members of the Presidential Protective Service after the helicopters departed but before the Taliban captured the palace,’ it said.

The report said there appears to have been ‘ample opportunity and effort to plunder Afghan government coffers.’

But, the watchdog added, it ‘does not have sufficient evidence to determine with certainty whether hundreds of millions of dollars were removed from the country by Afghan officials as the government collapsed or whether any stolen money was provided by the United States.’ 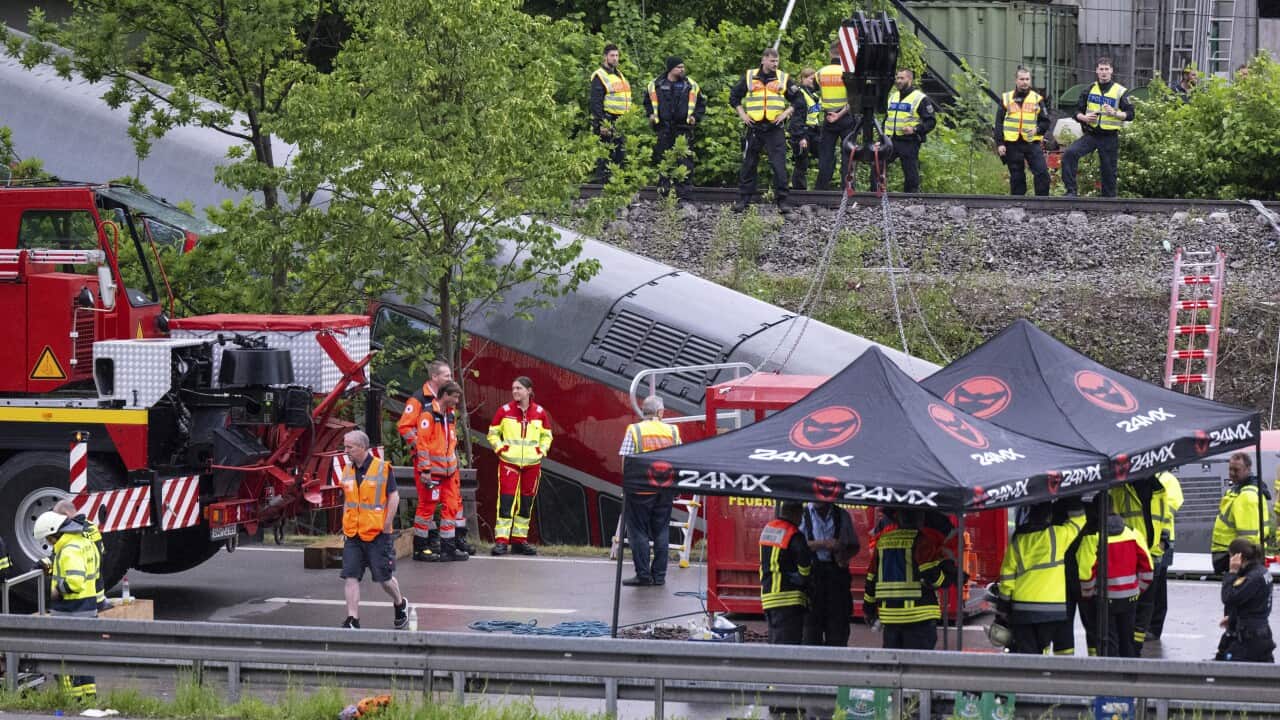 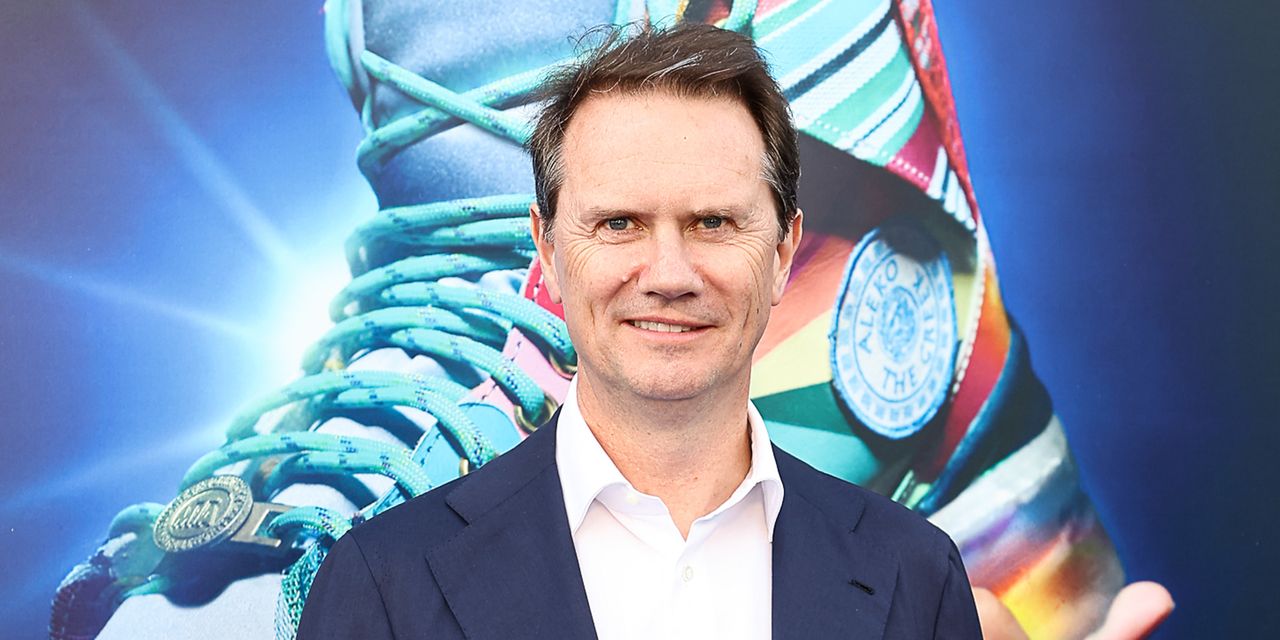