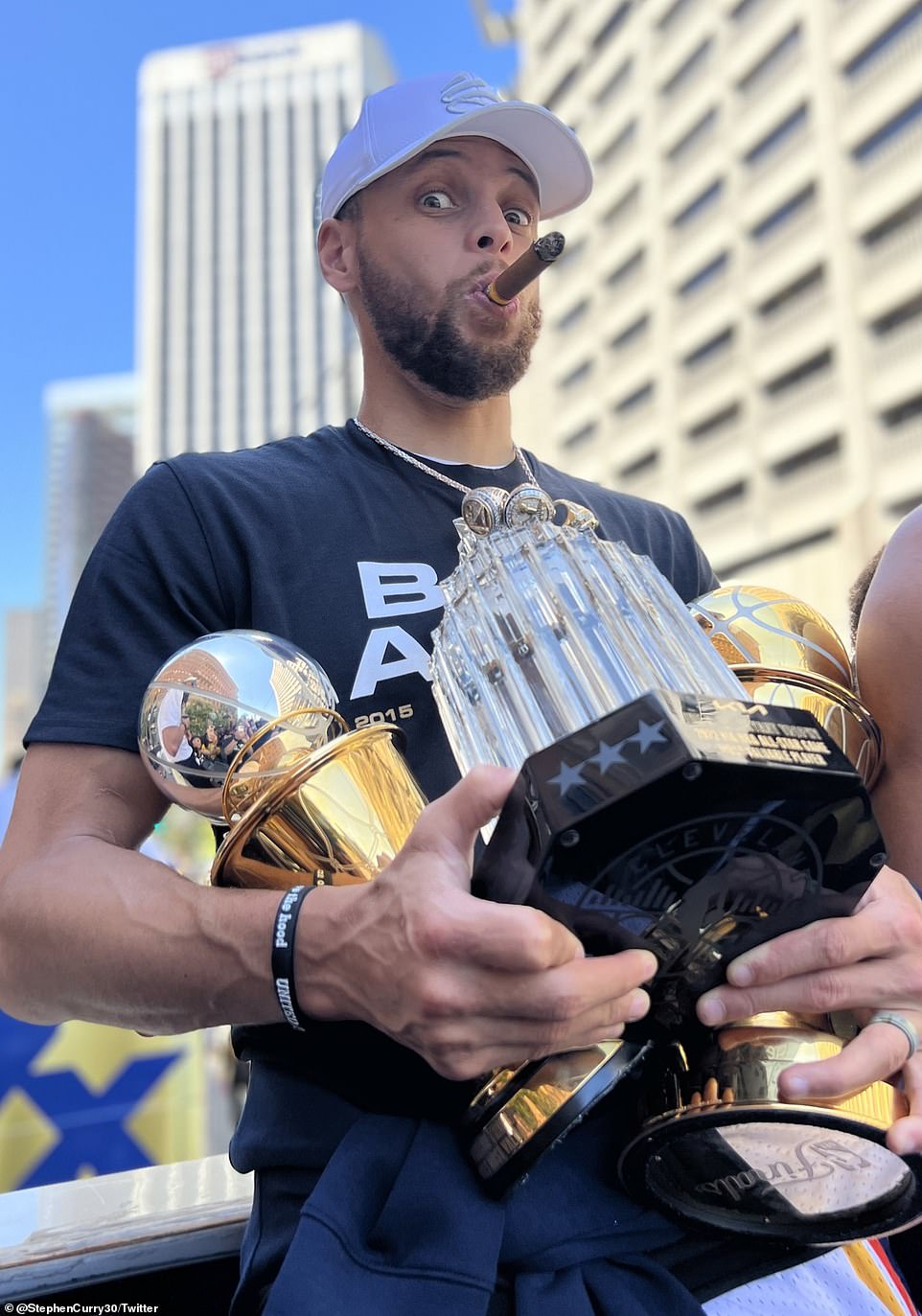 
The Golden State Warriors are celebrating their fourth NBA title in the last eight years, only this time, they’re doing it in San Francisco.

Monday’s parade, commemorating the Warriors’ six-game victory over the Boston Celtics in the NBA Finals, goes through one the city’s major arteries, Market Street, where fans were seen lined up, eating hot dogs and smoking marijuana hours beforehand, according to The San Francisco Chronicle. (Recreational marijuana has been legal in California since 2016)

The club’s three most recent championship parades were held in Oakland, where the team played exclusively from 1971 until 2019, when the Warriors moved into San Francisco’s Chase Center.

The festivities did not get off to a good start for Warriors star Klay Thompson, who lost his Warriors championship hat in San Francisco Bay as he drove to the parade on his speed boat. The 32-year-old was seen wearing a captains hat afterwards at a pre-parade rally.

‘I underestimated the wind gusts,’ Thompson said later on social media. ‘Took it right off my head.’

Draymond Green, another of the Warriors’ four-time champions, ignited the crowd at the pre-parade rally with a few choice words: ‘Thank you, and as always, f*** everybody else; I love y’all.’

From there, Warriors teammates and their loved ones boarded a convoy of double-decker, team-colored buses for the leisurely journey through San Francisco.

SCROLL DOWN FOR VIDEO 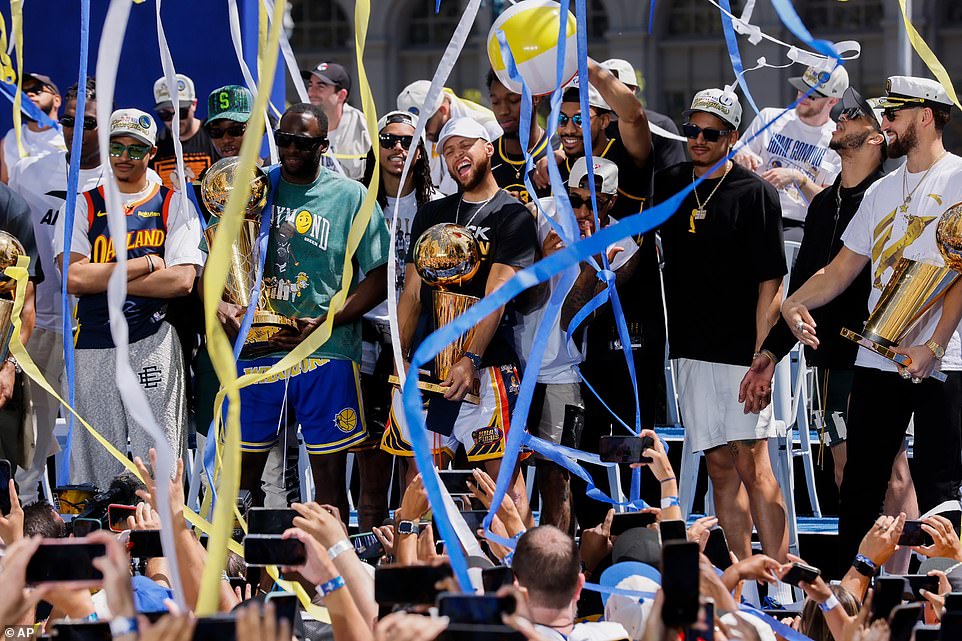 Stephen Curry, center, and the Golden State Warriors celebrate the NBA championship during a parade in San Francisco 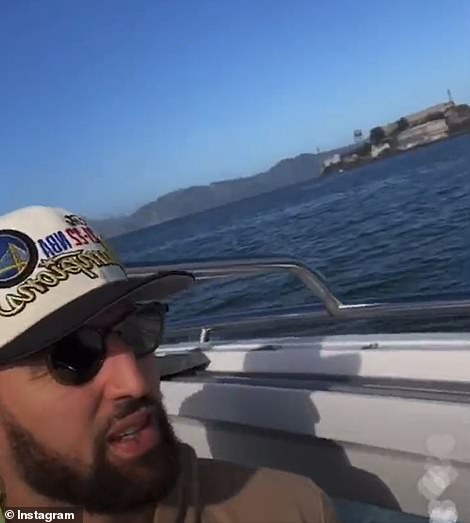 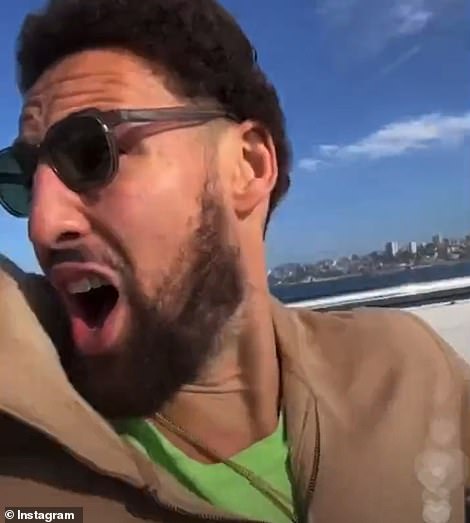 The festivities did not get off to a good start for Warriors star Klay Thompson, who lost his Warriors championship hat in San Francisco Bay as he drove to the parade on his speed boat. The 32-year-old was seen wearing a captains hat afterwards at a pre-parade rally. (Left) Thompson is seen driving by Alcatraz Island. (Right), he’s seen losing his Warriors hat 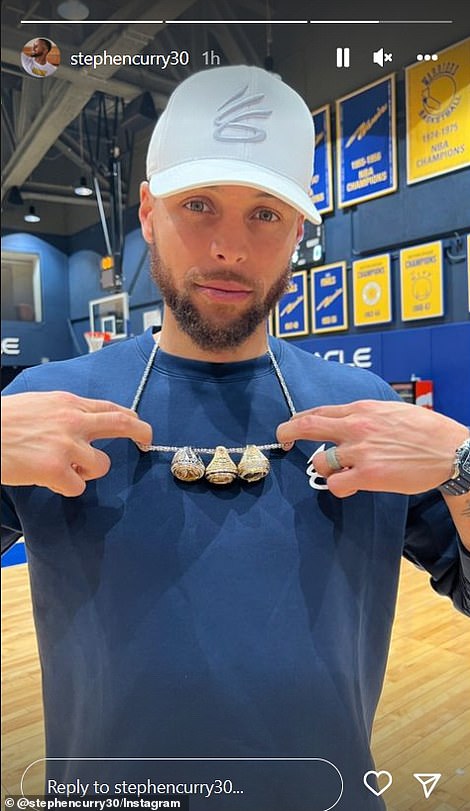 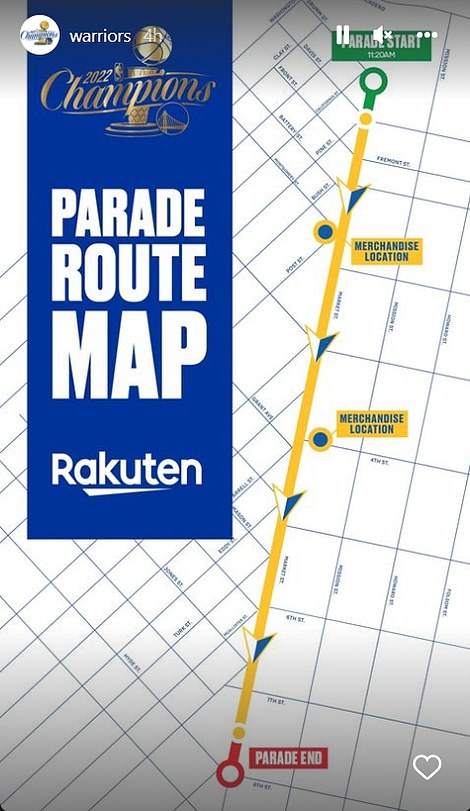 The goal was enormous: Return to the NBA’s mountaintop.

And now with that monumental task complete, the NBA champion Golden State Warriors already have a new target: staying up there for a while.

The victory cigars hadn’t been extinguished after the title-clinching win in Boston, the last celebratory bottles of Moët & Chandon hadn’t been emptied, and the topic — can the Warriors win it again next season? — was already coming up. They have been installed by FanDuel Sportsbook as the favorites for the 2023 NBA title, and with Finals MVP Stephen Curry, Klay Thompson and Draymond Green all back it would be foolish to think that their chance at a fifth championship in nine years isn’t very real.

‘It still has not been proven, that when we’re whole, that anybody can stop it,’ Green said.

That’s true, and that’s why it makes sense for the Warriors to carry the burden of being favorites into next season. They know what it takes; they have as many championships in the last eight seasons — four — as the rest of the league combined. The last run that was better than this was put together by Michael Jordan and the Chicago Bulls, winning six in an eight-year span of the 1990’s.

Warriors coach Steve Kerr — now a nine-time champion — played for the Bulls for some of that run, and has led Golden State to all four of these titles.

‘They are all unique. They are all special,’ Kerr said. ‘I think this one may have been the most unlikely just from the standpoint of where we’ve been the last couple years. A lot of unknowns.’ 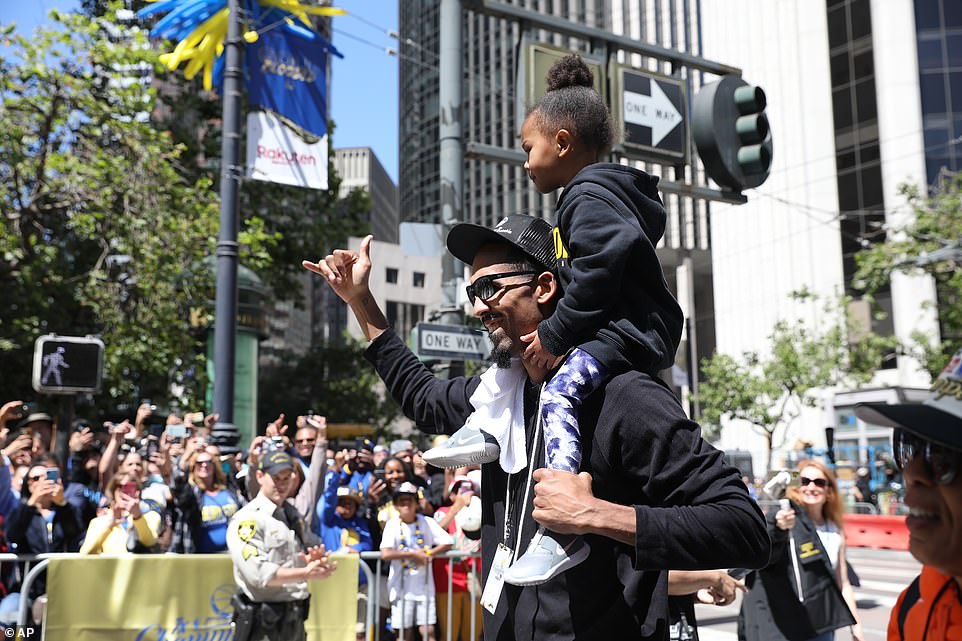 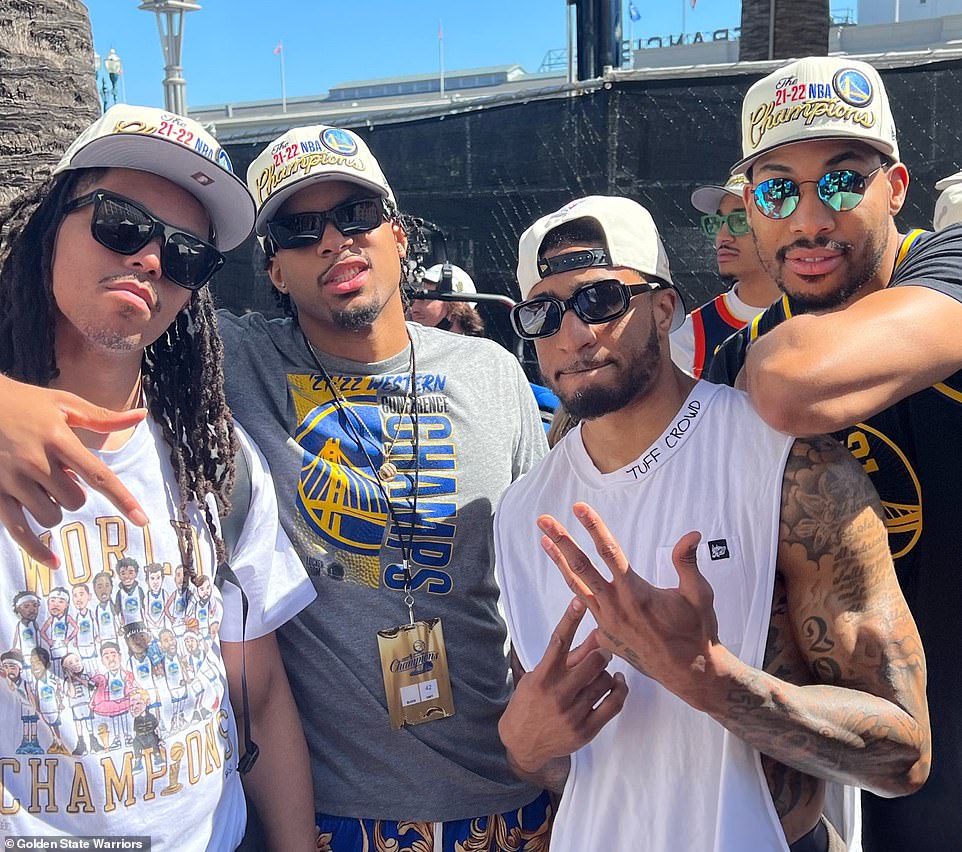 Indeed, there were questions.

The Warriors answered them all. No, the core wasn’t too old. Yes, Thompson would come back from more than 900 days on the sidelines with injuries. And absolutely, Curry can still be unstoppable in the biggest moments.

They took that core and fortified it with a new group of talent. Among those on that list: 27-year-old Andrew Wiggins, the 2014 No. 1 pick who has come into his own and was nothing less than a star in the NBA Finals; Jordan Poole, who turns 23 this weekend and will celebrate as a champion who has blossomed after facing off against Curry in practice all the time; and Jonathan Kuminga, the 19-year-old who got into 86 games and is raved about by teammates.

‘And we ain’t done,’ Thompson said early Friday while appearing on Green’s podcast, The Draymond Green Show. ‘That’s the beautiful thing about it. We got these young bucks behind us and we got the same squad coming back? That’s scary for the NBA.’

Green concurred. ‘It is very scary,’ he said.

They earned that championship moment, after going through an NBA Finals loss in 2019 to Toronto and then two seasons with a combined 54-83 record, a million miles away from being the team that the Warriors demand they be.

The Warriors had the NBA’s worst record in 2019-20 in large part because of roster turnover — Kevin Durant, who was out that whole season while recovering from Achilles surgery, had just left for Brooklyn — and injuries. Thompson didn’t play that season because of a knee injury suffered in the final game of the 2019 finals. Curry played in just five games. It was the reset year.

The bounceback was supposed to be last season, but Thompson had to sit out again, this time because of an Achilles tear of his own. The Warriors lost in the play-in tournament. But seeds were planted for something great; how great, even Golden State wasn’t sure, but Curry insisted something was brewing.

Thompson came back in January and the Golden State goal was clear — win it all, again. The Warriors have played 24 playoff series with Curry, Thompson and Green together in the last eight years. They’ve won 22 of them; the exceptions being the 2016 and 2019 finals, when injuries took a toll.

This time, there was no stopping the Dubs.

‘I saw it in the beginning of season,’ Thompson said. ‘People called me crazy. I said ‘Championship or bust’ because I saw how we came out of the gate, 18-2. And playing just that Warriors brand of basketball that made us so successful, and then knowing I was going to be inserted in that, I knew we had a chance to do something special, and here we are. It’s so incredible. Wow.’

Training camp is only three months away so the revving-up process for next season will start sooner rather than later. The Warriors know they’ll be right back in the center of the NBA spotlight, playing tons of national TV games, getting every opponent’s best shot, drawing massive attention everywhere they go again.

It’ll be just like old times. For many Warriors, it’ll be a first. For the old guard, the core of four-time champions like Curry, Green and Thompson — plus Andre Iguodala, if he decides to postpone retirement for one more year — it’ll be familiar territory.

‘I think this one is definitely different because of the three years of baggage we carried coming out of that Game 6 in 2019,’ Curry said. ‘I can say it now: I don’t know how many teams could carry that as long as we have with the expectations of comparing us now to teams of past and make it to the mountaintop again.’

And next year, they’ll try to do it again. 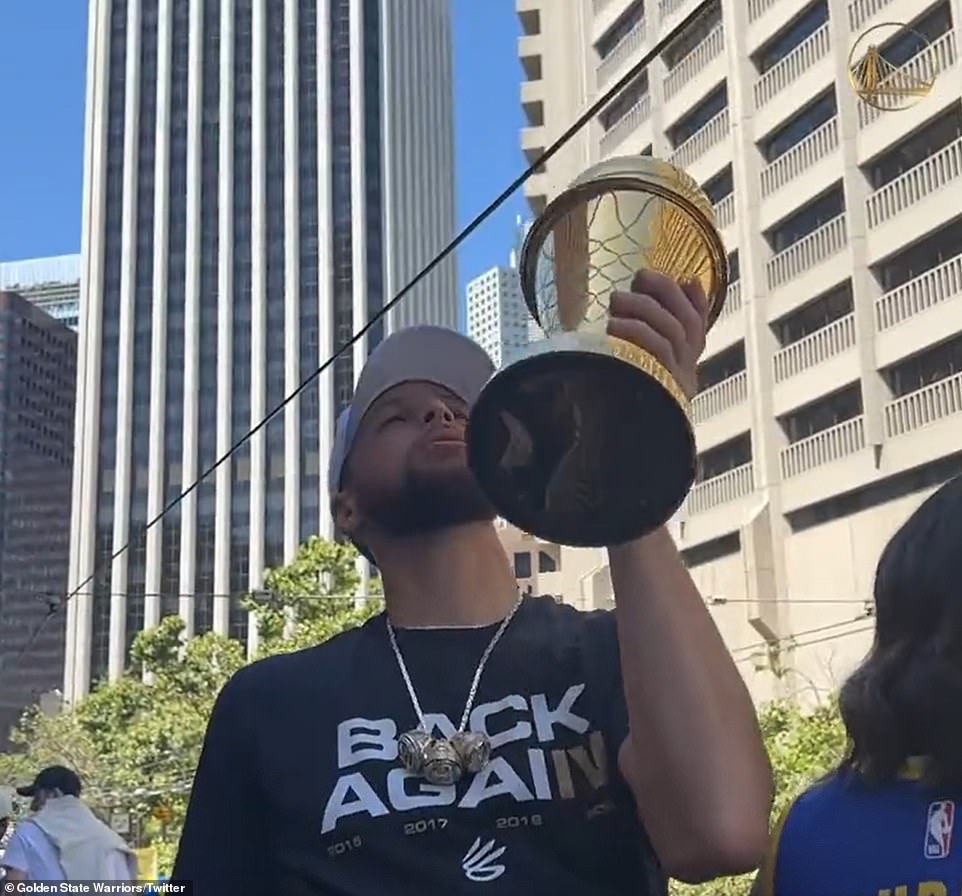 ‘Beacon masters’ will light the U.K. on fire for queen’s Platinum Jubilee 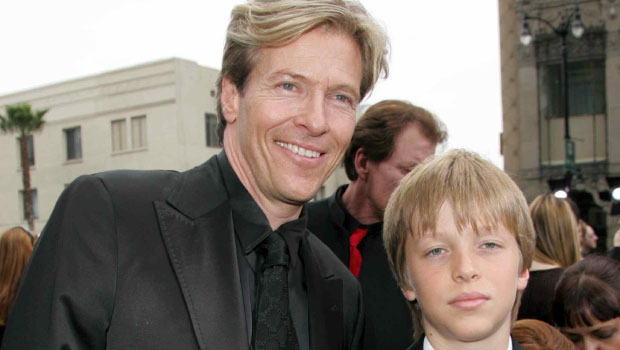