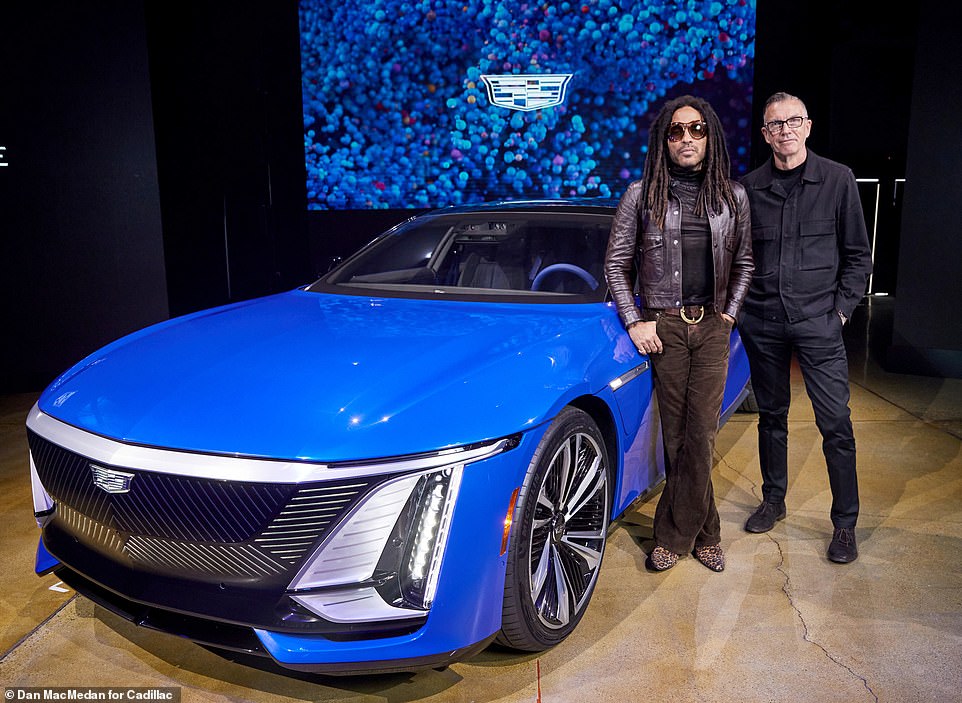 
General Motors unveiled a ‘spaceship-looking’ 2024 Celestiq, which is the firm’s $300,000-plus flagship electric vehicle that is being touted as its most audacious new model since the 1930 Cadillac Sixteen.

The futuristic Celestiq electric vehicle, which was unveiled in Los Angeles on Tuesday night, is not a traditional sedan like its pre-World War II predecessor. Instead, it is a long, four-door fastback – and GM’s design boss Mike Simcoe has promised ‘there will be nothing like it on the road.’

The vehicle plays into Cadillac’s ‘legacy of custom coachbuilding’ by allowing buyers to ‘individually tailor’ minute details of the car’s design.

Just two of the Celestiq cars will be built by hand a day in a new plant in Warren, Michigan, which means there will only be only 500 a year and to get one one in 2024 any prospective buyers will need to get on a waitlist now.

Singer Lenny Kravitz joined Simcoe to pull the wrapping off an electric blue Celestiq, which was designed personally by the musician who chose the electric blue colored exterior and different hues for each interior lighting zone.

‘Cadillac was the first luxury vehicle I knew about,’ Kravitz said during the event.

‘My grandfather drove Cadillacs exclusively. This was in Bed-Stuy Brooklyn, New York.’

Kravitz continued to explain how for his grandfather, born on an island in the Bahamas, owning a Cadillac was a marker of success and prestige.

GM was joined by singer Lenny Kravitz in the unveiling of the new 2024 Celestiq that starts at $300,000. The blue vehicle presented at the Monday event was also personalized by the musician 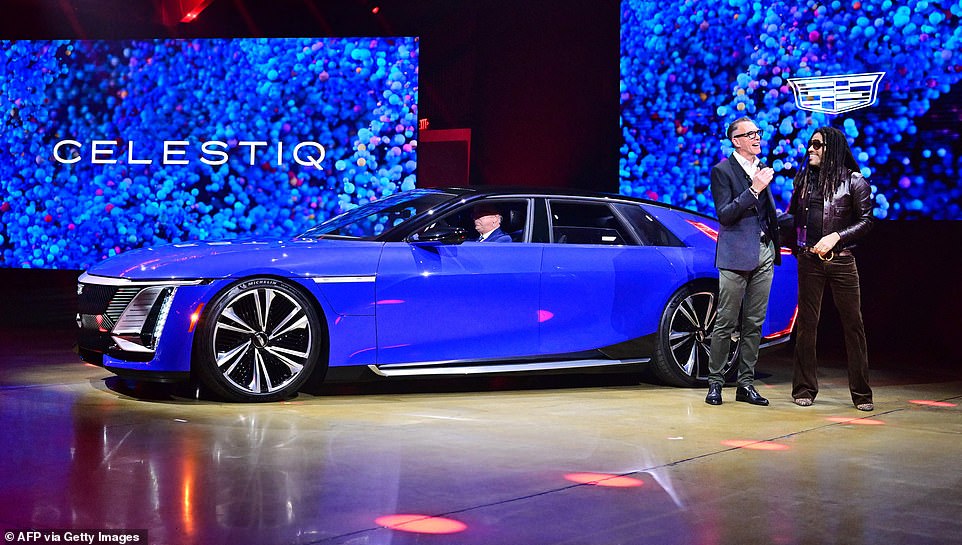 The vehicle can be personalized by buyers who can choose from more than 200 exterior colors that are hand painted on the vehicle. Customers can also have their vehicle hand-finished aluminum trim engraved with virtually any pattern throughout the Celestiq 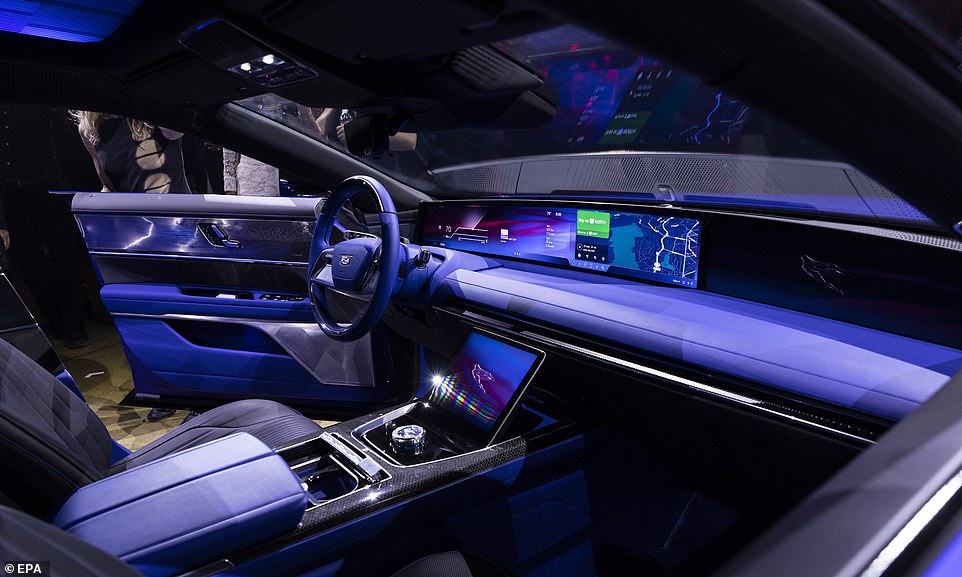 The entire color can also be customized, as Kravitz chose blue hues to match the exterior. Inside the vehicle is a 55-inch touchscreen display that provides the driver with information and also an area on the right for the passenger

The Celestiq in numbers

Estimated 600 horsepower and 640 pound-feet of torque

A 55-inch curved display in the front

Two 12.9-inch touchscreen displays for the back passengers to use

The Celestiq is constructed using 3D printing, which provides the personalization for buyers who can choose from more than 200 exterior colors that are hand painted on the vehicle.

Customers can also have their vehicle hand-finished aluminum trim engraved with virtually any pattern throughout the Celestiq – this means a personal monogram can be added to the exterior, Detroit Free Press reports.

Unlike the 16-cylinder Sixteen roadster that was launched just months after the 1929 crash, the 2024 Celestiq has no monster gasoline engine under its long hood.

Instead, it boasts twin electric motors producing 600 horsepower and a 111-kilowatt-hour battery pack shared with GM’s Hummer EV, which provides a driving range of 300 miles.

The vehicle is also ensuring it becomes the way of the future, as there are buttons to operate doors – it seems door handles are now a thing of the past.

The key fob, however, activates the driver’s door as they approach the vehicle and it closes once a foot reaches the brake pedal. And the vehicle will automatically start when the driver’s seat belt is locked in place.

Inside the Celestiq are displays, sensors, heating features and LED lights that provides all the conveniences necessary for all riders while they cruise through the streets.

In the front of the car sits a large 55-inch touchscreen display that provides details for the driver, along with a section for the passenger to watch videos.

And Google is built into the system for navigation, music and personal assistance.

There are a pair of 12.6-inch screens on the rear of the front seats for those riding in the back. 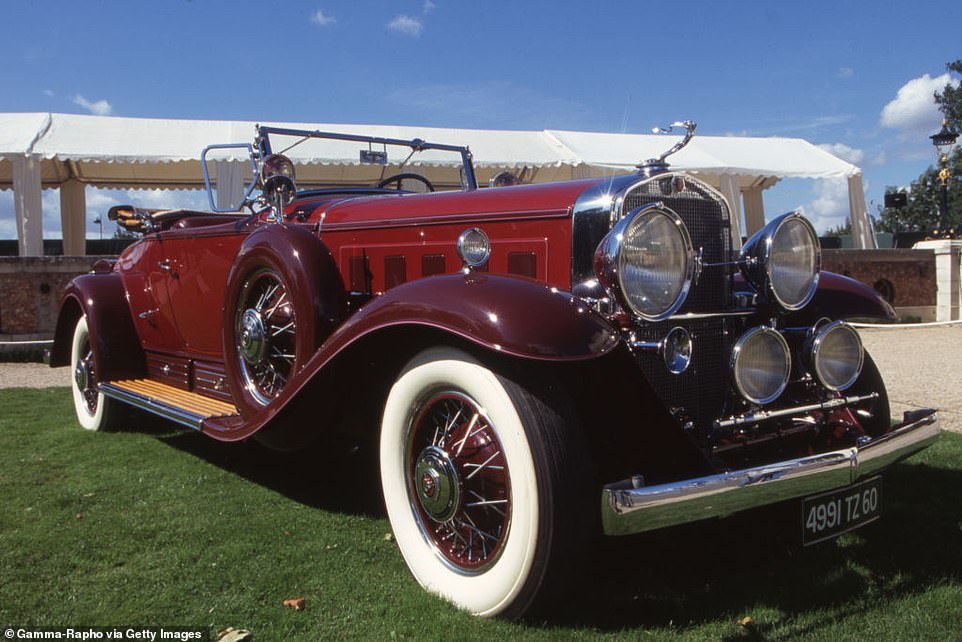 The Celestiq is being touted as its most audacious new model since the 1930 Cadillac Sixteen (pictured), which could be ordered in several body styles, including roadster, coupe, sedan and limousine 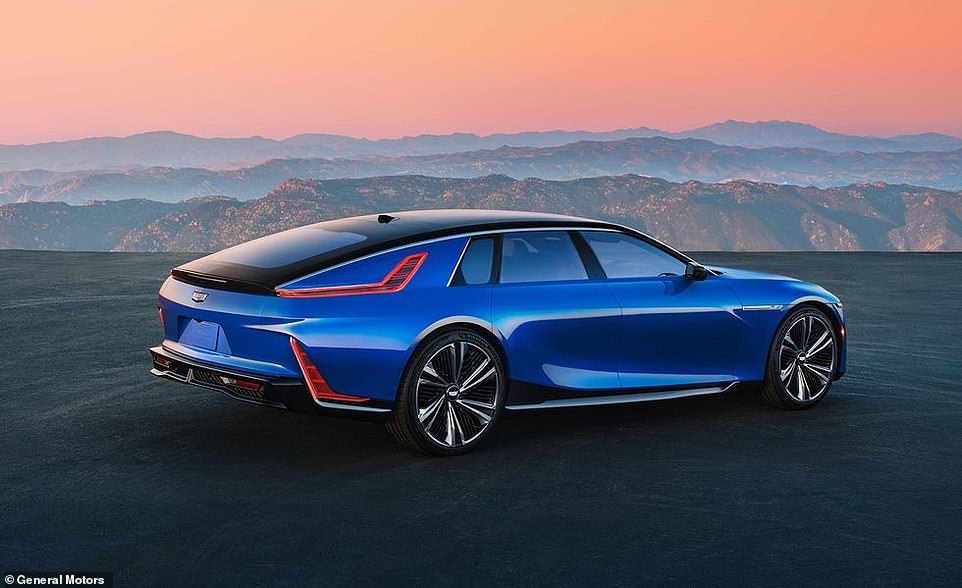 The futuristic Celestiq electric vehicle is not a traditional sedan like its pre-World War II predecessor, but is a long, four-door fastback that GM’s design boss Mike Simcoe said ‘there will be nothing like it on the road’ 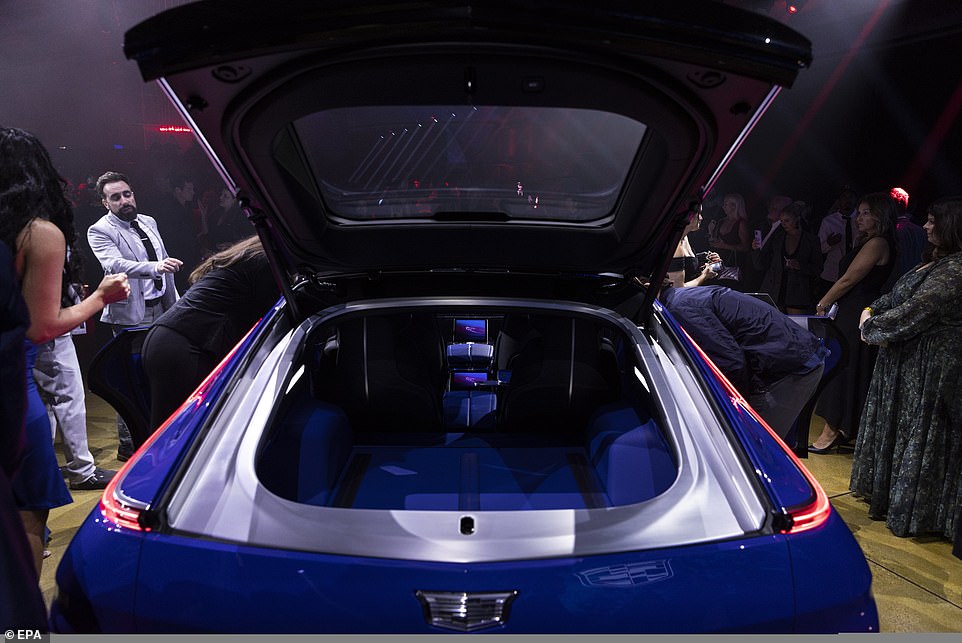 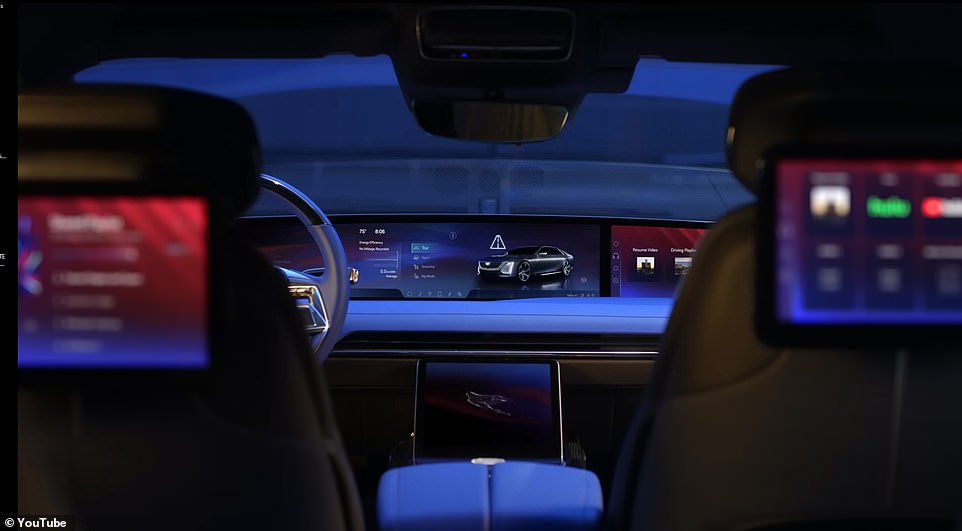 The 55-inch curved display stretches across the dashboard of the vehicle. There are also a pair of 12.9-inch screens facing the back passengers

All of the arm rests are heated and door pads are designed to create a ‘warm zone’ around occupants.

The Celestiq also comes with GM’s Ultra Cruise, a driving assistance feature that was first rolled out to its Cadillac models in 2020, which is a semi-automated driver assistance system that will lead to fully autonomous systems in the future.

Mark Reuss, president of General Motors, said that the Celestiq ‘ true flagship is what the brand has needed for a long time.’

In another nod to the brand’s history, the Celestiq will see the return of the Cadillac ‘Goddess’ hood ornament that has not been included on a vehicle since 1959.

Rolls Royce with its Spirit of Ecstasy ornament has been a distinctive feature of the British car brand since the early 1900s when such ornaments became popular.

The hand-built Celestiq, which goes into production late next year, has two things in common with the Sixteen: Customers can spec out the car in intricate detail, and it will be assembled in extremely low numbers. 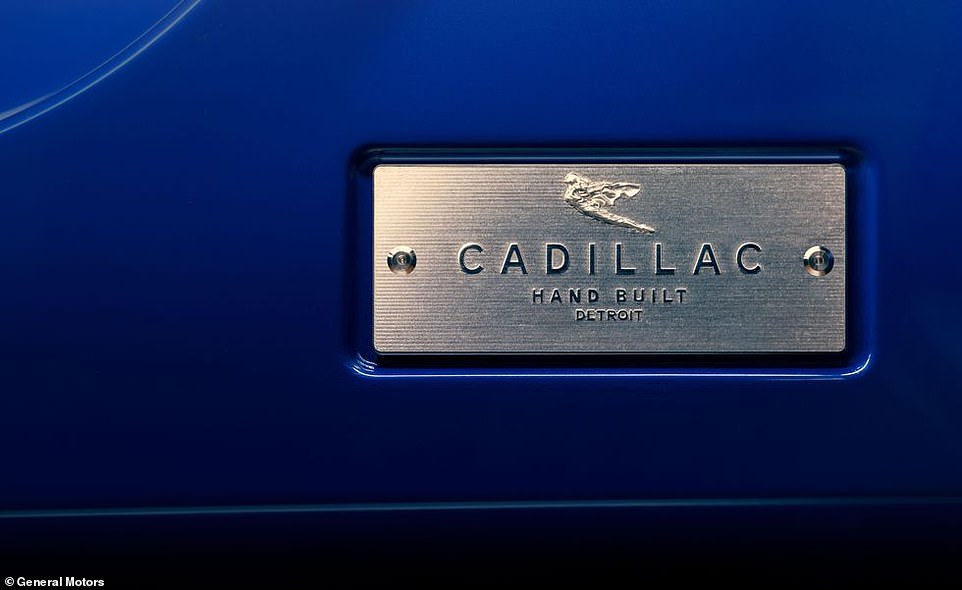 Buys can also add a personalized plate to the outside of the vehicle, similar to the Cadillac branded one shown in this image 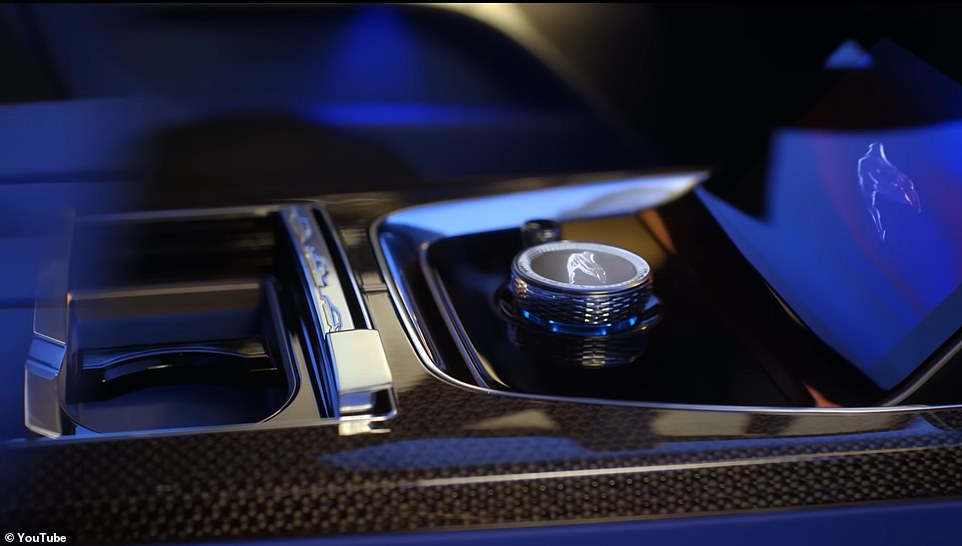 In another nod to the brand’s history, the Celestiq will see the return of the Cadillac ‘Goddess’ hood ornament that has not been included on a vehicle since 1959

GM built just over 4,000 Sixteens in Detroit during the Great Depression. The company says a new dedicated facility at its Warren, Michigan technical center can build two Celestiqs a day – about 500-600 vehicles a year.

The Sixteen could be ordered in 1930 in several body styles, including roadster, coupe, sedan and limousine. The largest of these measured 6.1 meters long – about 20 feet. The Celestiq is a tad smaller, but not much: 5.5 meters, or 18 feet.

The late historian Beverly Kimes noted that the 1930 Cadillac Sixteen Town Brougham was priced at just over $9,000, or roughly $163,500 in today’s money. 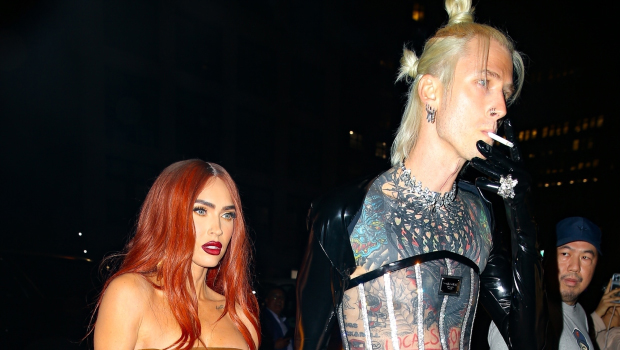 How scientists want to make you young again 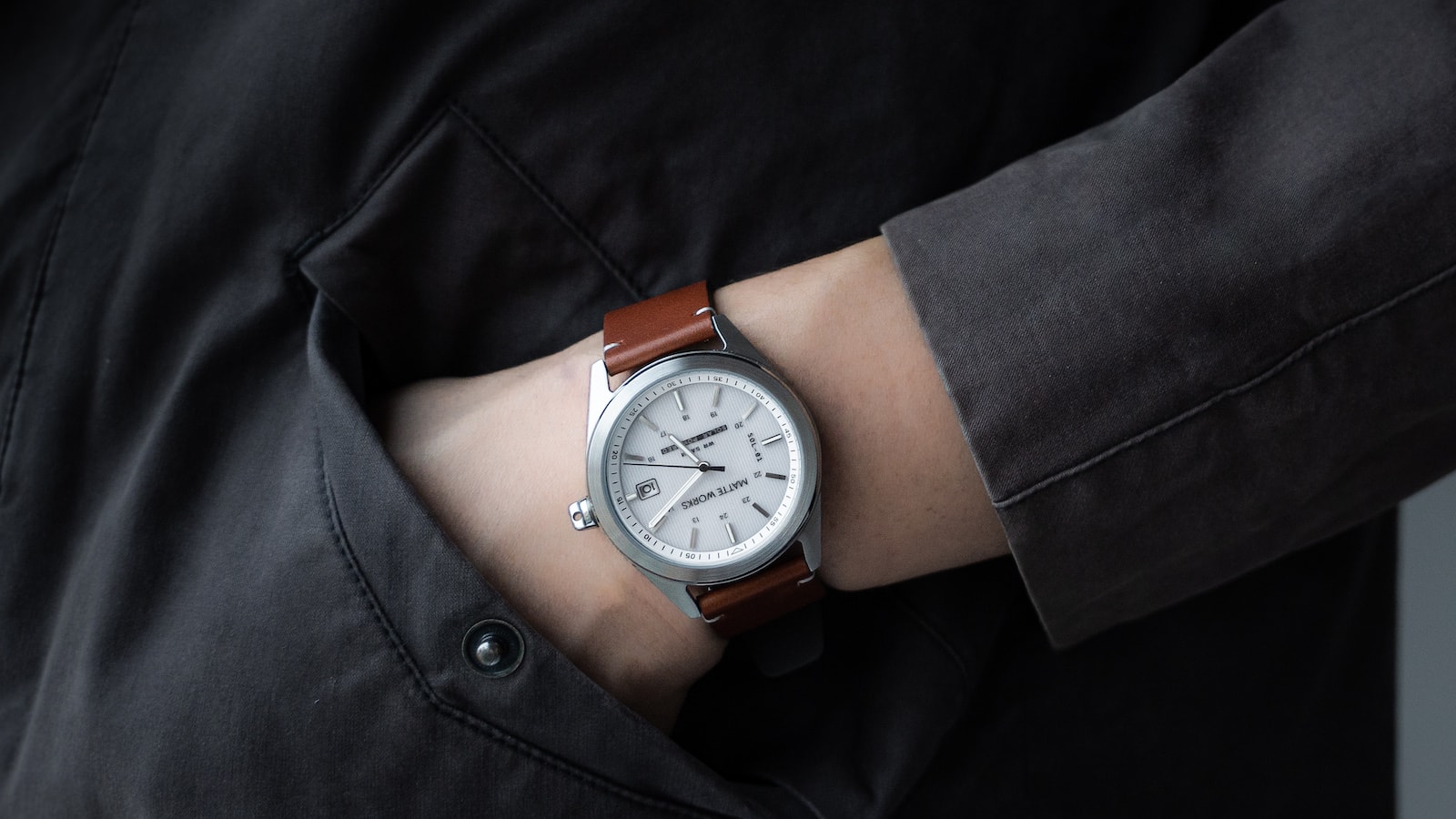