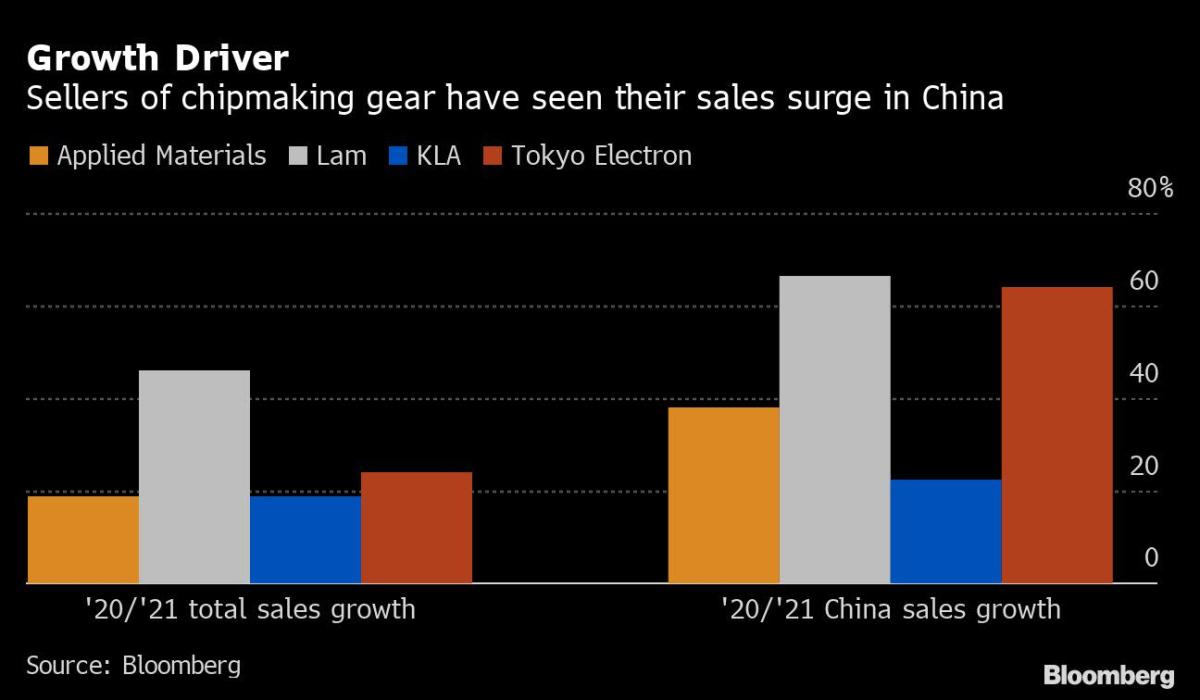 
(Bloomberg) — China’s semiconductor industry is showing signs of flourishing even in the face of Biden administration efforts to counter its growth, raising alarm bells in Washington.

Chinese orders for chip-manufacturing equipment from overseas suppliers rose 58% in 2021, making it the biggest market for those products for a second year running, according to data provided by industry body Semi.

While those figures appeared in April, the flood of machinery headed to China is now drawing more attention — especially as a legislative push to bolster the US chip industry with investments and incentives falters. The US Commerce Department, meanwhile, appears unwilling to crack down harder on Beijing, irking critics.

“If the Biden administration is serious about securing the semiconductor supply chain in the United States and allied and partner countries, it’s absurd to let the Chinese Communist Party buy up and stockpile the global supply of tools and equipment to make semiconductors,” said US House Representative Michael McCaul, a Republican from Texas.

The semiconductor industry became a key battleground during the Trump administration’s trade war with China. President Joe Biden then inherited a set of rules aimed at restricting some Chinese companies’ access to technology. While some parts of the US government want to extend that into a more blanket ban, others are resisting what they see as an unnecessary escalation.

The global chip shortage, which disrupted supplies of everything from cars to smartphones, further inflamed tensions. Biden ordered a review of supply-chain vulnerabilities last year and found that — while the US maintains a healthy share of chip design and manufacturing equipment — the industry is “highly dependent” on overseas sales, notably in China.

That dilemma is evident in the latest industry figures for 2021. Even in a year when worldwide bookings for equipment from the likes of US-based Applied Materials Inc. and Japan’s Tokyo Electron Ltd. climbed 44% — fueled by a global surge in chip demand — the growth of China’s chipmaking industry far outpaced other regions.

Some US chipmakers have expressed concerns that Chinese companies are paying above-market rates to obtain the machinery. They say that’s made it harder for US companies to get the equipment they need to expand domestic production, undercutting a core goal of the Biden administration. But the US government isn’t convinced intervention is needed.

At the center of the growing debate, the US Department of Commerce said it’s so far found nothing other than normal market forces at play. The department has enforced bans on some supply to Chinese companies listed as a threat to national security, including Semiconductor Manufacturing International Corp. But it’s avoiding dabbling in industrial policy beyond that.

“I hear a lot of concerns within the chip industry — and when I heard this, I looked into it,” Secretary of Commerce Gina Raimondo said in an interview. “Selling a commodity product to a Chinese company is in and of itself not problematic. If at any point we found evidence of preferencing Chinese companies, then we would take action to address it immediately.”

Raimondo in April summoned the CEOs of Applied Materials, Lam Research Corp. and KLA Corp. to explain the supply-chain data presented to her and answer accusations of favoring Chinese customers, people familiar with the matter said. National Security Advisor Jake Sullivan and National Economic Council Director Brian Deese were also present at the meeting. The executives provided data in follow-up meetings and appear to have convinced the Commerce chief that there’s no foul play.

“I don’t think anyone would want the US government to dip into the private sector supply chain and try to micromanage it if nothing wrong is happening,” Raimondo said.

That stance is too passive for many China critics, possibly including some within the Biden administration.

Saif Khan, technology director of the National Security Council, argued before joining the administration in favor of stringent export controls on semiconductor manufacturing equipment. The idea, he said at the time, was to make it difficult for China to make advanced chips, “largely preempting China’s development and use of many dangerous or destabilizing technologies.”

McCaul and others have advocated for tighter controls on equipment exports to China, either unilaterally or by working with allies such as Japan and the Netherlands — countries that together with the US control some 90% of the market for the most advanced chipmaking gear.

That’s not gone unnoticed in China and may be spurring the run-up in ordering, particularly at a time of shortages and increasing demand. Beijing is willing to provide the financing for many of the purchases, said Guarav Gupta, an analyst at Gartner Inc.

“They’re encouraging the domestic chipmakers to buy more, to get whatever you can right now because you never know when the US may place more restrictions,” he said. “Even if they require one tool, they will order three or four. Money doesn’t seem to be a problem.”

The beneficiaries include Applied Materials, Lam and KLA in the US, as well as Tokyo Electron and Netherlands-based ASML Holding NV. ASML is hiring more than 200 workers in China this year to keep up with growth there.

China is the largest consumer of semiconductors because of the size of its domestic electronics market and its status as production base for entire industries. Yet it is dependent on foreign companies for equipment, and the overwhelming majority of its output is several generations behind the most leading-edge chips.

“Keep in mind that more than 40% of the equipment spending in China is by multinational corporation operating facilities there to produce closer to the large contract assembly base,” said SEMI head Ajit Manocha. “Furthermore, the great majority of the installed base capacity for foundries in China is for lagging-edge technologies.”

Yet during the height of the global chip shortages, it’s exactly semiconductors made with lagging technologies that were in the most severe short supply. Carmakers and many other companies were scrambling to get enough of power management chips, display drivers and microcontrollers.

Even Apple Inc., the largest corporate buyer of semiconductors, was not immune. China’s increasing capability of making those could mean the world will come to rely on the country’s supply even more.

Gartner’s Gupta sees it as unlikely that equipment makers would prioritize shipments to China over their main sources of income: the world’s three largest chipmakers. Those companies — Taiwan Semiconductor Manufacturing Co., Samsung Electronics Co. and Intel Corp. — together account for more than 40% of gear purchases and are planning or building new plants in the US. Smaller companies may have to wait longer to get what they’ve ordered, Gupta said.

All the same, apart from ASML — whose extreme ultraviolet lithography machines are necessary to make the most advanced chips — all of the equipment makers saw sales in China outpace overall growth in 2021. Tokyo Electron reported the strongest China expansion, with sales from that market increasing more than twice as fast as its overall rate.

The Japanese company has fewer restrictions on what it can sell to China. US equipment makers are prevented from selling some cutting-edge tools to China’s top chipmaker, SMIC, because of its ties to the Chinese military. The Dutch government has yet to renew an export license for ASML to sell its EUV machines to China.

Even with the limitations, China has helped fuel booming sales for the industry over the past five years: ASML’s China revenue tripled, while KLA’s grew fourfold.

While the Commerce Department has received complaints from some chipmakers that Chinese companies are paying premiums to jump the line for gear, investigations have shown no evidence that’s the case, according to a person familiar with the process.

The major US chip-equipment makers, which may receive federal chip funding, are still unlikely to give up the Chinese market willingly. All have indicated they have the capability to avoid US sanctions by building capacity outside of America. 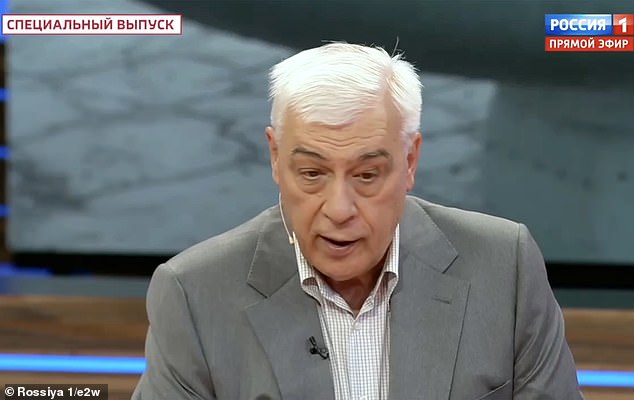 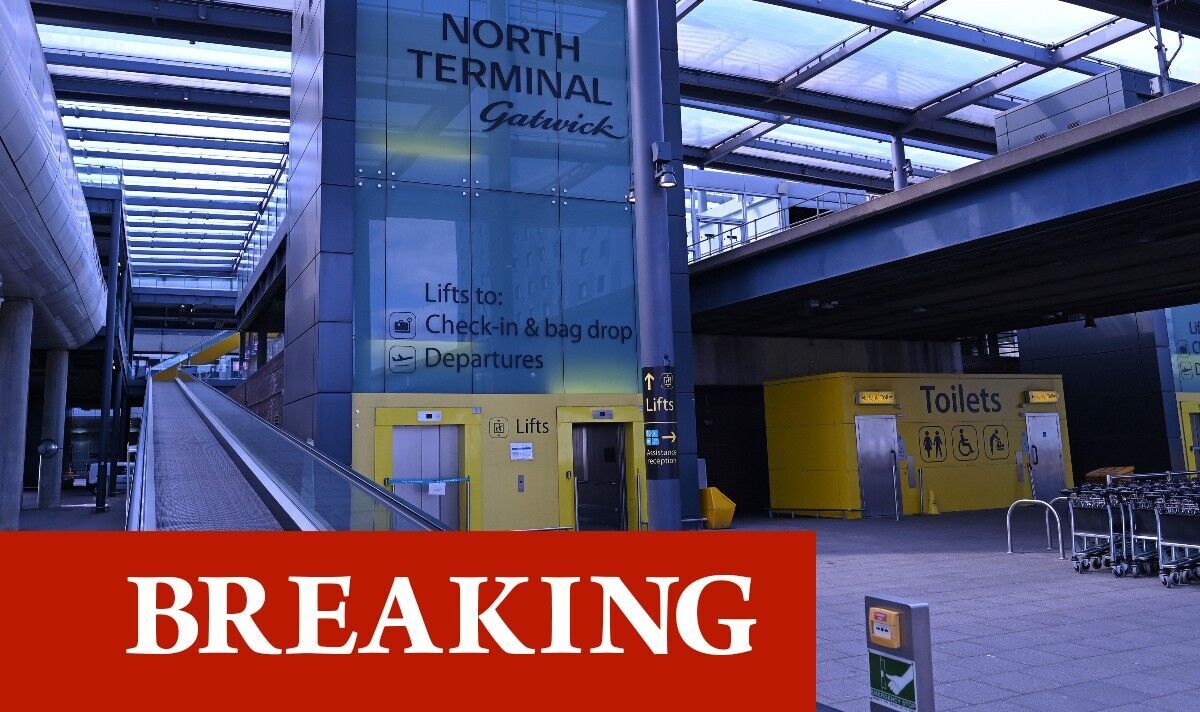 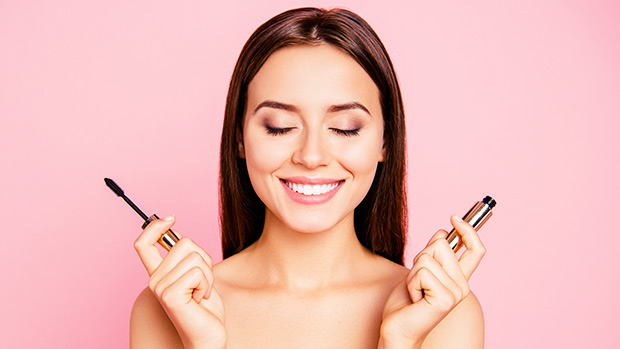